The year 2016 is officially over, and boy was it eventful! Before diving into 2017, let’s look back at what happened with The Modest Man in 2016. 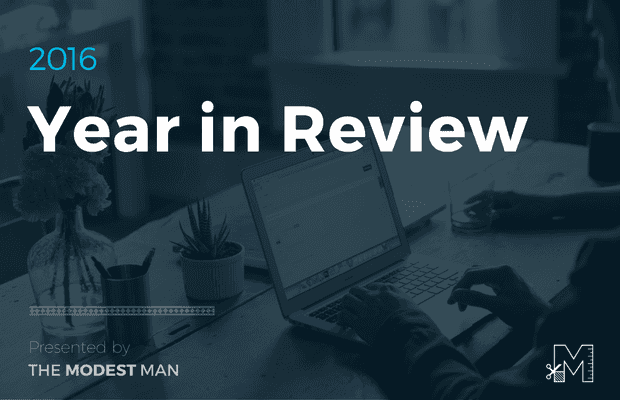 Here are my personal and business highlights for 2016:

➝ Traffic to TMM increased by 72% from 2015 to 1.4 million annual unique visitors

➝ I became an uncle

➝ I got to drive sports cars, shoot guns and drink bourbon with Aaron Marino, Antonio Centeno and a handful of other awesome entrepreneurs for “Man Camp 1.0” outside of Nashville

Many of these things wouldn’t have happened without your support, and I can’t thank you enough for that!

As you may know, I publish quarterly income reports here on The Modest Man.

I like to show you exactly how I make a living blogging and love being totally transparent about the business side of things.

I love the shape of this chart! Here’s a breakdown by category (total for 2016):

Keep in mind, this is gross revenue (before expenses and taxes). But still, this is the first year in which I’ve made a living running TMM – without any “day job” or freelance gigs.

I’ve been working toward this since 2012, so it’s a huge milestone, and it feels amazing.

Of the 50 new posts published in 2016, these three were the most popular:

As a content creator, you never really know what will be popular, so it’s always a good idea to look back and see what people are reading and enjoying most.

It’s nice to see some diversity amongst the most popular new content of 2016. We’ve got style (of course), dating and some very specific tips (buying small watches).

Publishing Schedule – I published a new post and sent an email newsletter every Tuesday in 2016, no matter what.

It’s the first time I’ve been able to stick to a publishing schedule, and I think it’s working out great.

YouTube – I finally started producing more (and better) videos for YouTube, and the TMM channel has started to grow.

What Did Not Go Well

Site Redesign – Another year has gone by, and this website still looks like it’s straight out of 2012 (because it is). It’s hard to commit the time and money necessary to redesign your site the right way, but it will happen in 2017 – I promise!

YouTube – Even though I’ve made some progress with video, there’s SO much room for improvement.

More Videos – In addition to publishing one new blog post each week, I’d like to produce at least one new video. Sometimes, the video will go with the post, and sometimes it won’t. Either way, I’m going to hit “upload” more often.

New Website – It’s happening. The wheels are in motion. I just need to finalize the specs give my designer and developer the green light. Stay tuned!

Double Revenue – In the not-too-distant future, I’d like to hire a full-time employee (or three), and that requires lots of cash. For that reason, I’d like to double revenue from TMM in 2017.

None of these things are possible without you. Whether you’ve been in the TMM family since day one, or you just started following along, I can’t thank you enough for your readership and support.

Thank you, and Happy New Year!

What are your goals for 2017? Leave a comment below!

Want to Start a Blog?

I created a short, free e-mail series to show you how to get started the right way - from choosing an idea to picking a great name and making your website. It's everything I wish I knew before starting The Modest Man!

Thanks! Now check your email (look for a message from [email protected]).