If you’re an over 40 years old male and want to dress better than most 20-somethings, this post is for you!

First off, a disclaimer: despite “old man style” being in the title of this post, being over 40 doesn’t mean you’re old.

Also, being an older guy doesn’t mean you have to dress a certain way.

The way you dress is influenced by your lifestyle. What kind of work do you do? Do you follow a specific dress code on a daily basis?

But for most older men, age does play a role in personal style. You don’t want people to think you’re trying to look younger.

This is even more complicated for older guys with non-average builds (like shorter guys). One of the big issues you run into is the difficulty of finding clothes that fit.

Unfortunately, many brands that really focus on fit are targeted at younger men – or even teenagers.

For example, brands like Zara, H&M and ASOS tend to carry fitted clothing in smaller sizes. But are these brands really appropriate for men over 40?

If you’re an older gent and want to wear “younger” clothing, that’s totally fine! But if you want to dress in a more traditionally “age appropriate” way, this post will help.

First off, here’s a quick list of specific things to avoid, assuming you don’t want people to think you’re trying to look younger:

Come to think of it, most men should avoid most of the things on that list. But some things (like super distressed jeans) are especially inappropriate for older, more mature gentlemen.

For example, look at Robert Downey Jr., who is 5’8″ and 57 years old (at the time of writing). He likes to wear with suits, which could be an attempt to look young and hip.

But it has the exact opposite effect, making it look like he’s trying to be something he’s not.

It’s like when a little boy wears a suit and tie. It just emphasizes how young and small he is.

So what should you wear? To figure that out, let’s look at six examples of men in their 40s, 50s and 60s (and older) who are doing it right.

George is a well known television personality, and he understands how to dress the part.

When he’s working, George often wears suits (which are likely custom, or at least tailored for a better fit).

George’s style is safe, sharp and age appropriate. It comes off as self-aware but effortless, and he’s a great example of how older gents can dress.

His casual game is on point too. I really like his layered, smart casual outfit above.

Ralph Lauren is one of the most famous fashion designers of all time. He’s 82 years old at the time of writing, and he happens to be a shorter guy at just 5’6″.

He doesn’t shy away from double-breasted jackets or light colors – two style choices that short men are often told to avoid.

Lauren also prefers classic silhouettes (i.e. straight leg pants), and he’s a great example of older gents wearing blue instead of grey for a more youthful look (more on that below).

Daymond John, founder of FUBU and my personal favorite shark, knows a lot about fashion and business.

One thing I really admire about Daymond’s style is his attention to detail. For example, even when slim ties and small knots (like the four in hand) were all the rage, he bucked those trends.

Instead, Daymond wears wider ties (and lapels) and uses bulkier knots (like the half Windsor), which compliment his broad neck and chest.

This is a great example of ignoring a trend that younger men may be tempted to get on board with, especially when it doesn’t suit your body type.

It’s these small, seemingly insignificant choices that can take your style from good to great.

Also known as The Sartorialist, Scott Schuman is the fashion photographer that made street style photography so widely popular.

He’s been documenting real style “in the wild” on the streets of NYC and around the world on his blog for years, and he’s become pretty famous for his work.

But his own style is pretty remarkable too, which is dually impressive since he stands well below average height (probably somewhere in the 5’3″ to 5’5″ range).

Scott’s style is mature and understated. His color palette is simple and relatively neutral, and his clothes fit properly. What else do you need?

Here’s a man who has deep knowledge and understanding of menswear. He knows all of the rules, and he loves to break them.

Wooster is constantly pushing the envelope with his style. Even his more traditional getups are characterized by one or two bold elements.

Here’s the thing: I’m not saying you should try to dress like Nick Wooster.

I just wanted to include him because he’s a great example of having fun and expressing yourself with what you wear.

He’s over 60 years old. Sometimes he dresses the part, and sometimes he doesn’t, and that’s what I love about him.

Style is inherently personal, so make sure to do what you want with it!

I reached out to three of the most stylish males over 40 I know to get their top tips for older guys who want to dress sharp.

Here’s what they had to say:

In my opinion, the singular style tip that works universally for most guys is to wear dark solid colors.

There are several benefits to wearing dark solids. Firstly, most dark solids work well together when they’re paired up in an outfit. 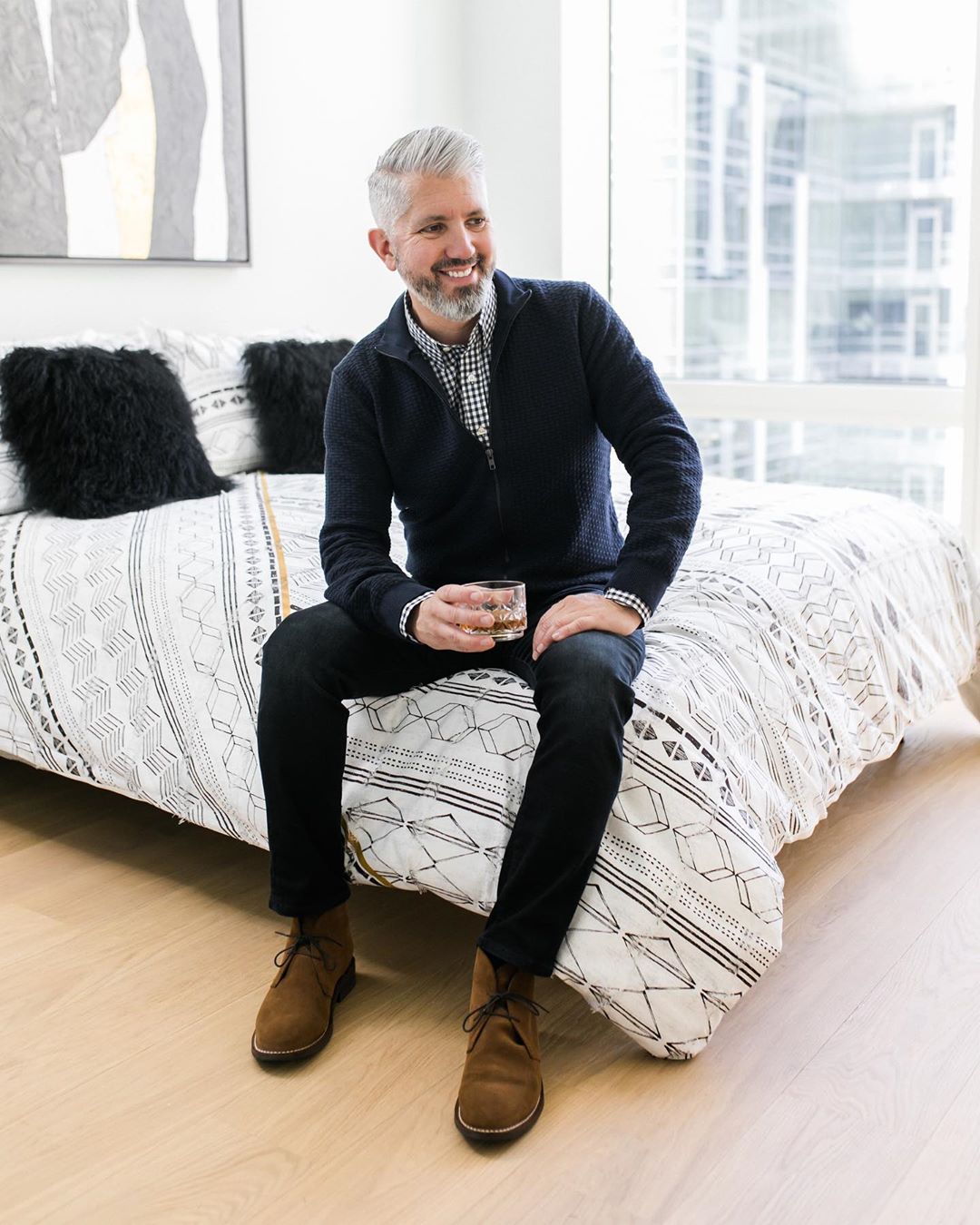 Second, mixing shirts with pants becomes a lot easier because you don’t have to worry about which half to wear a pattern (trousers or shirt). 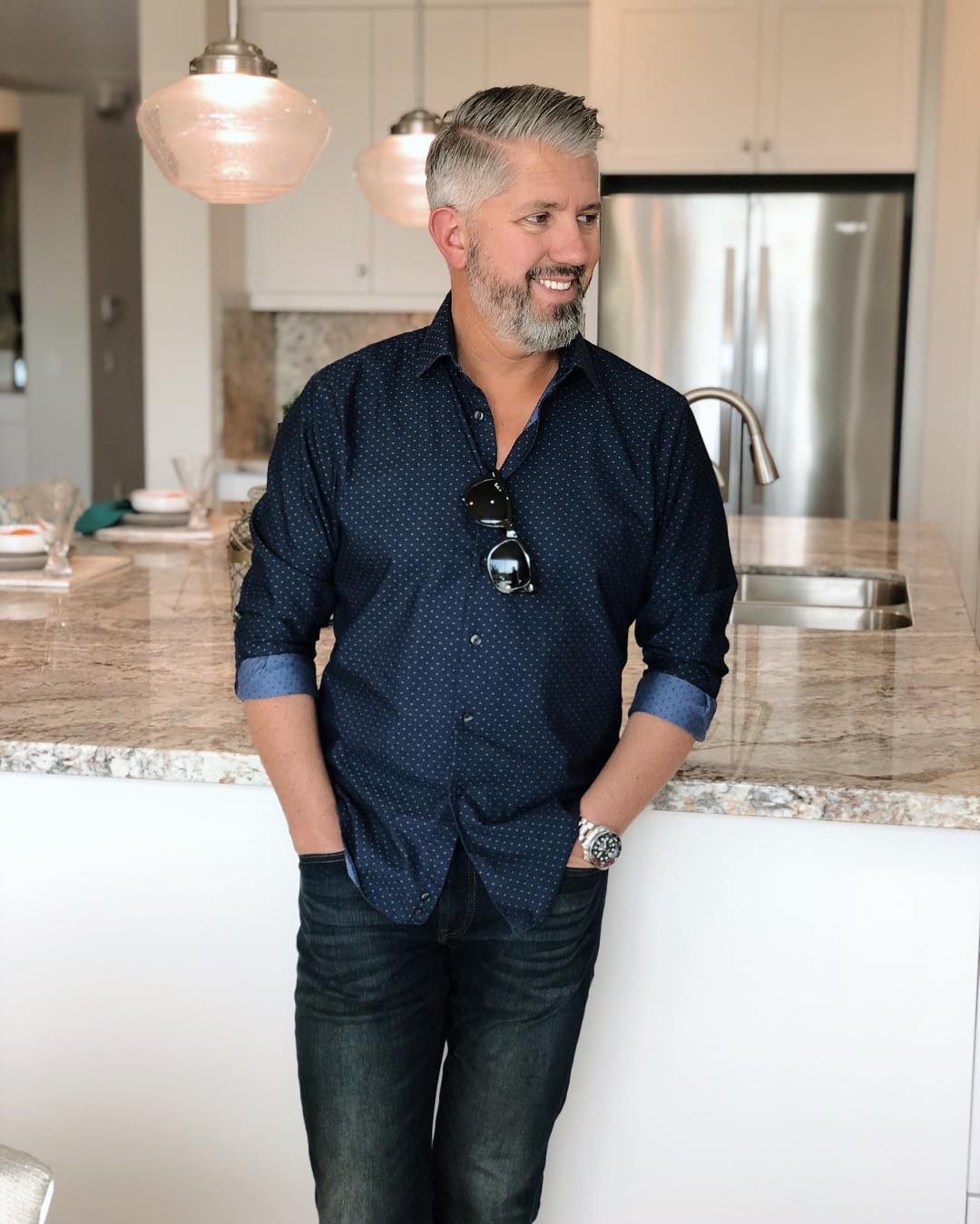 Third, dark colors are in fact slimming making you appear more trim. Light colors reflect light and have a bulking effect that can give the illusion that you’re bigger than you actually are.

Darks have the opposite effect. 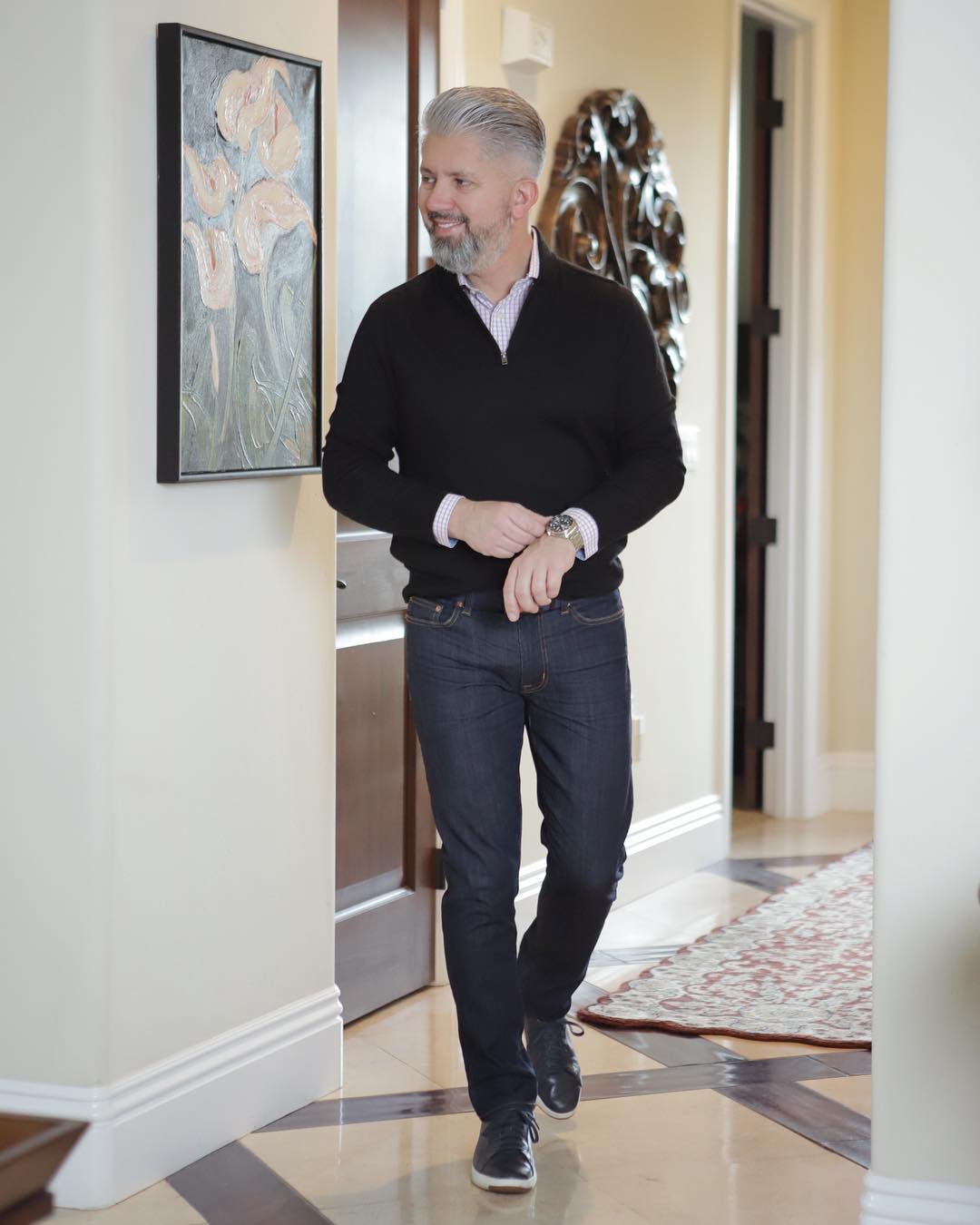 Visualize your favorite James Bond (for me it’s Daniel Craig). He looks like a badass wearing black, and the costume designers know this, so they put him in darks a lot for the movie.

He’s supposed to look mysterious and expensive, which wouldn’t be the case in a light tan suit or a loud pattern shirt.

Now, I’m not saying you should wear all black all the time, but try to experiment with dark blues, dark browns, dark burgundy and black. 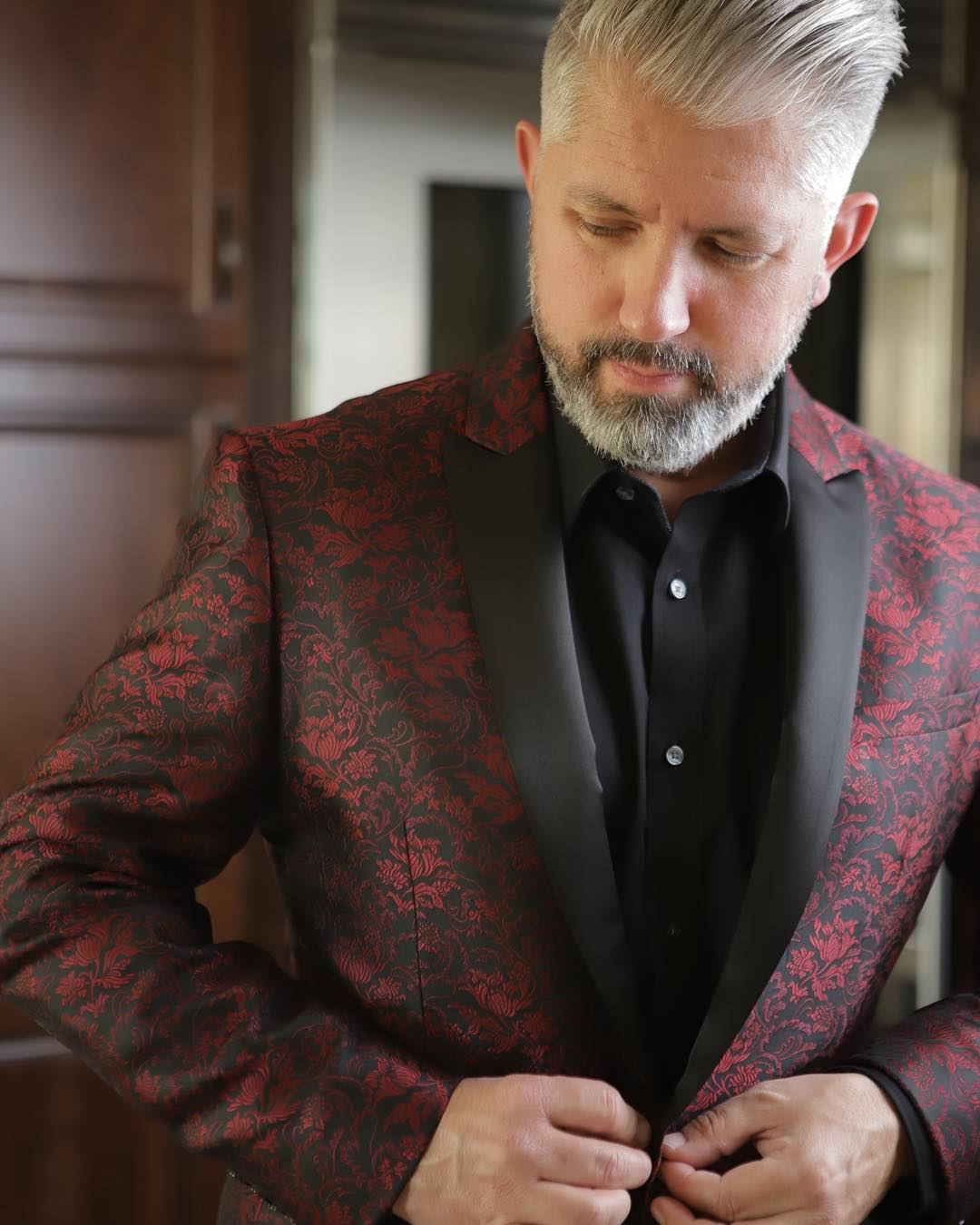 If you want a place to shop, I suggest looking at Nordstrom and Banana Republic for age-appropriate clothing.

I want to give all of my fellow mature, studly gents a valuable style tip which will boost your confidence and prevent you from looking like your grandfather. 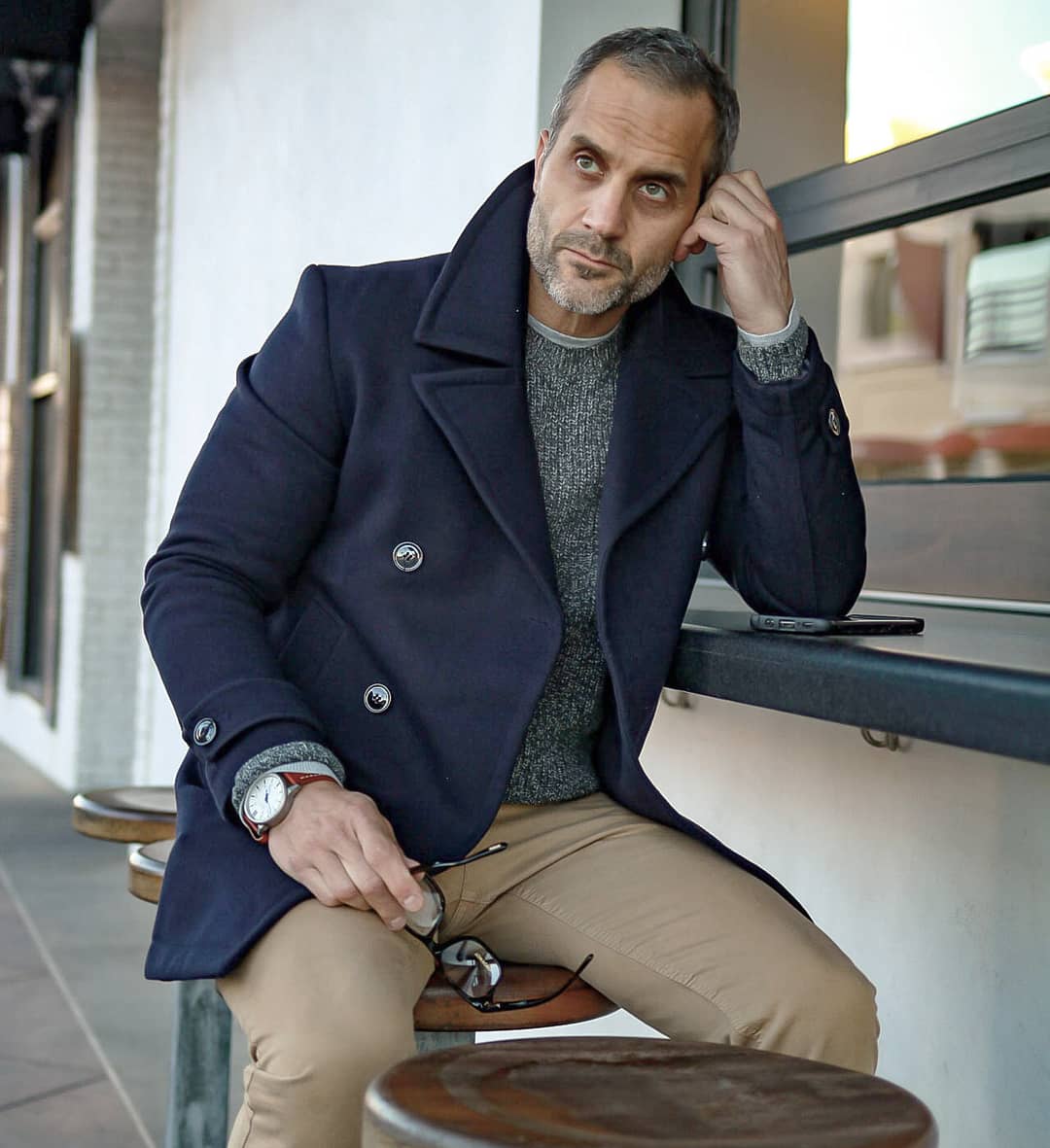 You’ve likely heard or read it somewhere before but I’m here to remind you in 2020:

It just isn’t attractive, and they’re not a fashion statement unless you’re a streetwear guy. And to be honest, none of us in our late 40’s and 50’s should be attempting a streetwear look.

Instead, get yourself a few nice pairs and colors of casual , one in plain white and another in black. It’s that simple! 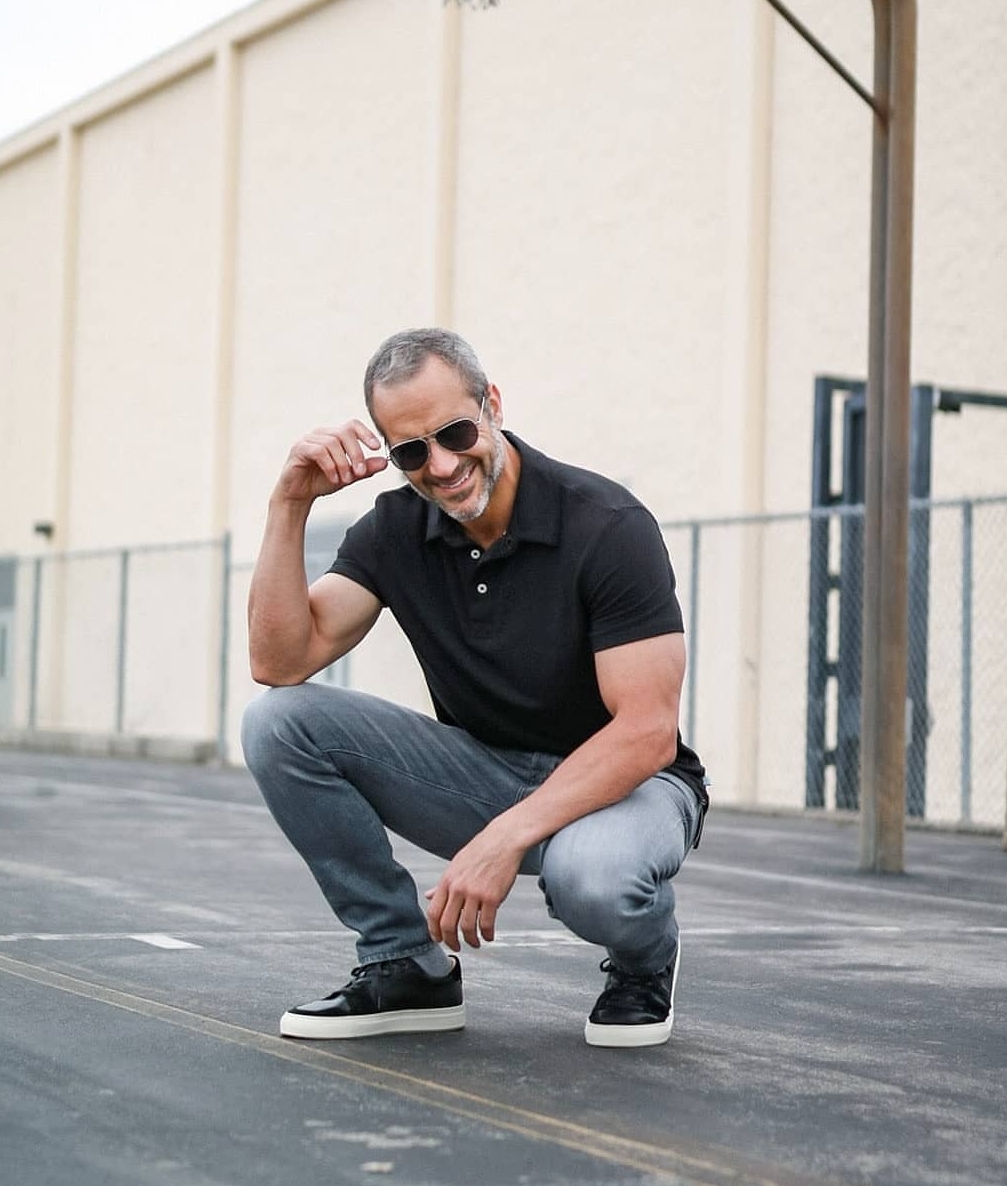 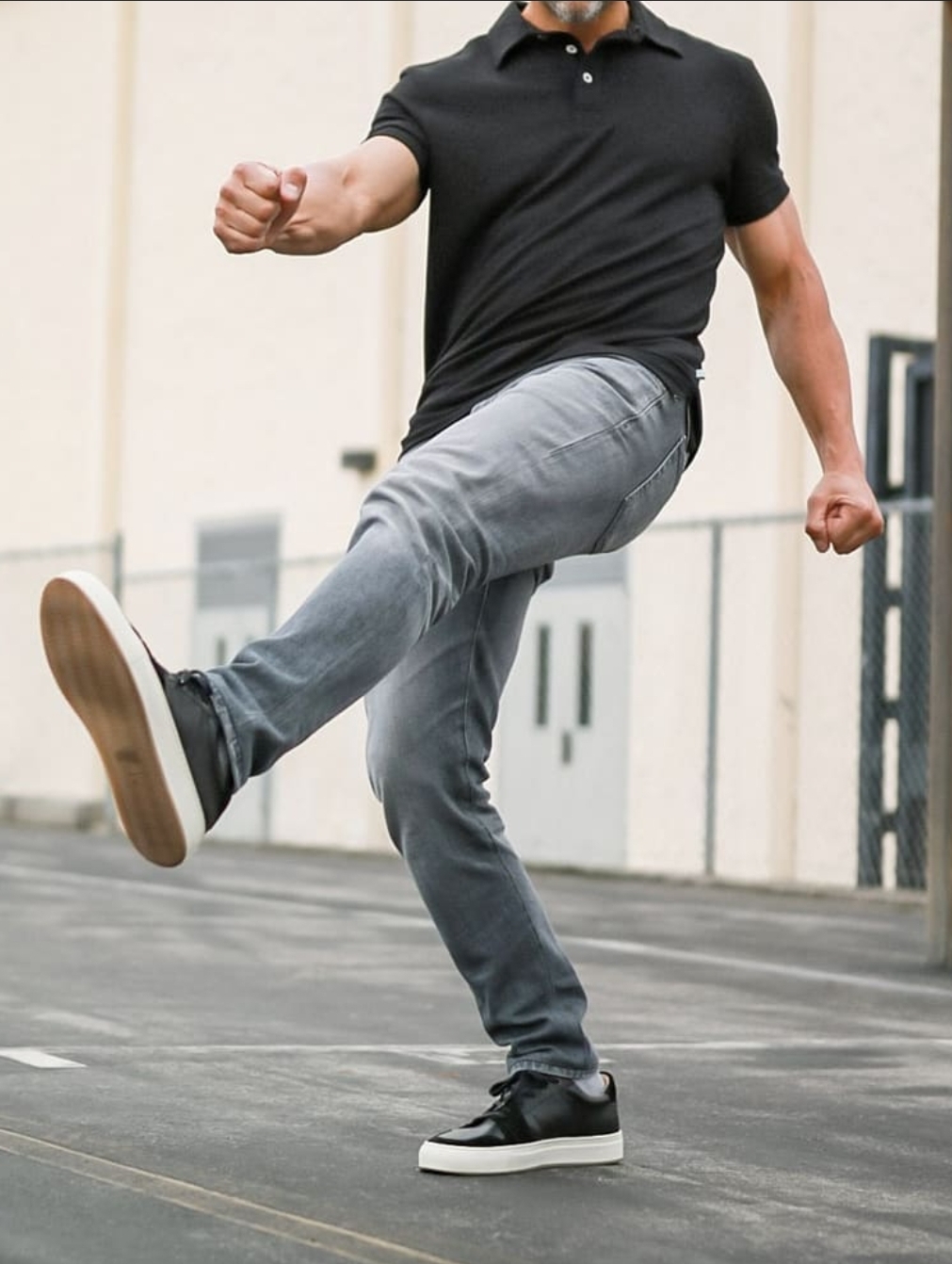 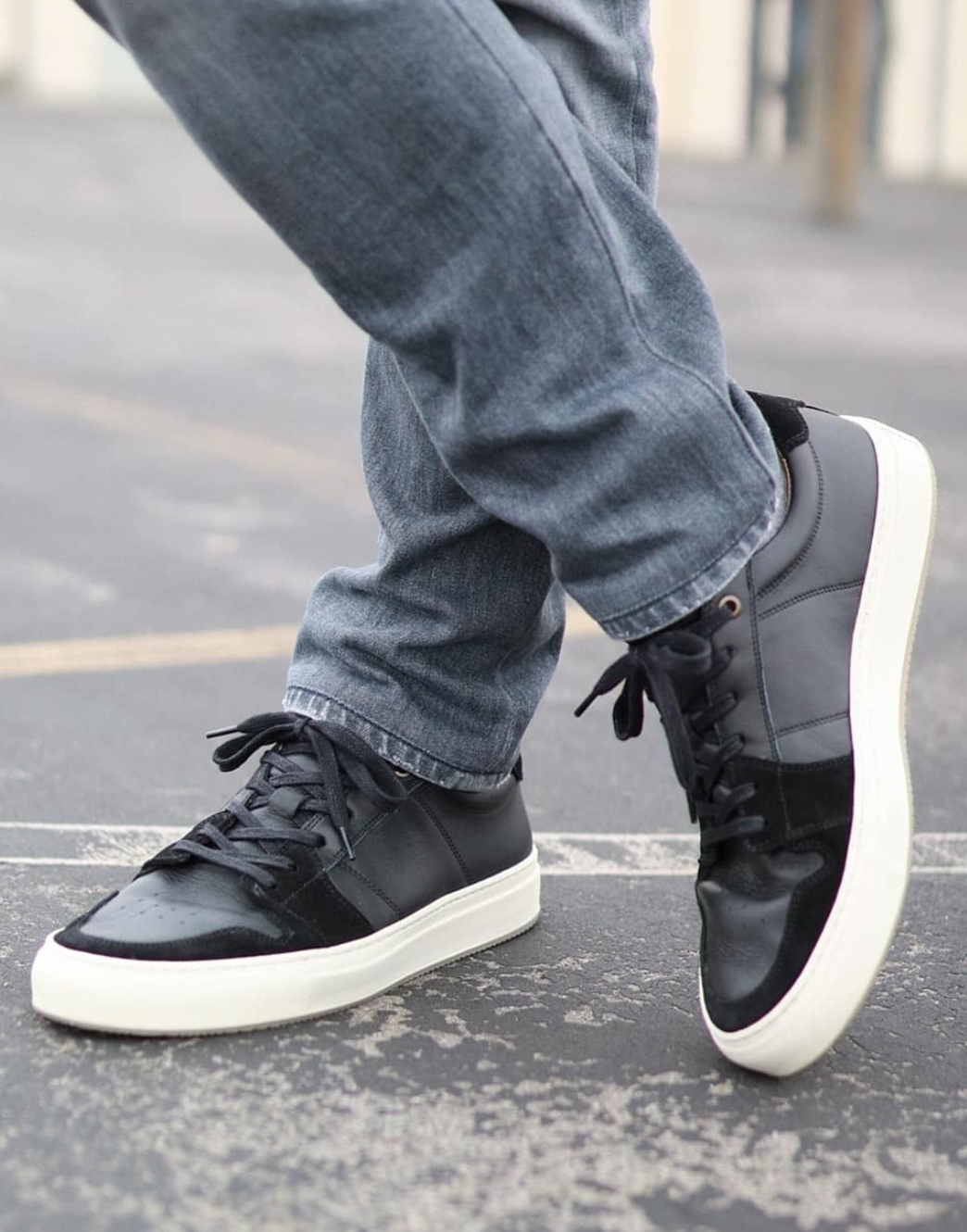 That’s all you need to step up your footwear game when you aren’t wearing dress shoes.

My style advice for guys over 40 would be to invest in high quality, classic essentials like a navy blazer, dark wash denim and brogues – while remaining aware of current trends. 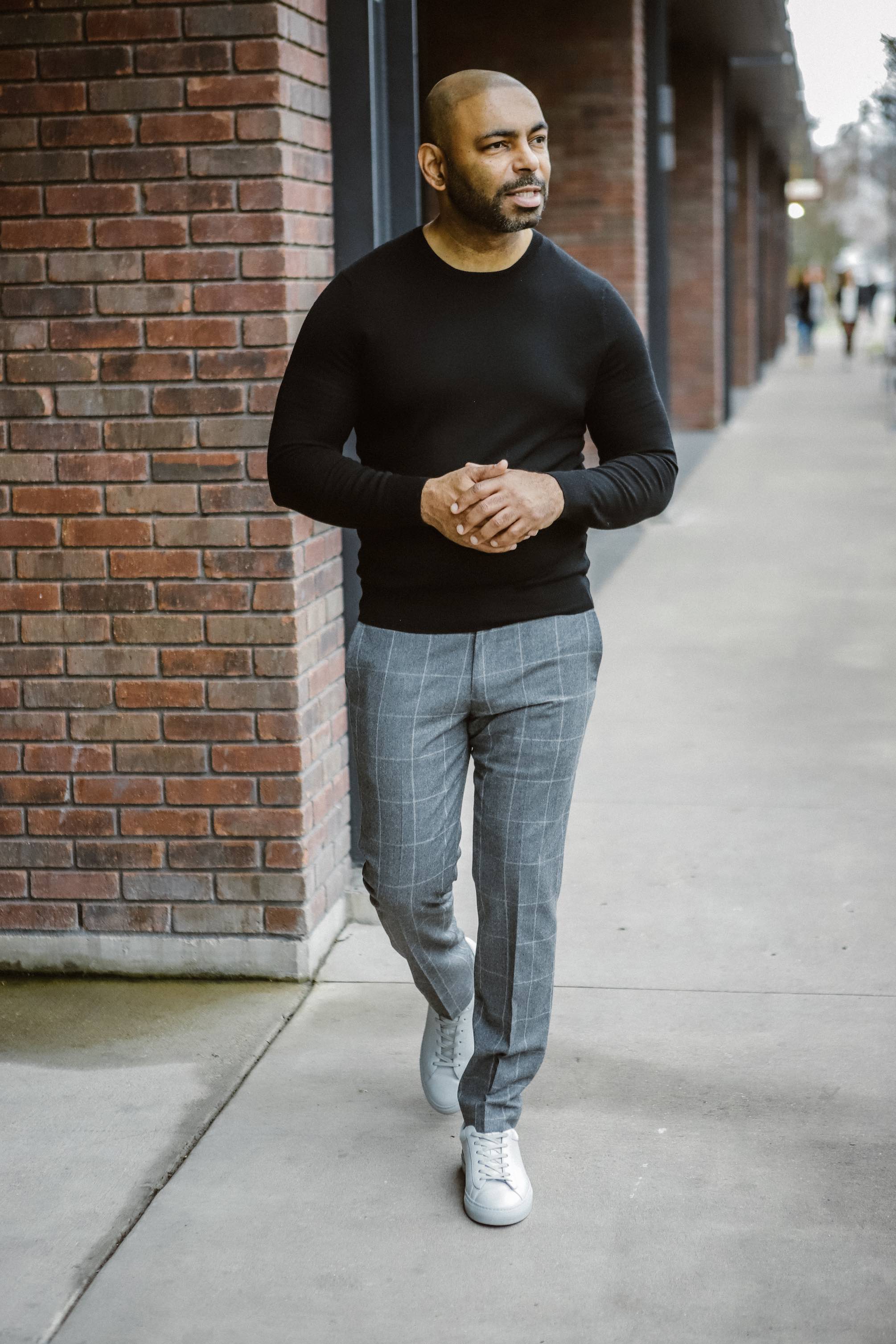 You should not chase trends, but you should be in the know. Adopting the subtle fluctuations of silhouettes, colors and small details will have you looking well-seasoned and in season. 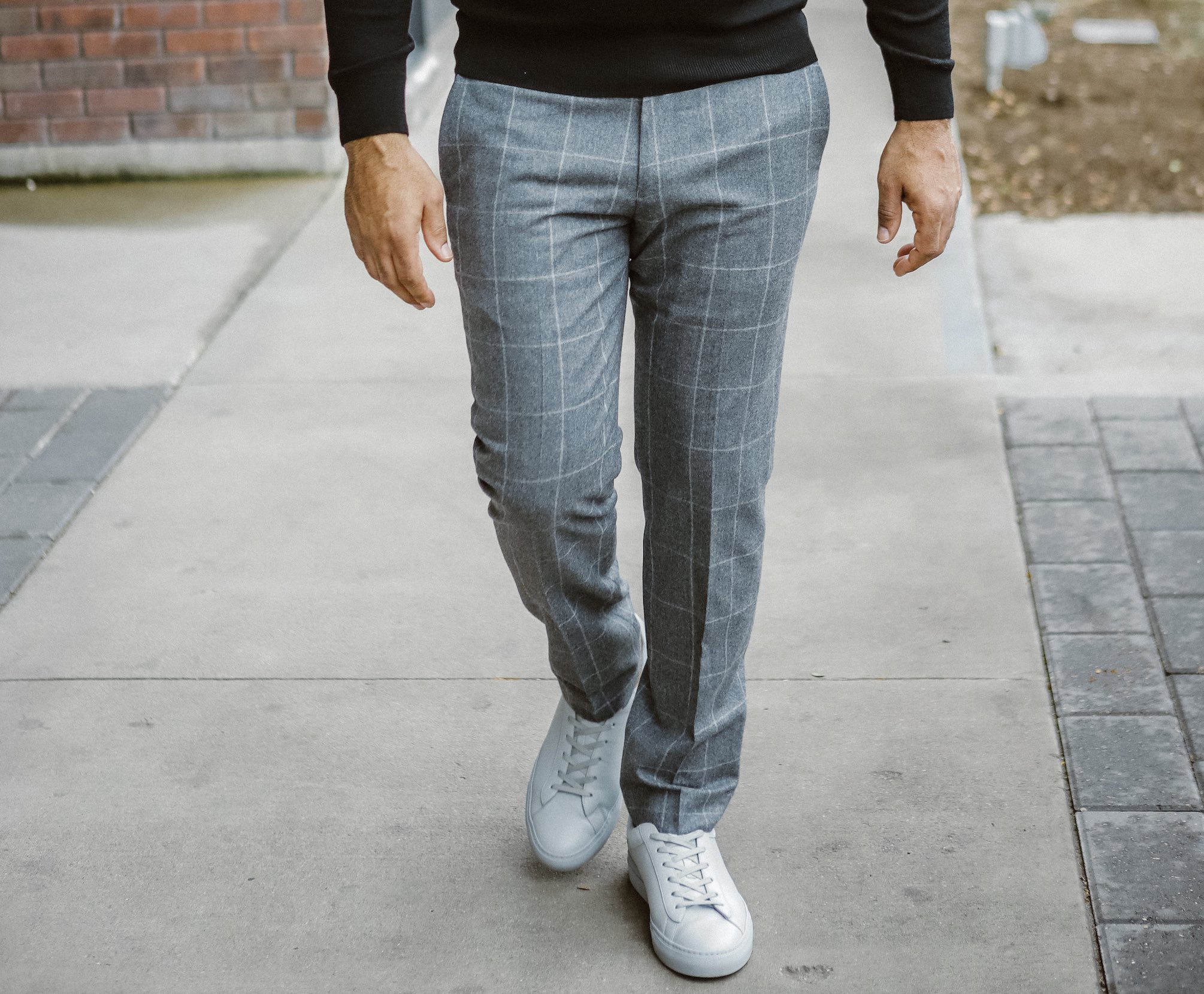 Two of my favorite brands for men over 40 are Uniqlo (great for clothing basics) and Beckett Simonon (high quality, essential footwear with a timeless aesthetic, without designer prices).

How to Look Younger (as a Man)

There are a few subtle things you can do to add a youthful touch to your look – without being blatant about it.

First off, you can wear navy or blue instead of charcoal or grey. This especially applies to suits.

Blue is appropriate for any age, but it’s a decidedly younger color than grey (see Ralph Lauren above).

You can add small “pops” of color to your outfit. They can be subtle or bold (like Nick Wooster’s yellow shoes).

Either way, you’re showing people that you’re not just a boring old man.

Feel free to go wild with accessories. Get a trendy new pair of glasses from Warby Parker. Add some funky ties and colorful socks to your collection (but avoid “novelty” socks).

This is one area where you can get away with less traditional choices.

Been clean shaven for a while? Try the scruffy look. Had a beard for the past few years? Shave it all off!

If you’re hair is still healthy, grow it out. If it’s been long for a long time, get a clean, modern haircut.

And make sure to take care of your face. Use moisturizer with SPF and anti-aging cream. Trim those eyebrows, nostrils and ears.

While clothing fit is extremely subject to trend, slimmer silhouettes have been in style for years and probably aren’t going anywhere, at least not anytime soon.

This is great because it’s a very flattering look on most guys, including men over 40 and over 50 years old.

So be sure to get your clothes tailored: shirts taken in, pants hemmed, sleeves shortened. Trim the fat out of your garments for a younger, leaner look.

There are many clothing brands for men over 40, 50 and beyond.

In fact, most mainstream menswear brands cater to this demographic because, well, older guys have more money.

You’ll want to avoid brands that are unapologetically aimed at younger males, including fast fashion brands like H&M, Zara and Pacsun.

Instead, try sticking with men’s clothing brands that emphasize a more timeless aesthetic and middle-of-the-road fit.

Any of the above brands will work for men over 40. It just depends on your budget and aesthetic.

But you can’t go wrong with the menswear brands listed above.

Questions About How to Dress In Your 40s

Here are answers to some of the most frequently asked questions about dressing well as an older man:

Should men over 40 wear jeans?

Yes, men over 40 can and should wear jeans. Just make sure they’re slim-straight and tapered (not skinny or relaxed) and don’t have any rips or overt distressing.

What should a 40 year old man wear to a nightclub?

Always check the dress code of whatever club you’re going to. In general, slim dark wash jeans or slim chinos with a casual button down shirt work well for a nightclub. Wear minimalist leather sneakers or Chelsea boots, and complete your outfit with a nice watch, necklace and/or bracelet.

A 50 year old man can wear a hoodie, but outside of the gym or doing yard work, I wouldn’t recommend it. Instead of a hoodie, wear a simple sweatshirt, wool sweater, cardigan or overshirt.

How should a 50 year old man dress casually?

A 50+ year old man should dress casually in slim-straight jeans or chinos, solid color tees, polos or untucked button up shirts, and tasteful outerwear (like a Harrington jacket, leather jacket or bomber). For shoes, keep it simple with leather boots, casual loafers, or plain leather or suede .