This is a detailed, hands-on review of the Thursday Boots Captain, an entry-level dress-work boot for men.

Note: this review has been updated to include long-term insights on Thursday’s Captain Boot. There are many new entry- and mid-level boot brands to choose from these days. We still recommend the Captain as the best Goodyear welted “work” boot under $200. You can also read our long-term Thursday Boots Duke review.

Deciding to Buy Some Boots

I was never into boots, and my familiarity with brands only extended vaguely into Doc Martens and Timbs. One of the main reasons for this was that the clunky footwear aesthetic didn’t really appeal to me.

Come to think of it, I never really paid attention much to my footwear. Aesthetics were secondary to fit and comfort; I was usually content to rotate through my pairs of Chuck Taylors and leave it at that.

But I decided that a pair of dress-work boots (or dressy “service” boots) would be a good addition to my wardrobe.

Now I just needed to choose the right pair for my budget, so I did what anyone would do: I turned to the internet…

After doing some research online, I realized that there were many brands to choose from, at many different price points. I scoured the net and found out there were different boot tiers in terms of price, but not necessarily quality. Since I was just a beginner boot buyer, I considered choices from tiers 1 ( $200-300) and 2 ($300-400).

A lot of people mentioned that the Iron Rangers were a good entry-level Goodyear welt boot. I got a lot of variable answers and feedback regarding sizing and learned that the break-in period was pretty challenging.

I eventually came across Thursday Boot Co. (a.k.a., Thursday Boots) after seeing them mentioned on a handful of men’s fashion YouTube channels and Instagram accounts. One other thing all of these vloggers kept mentioning was how Thursday Boot Co.’s direct-to-consumer model allowed them to offer good quality products at a great price point.

I was intrigued. I took a look at their offerings on their website and fell in love with the Captain model. It was sleek, but at the same time, the toecap gave it just a bit of personality.

I decided to pull the trigger on Thursday’s Captain Boots, but I had some trouble deciding which color to buy…

If I was going to buy some Thursday Captains, I figured the brown colorway would be the most versatile (something that could work with both dark-wash denim and chinos). I also considered brandy and Arizona adobe, but brown seemed like the safest choice in terms of wearability.

My main concern was not being able to try these boots on. If I got the wrong size, international return shipping would be a pain. The official Thursday website advises picking the same size as your other boots/dress shoes or sizing a step down from your . I decided to take the plunge, ordered a pair of size 11 Captains, and had it shipped via Johnnyair (which was recommended by a relative).

This turned out to be the right size, which was a relief!

The boots arrived in a few weeks. I noted that the shoebox was in near pristine condition. The boots, much to my excitement, looked as advertised on the website.

Examining the leather uppers, I didn’t see any signs of loose grain or creases.

I loved how the brown color had a slight tinge of burgundy, giving the boot a deeper and richer look. I didn’t find any loose threads in the Goodyear welt stitching, and it was uniform throughout the length of the boot.

I wear medium-thick socks and putting on the boots, I was glad I picked a size 11, as they felt pretty much true to size. The toebox had just the right amount of room and didn’t feel too tight.

There was a tiny bit of heel slip at first, but this was quickly remedied when I adjusted the shoelaces. Walking around, the arch support felt good. I’m not an outdoorsy type so I can’t really speak as to how they’ll perform on a hiking trail, but the Dainite-like outsoles provide pretty good grip in suburban environments.

In my experience, Thursday Boot Co. Captains are really durable for a sub-$200 boot. Plus, they can be resoled by any competent cobbler.

Here’s how a pair of Thursday Captains in brandy looks after 1 year of wear, courtesy of nbanksbass on Reddit:

Will these boots look brand new after 12 months of hard wear? No way!

Will they age as well as Aldens or even Wolverines? Definitely not.

But you get what you pay for, and these boots are pretty affordable for full-grain leather and Goodyear welt construction.

Also, with a little bit of care — using shoe trees between wears, avoiding daily wear, using leather conditioner every few months — you can prevent the most obvious signs of aging.

Any Goodyear-welted boot will have some water resistance built in, but Thursdays Captain Boot is not waterproof.

This means that your feet will stay dry if you get caught in the rain or step in a puddle.

But if you thread through a creek or wear these boots to shovel snow, water will eventually seep in.

What to Wear Thursday Captains With

This type of boot goes really well with casual pants like jeans and chinos.

I wouldn’t wear them with shorts or dress pants, although they could work with thick wool/flannel trousers during fall or winter. 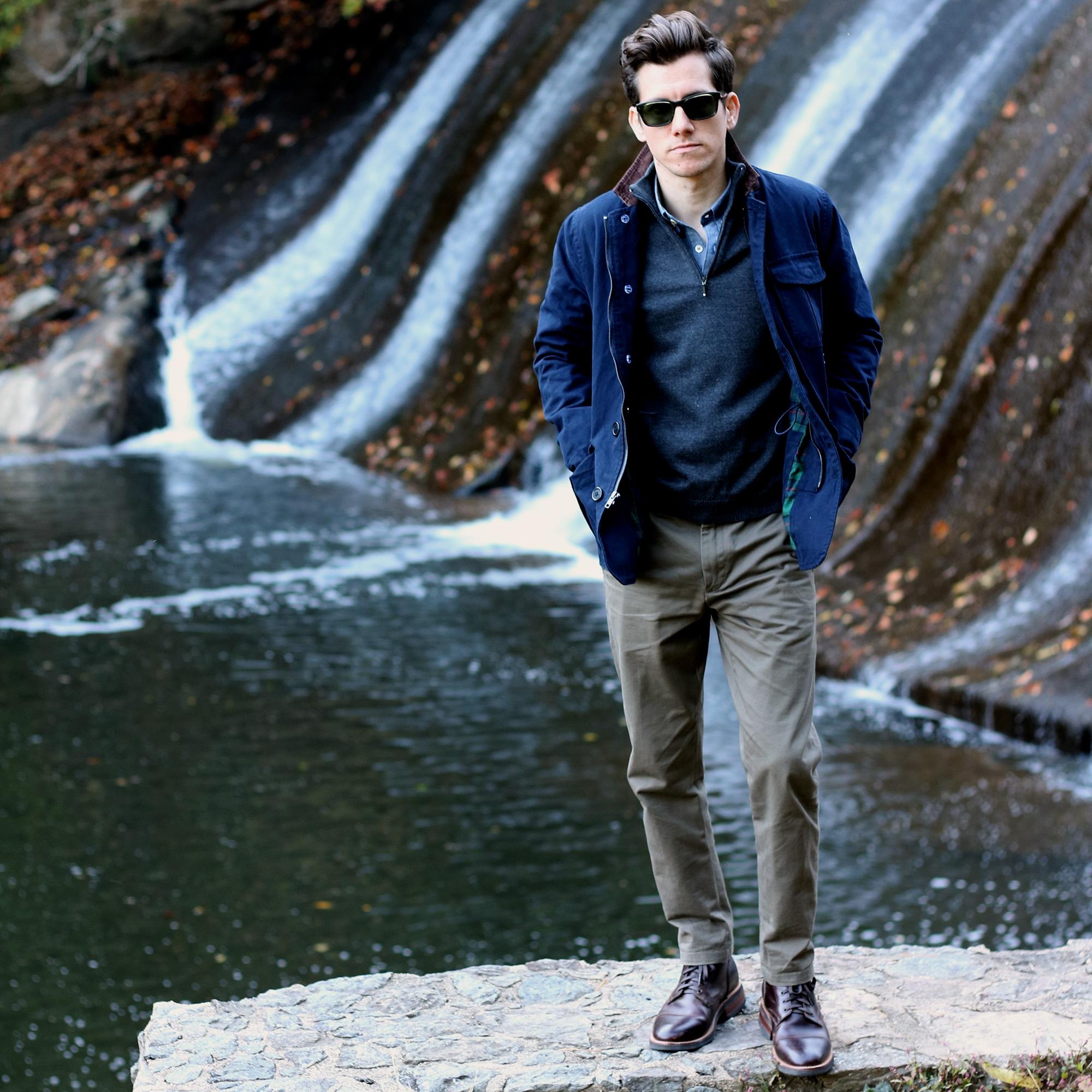 They’ll look great with any sort of outerwear, from field jackets to wool overcoats.

The Thursday Boot Co. Captain and President are virtually the same boot. The “big” difference between these two models is the design of the toe box.

If you’re torn between these two boots, don’t overthink it. You can’t go wrong with either one. It really just depends on whether or not you prefer the extra design detail on the toe or not.

Here are answers to some of the most commonly asked questions about Thursday’s Captain boots:

Yes, Thursday Boots are comfy, and most people experience an easy break-in period compared to other boot brands.

How Tall Are Thursday Captain Boots?

Thursday Captain boots will give you a 1.5″ height boost due to the heel and outsole.

Can You Get Thursday Boot Captains in Wider Widths?

Yes, Thursday Captains are available in regular (D) width and wide (EE/EEE) widths, and a wide variety of sizes.

Does Thursday Boots Use Real Leather?

Where Does Thursday Boots Get Their Leather?

Thursday Captains are water resistant but not waterproof. This means they can withstand rain and puddles but not submersion or trekking through the snow.

Can Thursday Boots Be Worn in Snow?

Some Thursday Boots can be worn in the snow, but the Thursday Captain boot is not a snow boot.

Why Are They Called Thursday Boots?

Thursday Boot Co. named its brand after the day of the week, Thursday, because it’s the unofficial start of the weekend.

Over the succeeding months, I’ve used the boots a couple of times per week. They’ve really conformed well to the shape of my feet. The top finish (Thursday chrome, similar to chromexcel) is notorious for scratching, but this is easily dealt with by cleaning it with a horsehair brush.

Overall, I’m happy with my purchase and think the Thursday Boot Co. Captain can be a really good gateway boot into the world of Goodyear welted boots.

If a fellow newbie boot-buyer asked if I had a specific entry-level boot to recommend, I would have no hesitation recommending the Captain, you’re certainly getting your money’s worth.

I’ll definitely buy another pair of boots from Thursday Boots in the future.

Kyle finds joy in rock and roll music, books and comics. He loves a great pair of boots and would definitely wear more jackets if it wasn't so hot outside.