The first item you should pick up is a set of lifting shoes. They are relatively inexpensive and will keep your feet flat with a little but of lift in the heel. The second item of importance is a weightlifting belt. 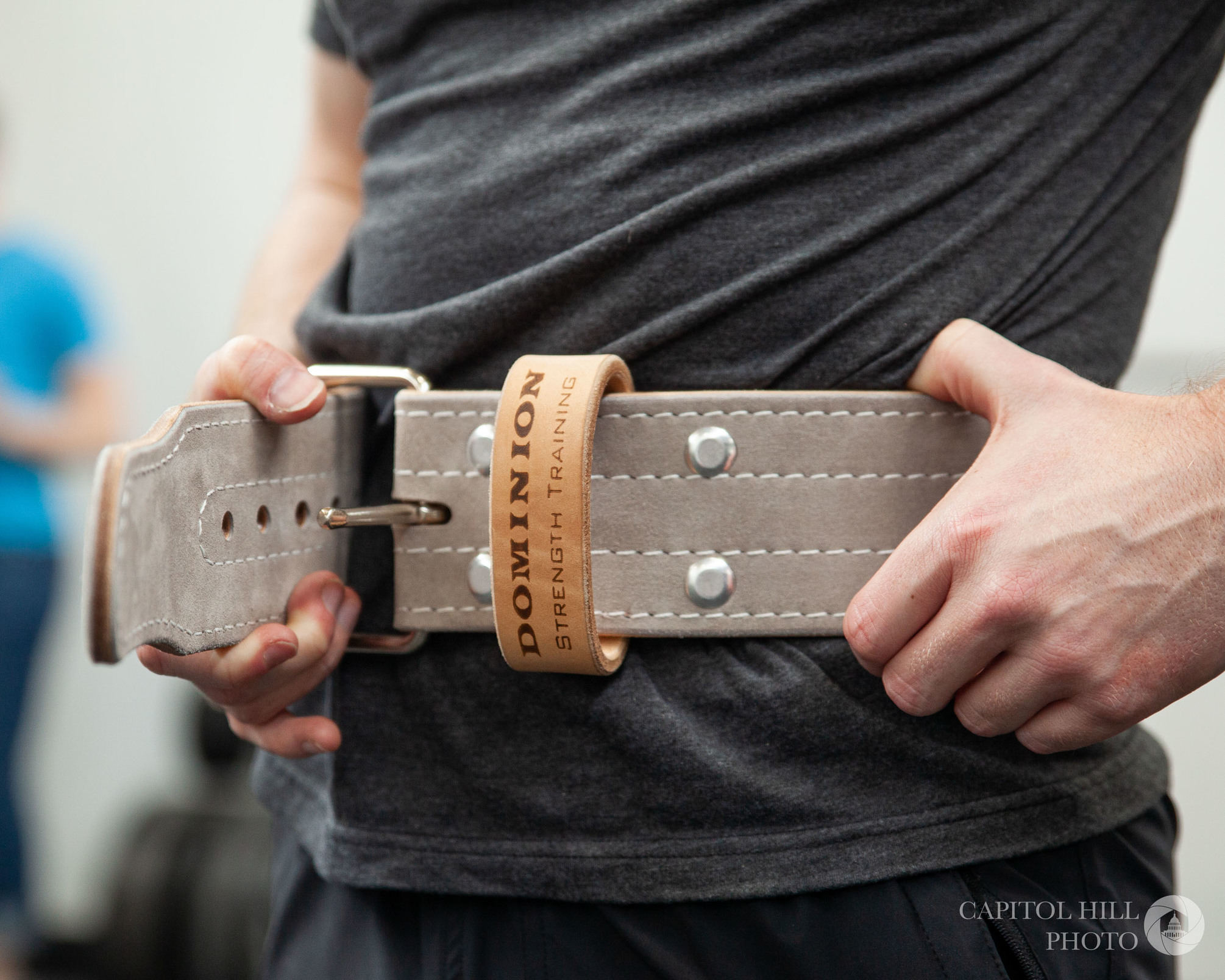 Today, we’re going to review a belt from Dominion Strength. As an avid listener of the Barbell Logic Podcast, I came across Dominion Strength Training., as they were a featured in one of the episodes.

After learning that the company was a small family owned business, I decided to reach out.

Why Do I Need a Weightlifting Belt?

For many years, there was a conventional wisdom out there that belts were a crutch and should not be used for any form of exercise if one wanted to develop a strong core. 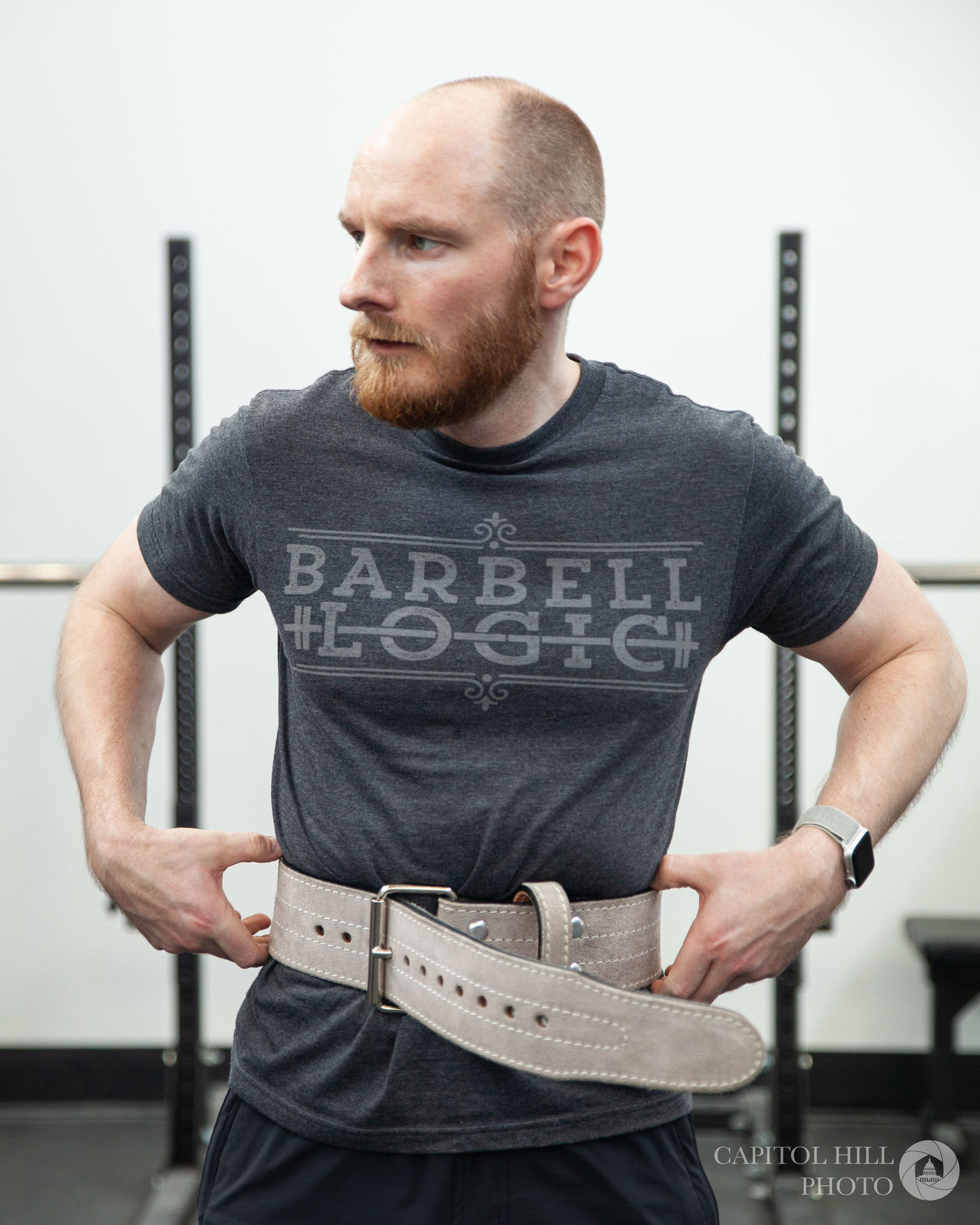 Once the bro science subsided, people used actual science to prove that belts are beneficial for use in many exercises. Which is harder? Flexing your abs against the air or having them push against something? That’s Physics 101.

Want to Get Stronger?

You don’t have to do it alone. We strongly recommend Barbell Logic Online Coaching.

More affordable and convenient than a personal trainer – but just as motivating – it’s the best program for anyone who wants to start making real progress.

Use the code Modest for $79 off your first month, and get started today!

Your body works as a complete system and by taking a deep breath, using the Valsalva maneuver, you are engaging the entire core, not just your abs or lower back.

This is crucial for keeping your spine in the correct position. People mistake the belt as a crutch because nearly all lifts become easier. 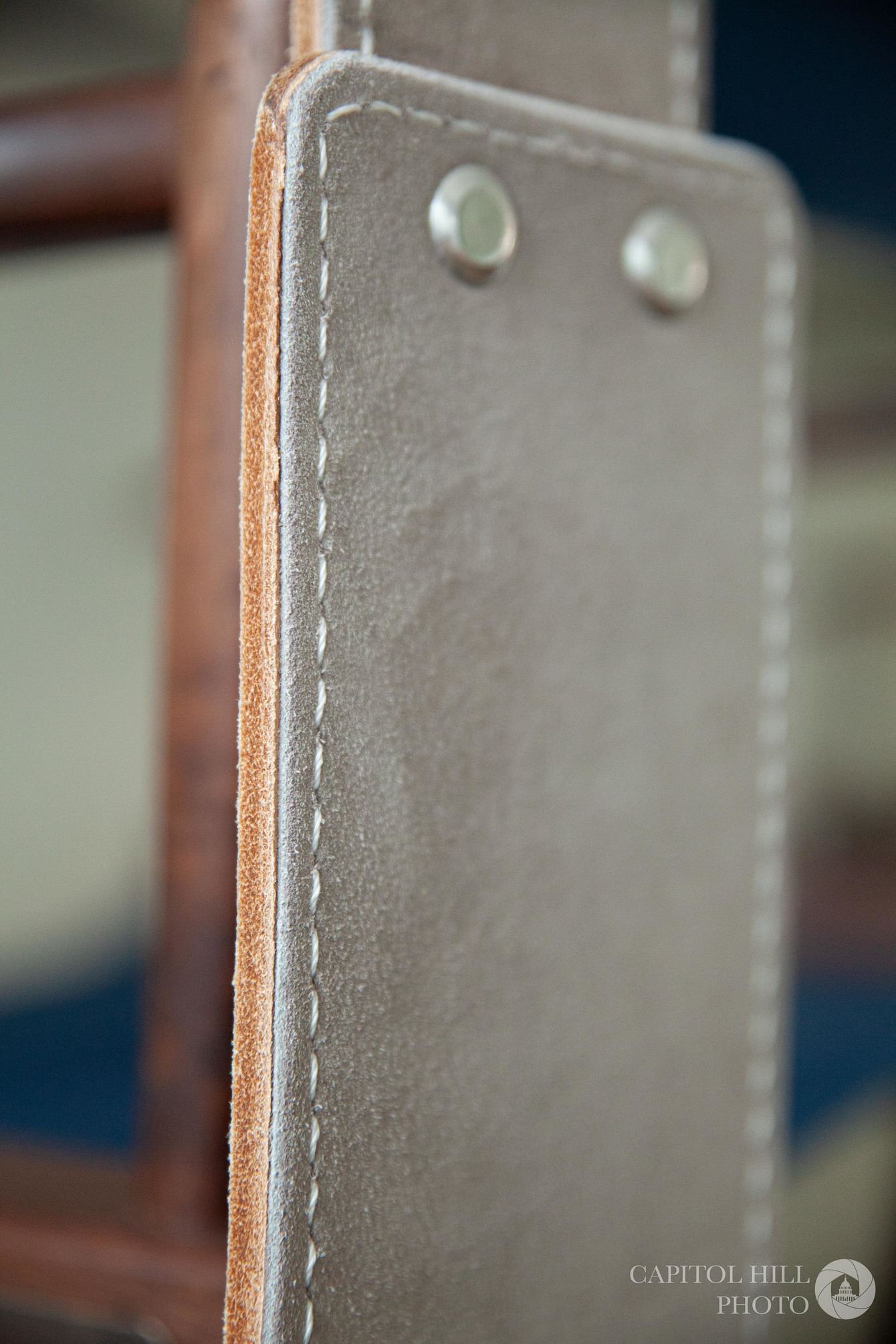 The pressure should be distributed evenly so if you see a belt with a thicker backside or it’s so thin it can be folded along the short side, you are looking at a company that fundamentally doesn’t understand basic physics much less strength training. A belt like this could get you seriously injured.

I use a weightlifting belt for the squat, deadlift and press. For standing accessory exercises such as a barbell curl, the belt provides me with a ‘cue’, a mental reminder to lock out my core, hips and knees to prevent energy leaks and focus on the muscle I am training.

I love telling the story of small business owners and entrepreneurship, people who take risks to provide value to society. The money is always an afterthought when it comes to following a passion. 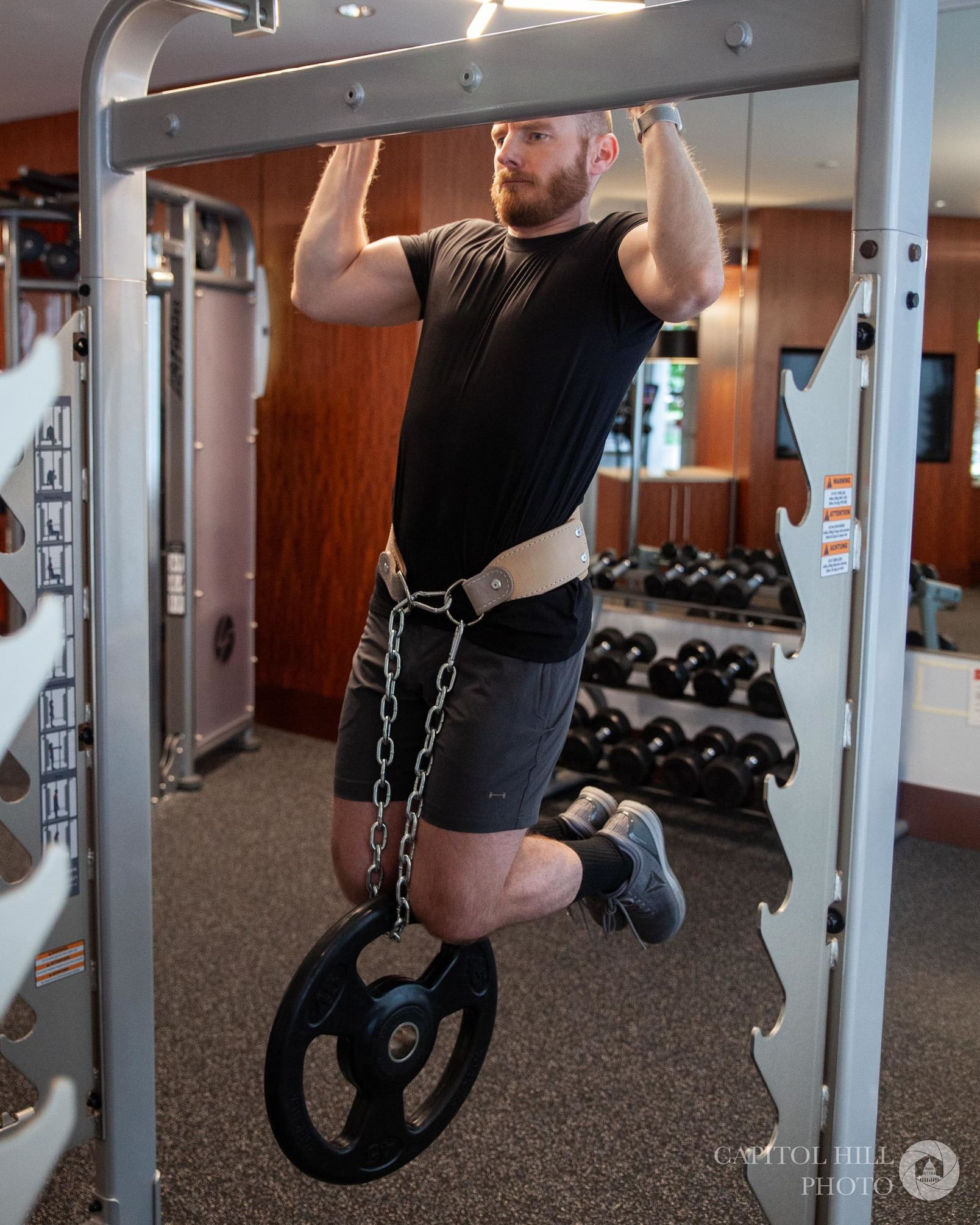 Dominion Strength is owned by Blake and Katie Roache. They manufacture the belts down in Orlando, Florida. He’s a mechanical engineer by trade and she’s a microbiologist.

As crossfitters, they moved into Starting Strength training and discovered that they could not find a quality belt on the market.

Their move into making belts started with a botched attempted working with overseas suppliers who sent them 1000 belts with inferior hardware that was rusted upon delivery.

That mistake led them to move the entire concept to the U.S. I think they made the right move…

While Dominion has several belt designs, this review is on their original design, a 3-inch, single prong belt. It has grey suede on both sides which gives it a good feel but also helps keep it in place. 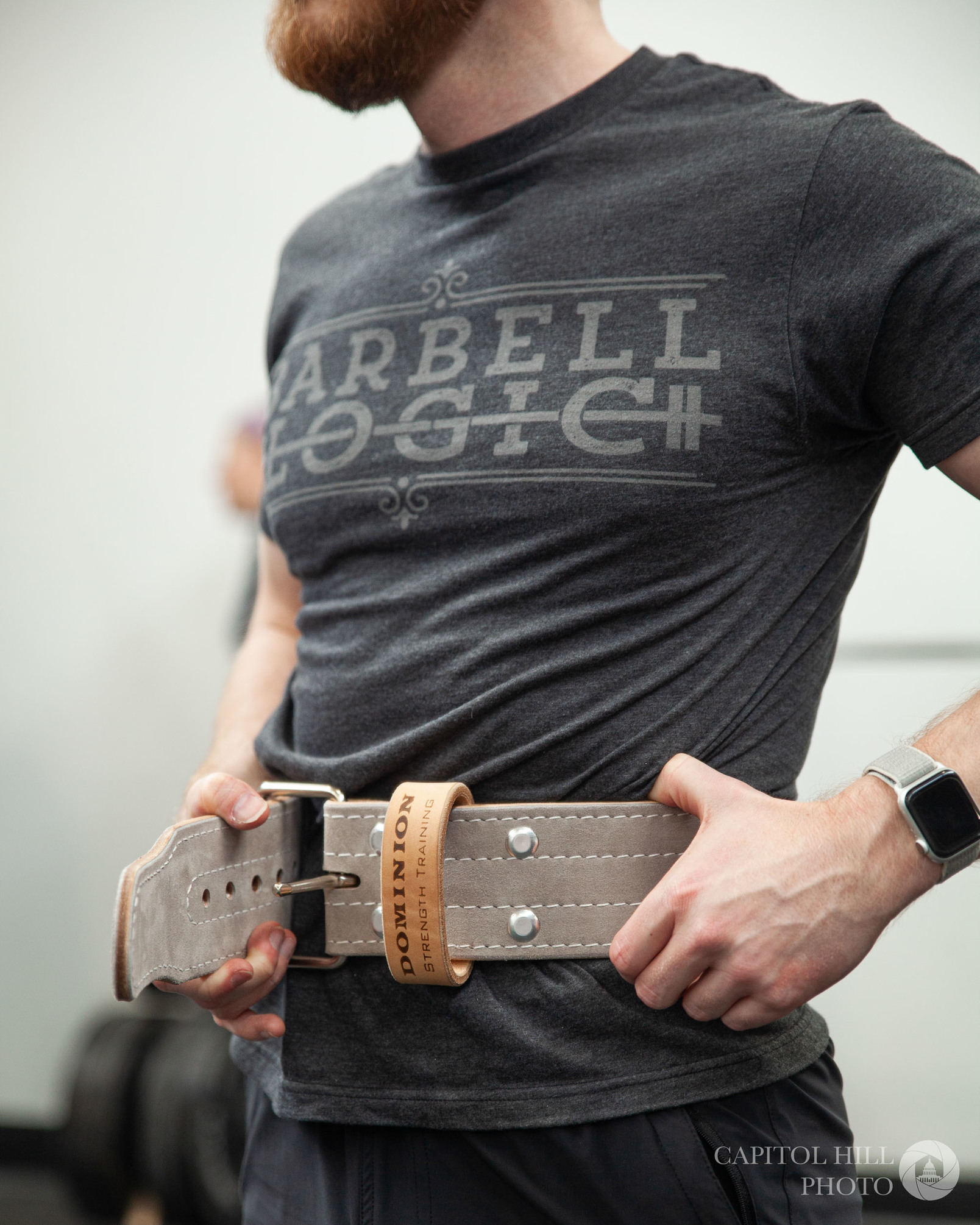 A 3-inch belt is the most universal size as its designed to fit above your hips and below your ribcage. For men of modest height, this will definitely be your choice.

The stock color grey is great because it matches everything, is unisex, highly functional and hides any chalk you get on it over time. 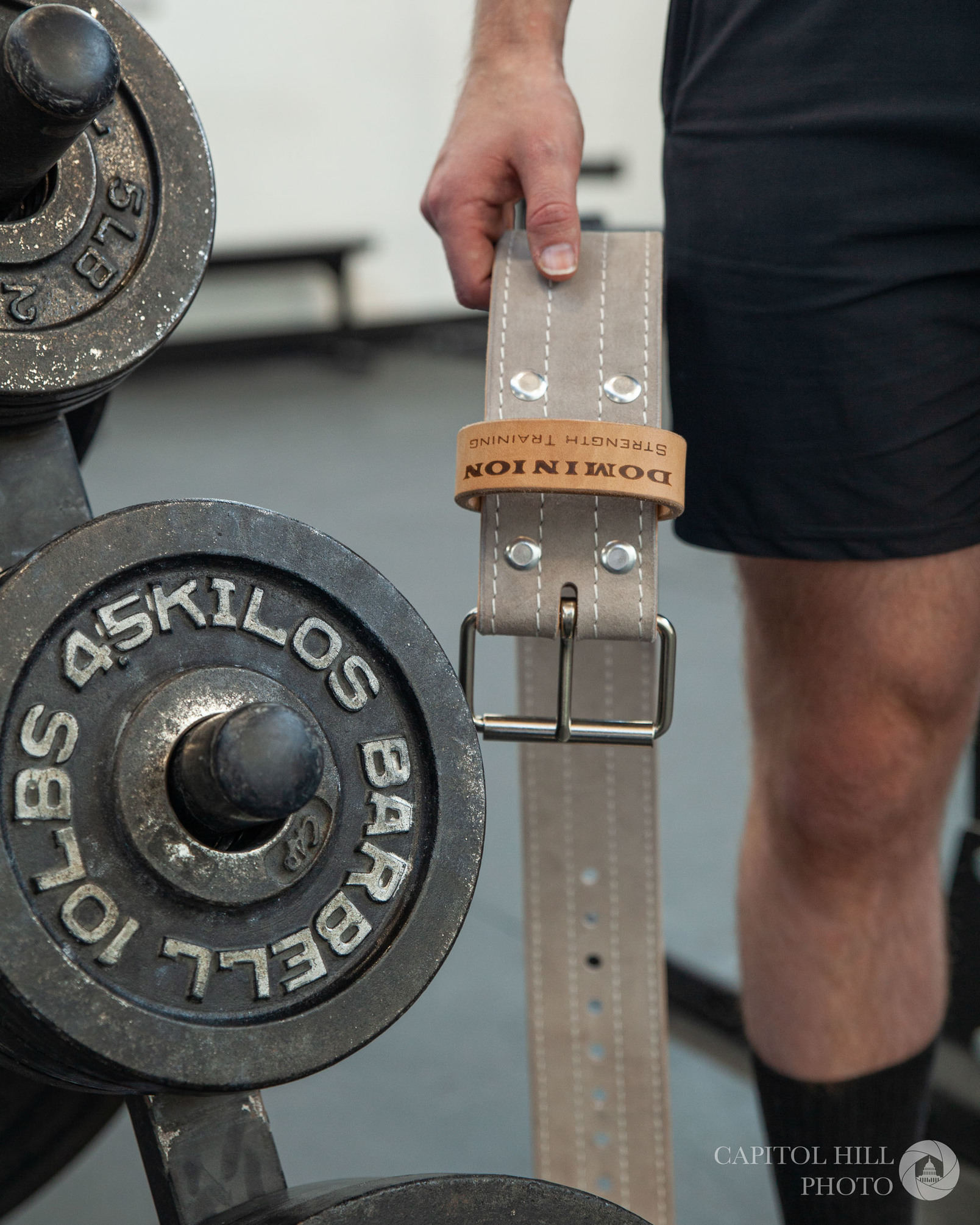 It’s made from high quality top grain cow leather and the hardware is second to none. What makes Dominion Strength different from other belt companies is they produce stock sizes. 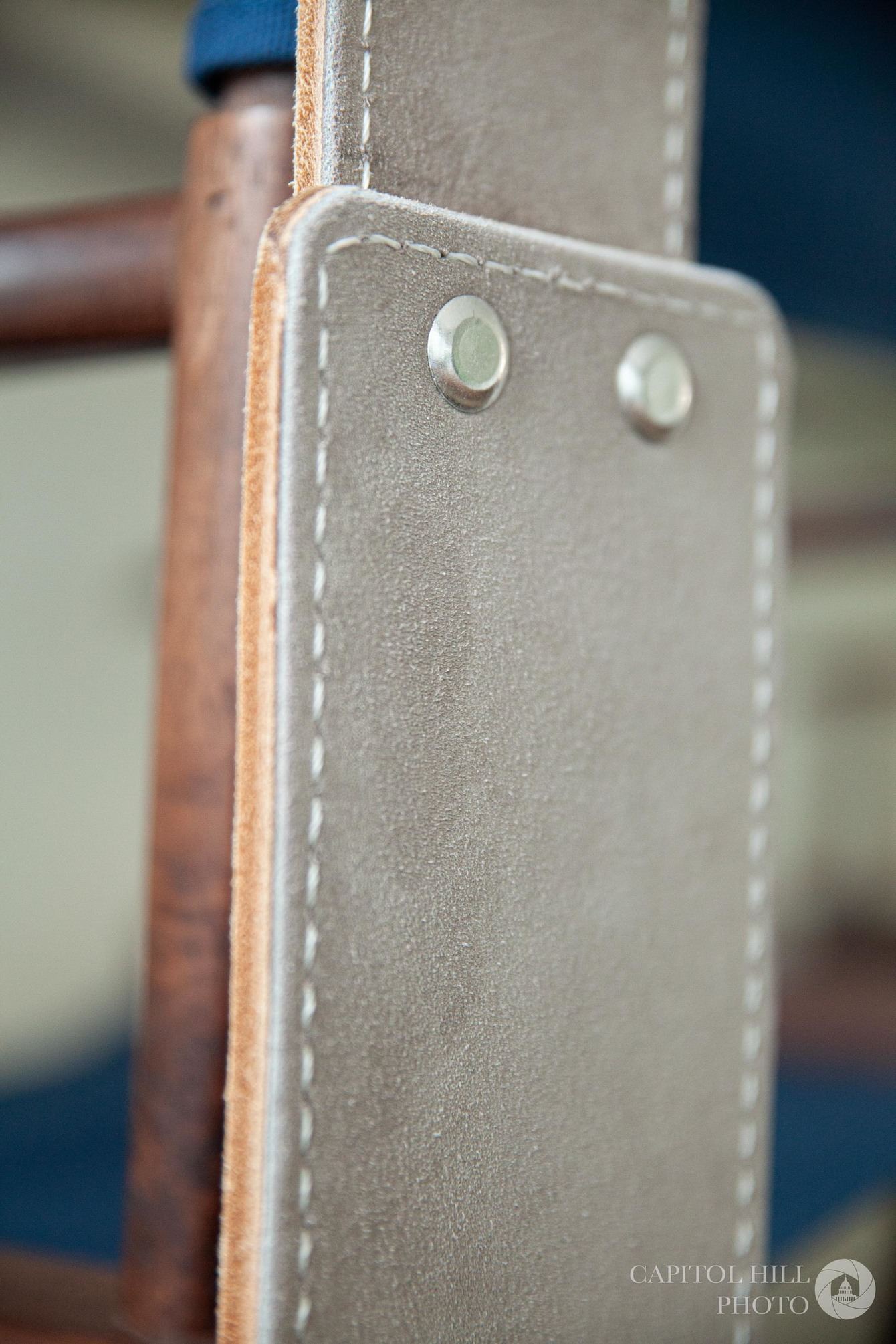 I chose size small which covers a waist between 25-35”. The site says they are able to ship belts in a week but I received one in just a few days. They found a unique need in the market.

Other companies offer customization to varying degrees but expect to wait a minimum of six weeks before receiving your belt. What will you do until then?

Putting It to Work

When I first received the belt, I put it through a break in process. Many suggest rolling up the belt and tying it up for a few days.

I also used a second method which is done by folding over the belt and rolling it through the hands while trying to crush it along the way. 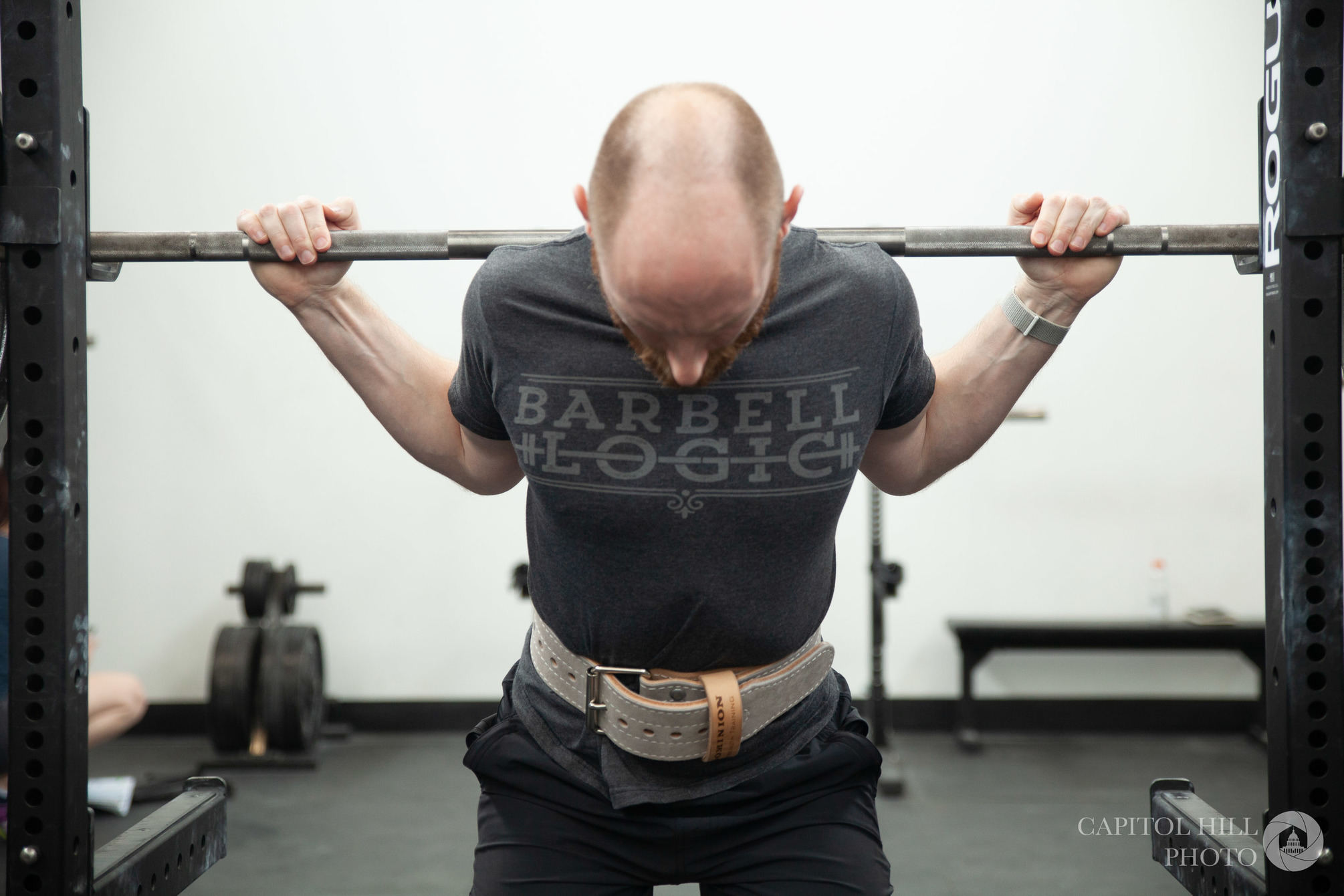 The belt broke in very fast and was comfortable on the first wearing. Many belts are stiff as a board and feel like they are cutting into you. A belt isn’t meant to wear like silk but we can all only tolerate so much discomfort. 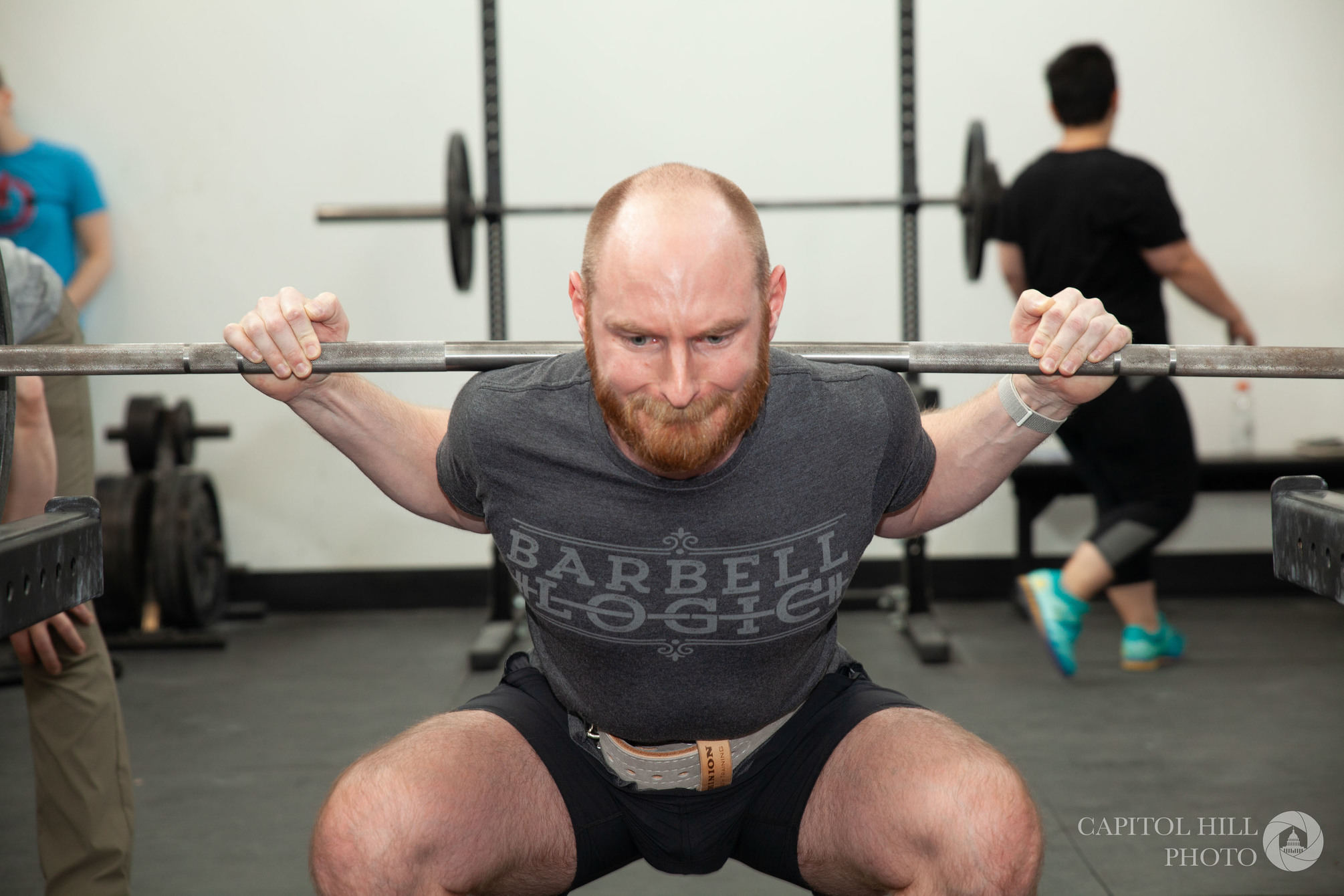 My first use was in this order: squat, deadlift and press. The belt performed like a champ and was easy to take off in-between sets. If you enjoy wearing a belt through the entire workout, it’s not tight enough.

The roller is the best part of the hardware and made levering the belt on and off easy.

After my time at the Fivex3 gym, I have been using the belt for a few months and it only gets better with each wearing. While belts aren’t complicated, they can do wonders for your training when used properly.

After using the single ply belt (above) for a few months, I decided to gift it to my friend who is still actively using it. He also lifts a lot more weight than I do!

There are many differing opinions about how thick a belt should be but a general rule of thumb is a thicker belt is more supportive but usually less comfortable.

This generalization is based upon the fact that thicker leather is stiffer and less likely to bend to the contours of the body making it feel more like armor rather than silk. 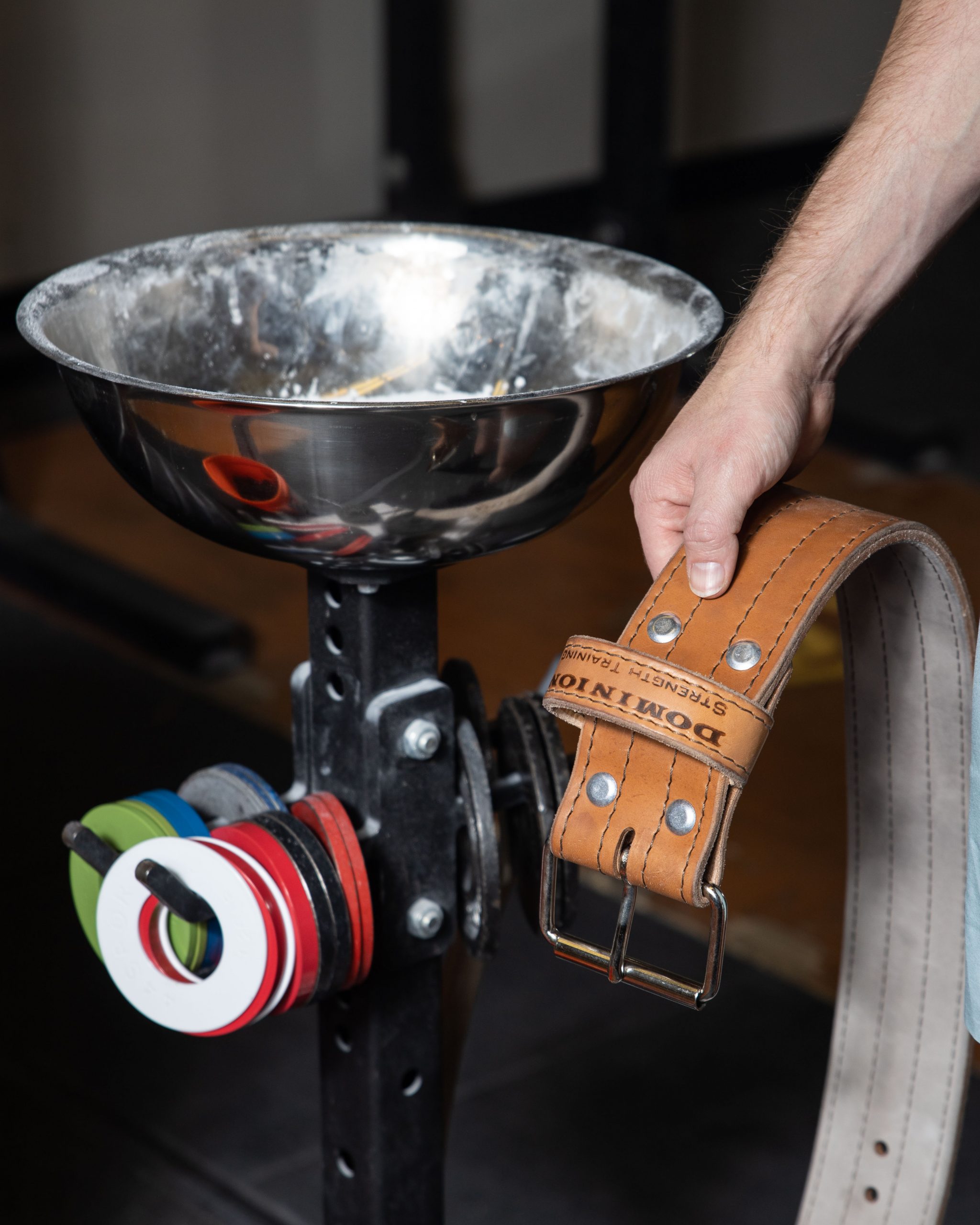 Upon receiving the Dominion double-ply belt, I can say it felt no different than the first when it came to comfort. I broke in the belt by rolling it with my foot on the floor in both directions.

Suede located on the inside of the belt tends to be the preference of the lifter and I like the added grip it provides.

This belt, however, was oiled leather on the outside and aesthetically pleasing. Chalk tends to make grey suede look old and yellowish but good ole fashioned tanned leather never goes out of style here. Then again, we’re going for function, not fashion, right? 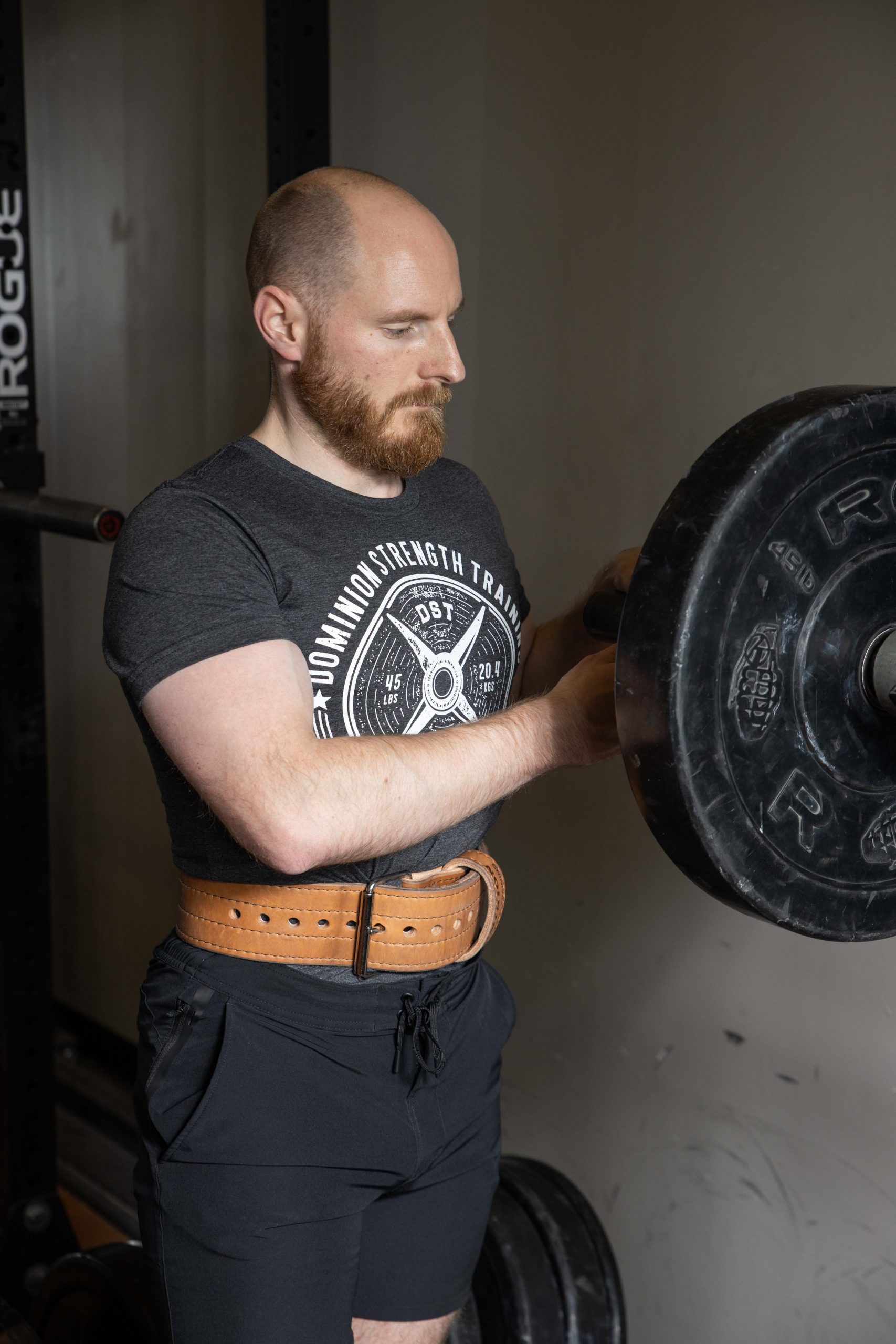 Like before, I chose a 3 inch belt in size Small. At the time of this writing, I’ve been using the belt for a few months and have no intention of switching, unless Dominion comes out with something new.

This belt currently runs $165 which is $50 more than the standard belt, so my thought is, if you are in it for the long haul, how do you define investing in the future, especially when it comes to your health? 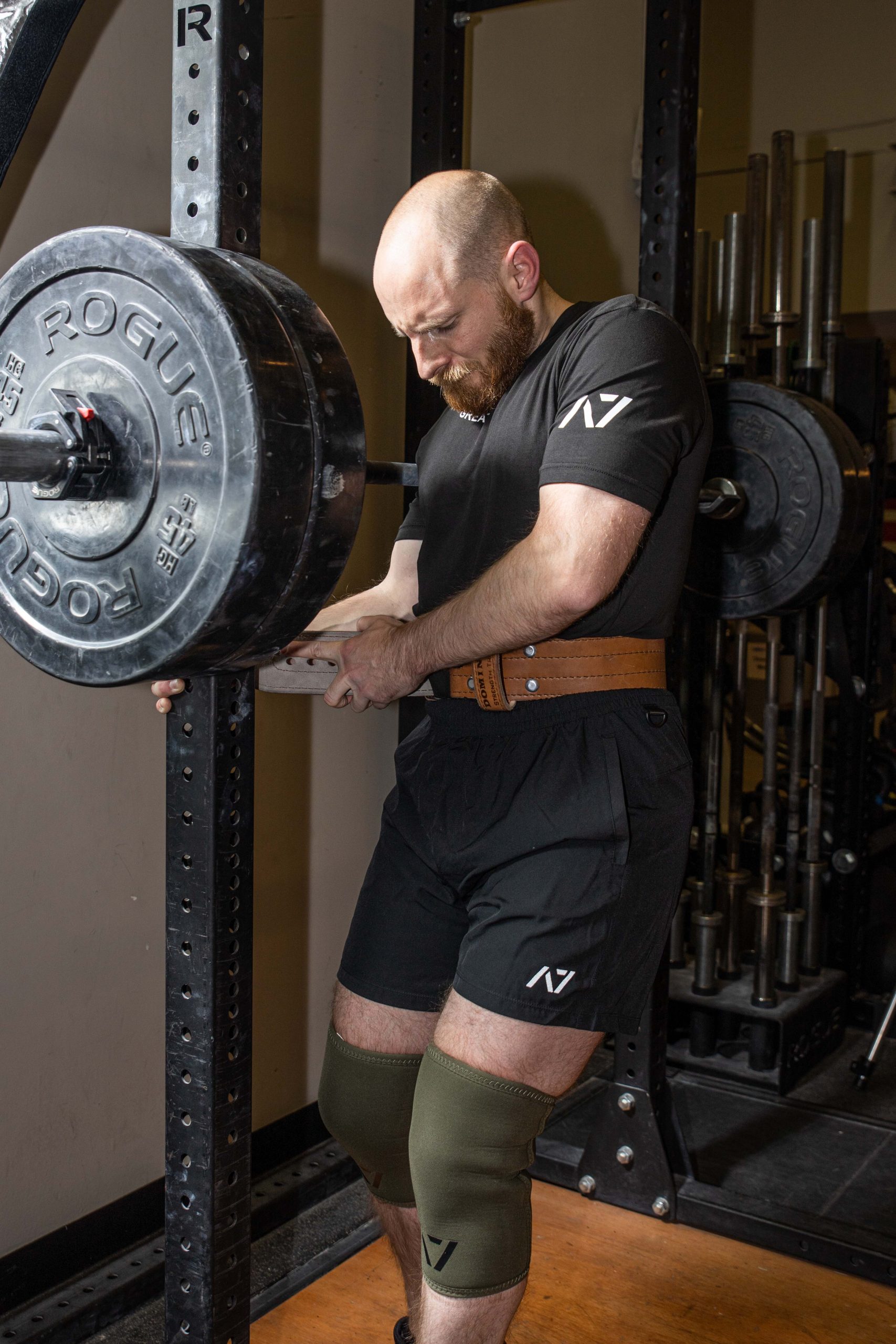 Either way, both belts provide great value for the price.

After learning how to barbell train with the basic lefts such as squats, deadlifts, presses and bench press, you’ll move to accessory lifts and alternate ways to target muscles. 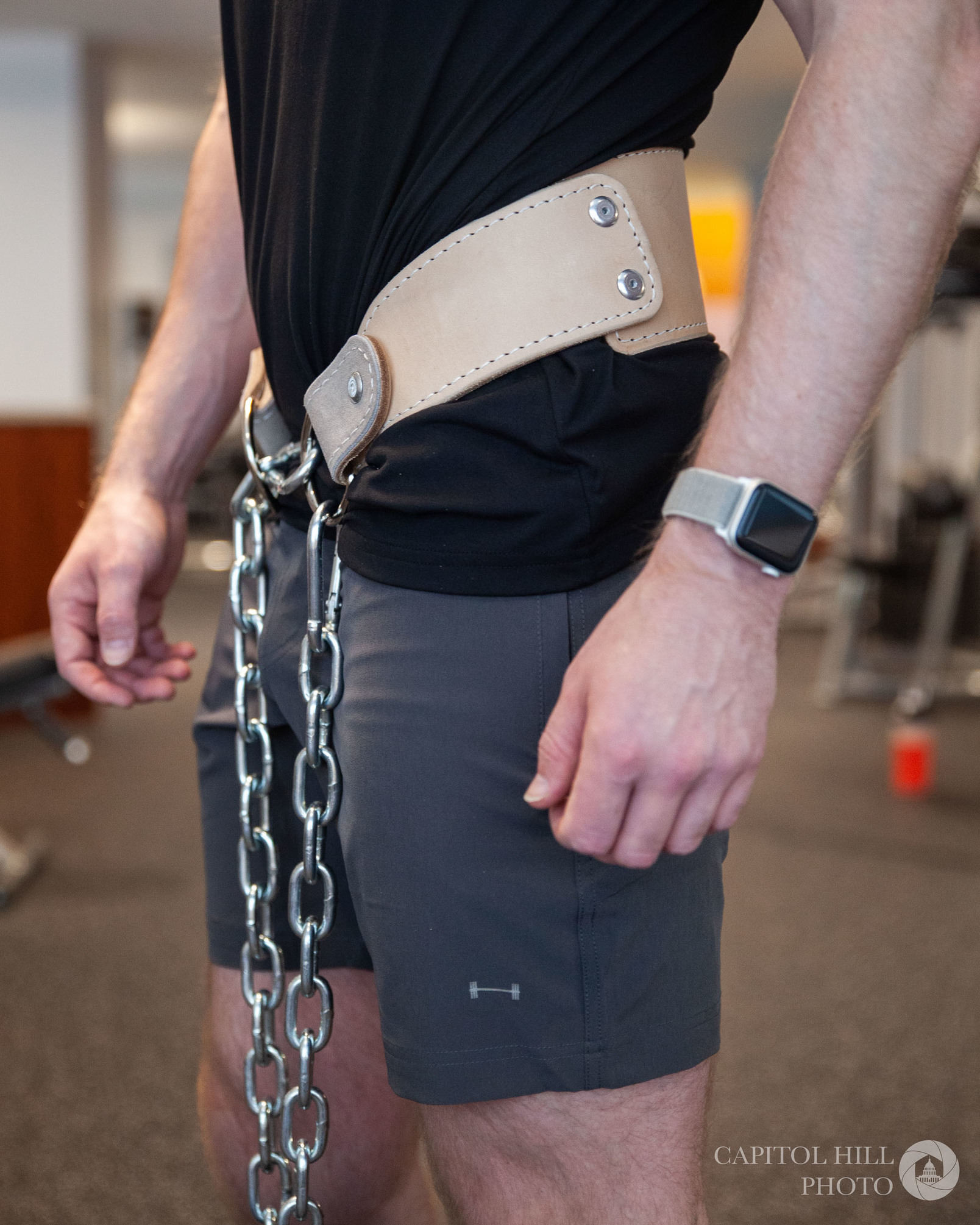 The dip belts primary use in its name, for triceps dips. Now you’ll need a set of bars to dip between and for some people, their shoulders won’t like such a movement.

The dip belt is a great way to harness gravity in a new way without using a barbell. 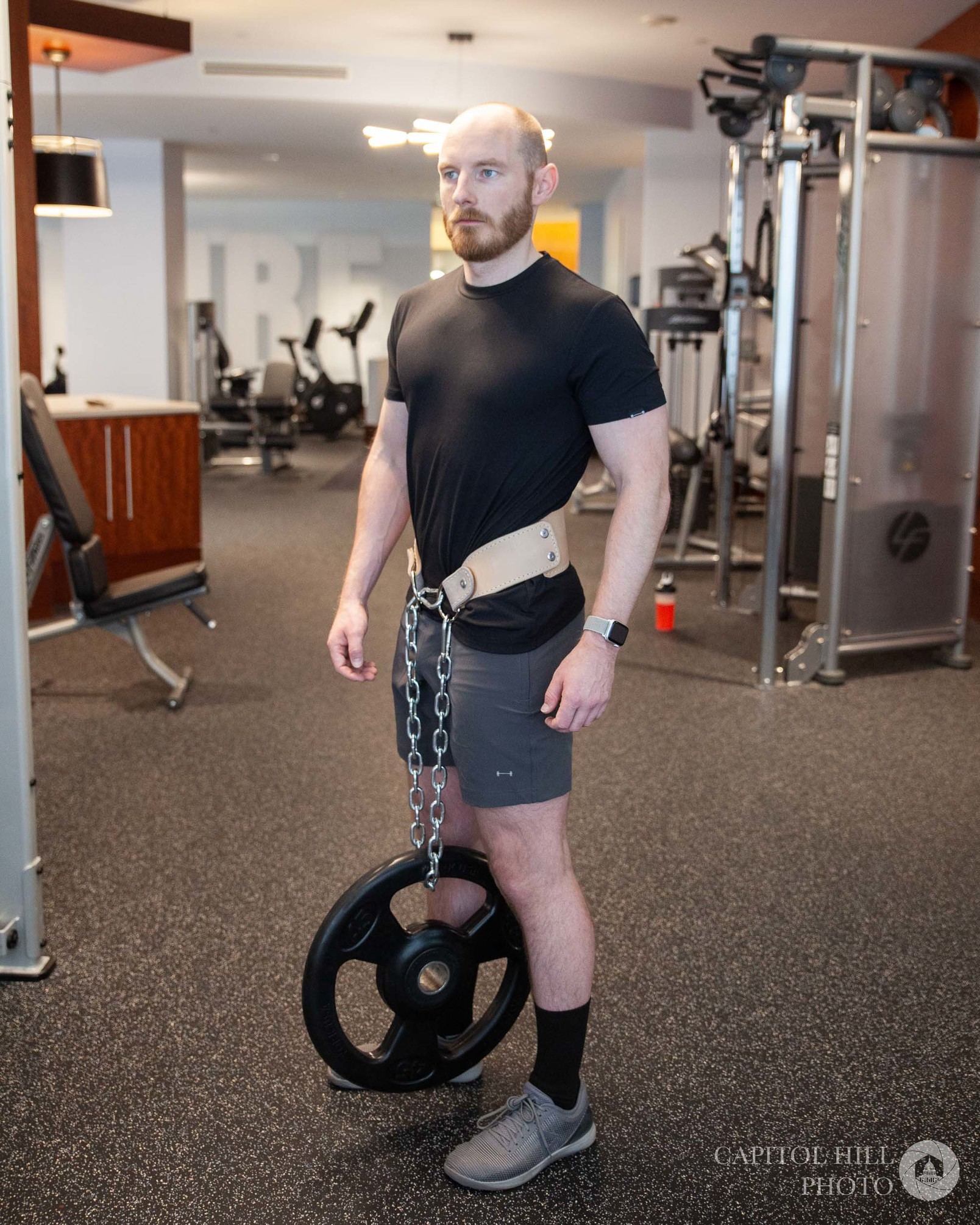 In addition, the dip belt can be used for chin-ups. Usually it takes people a while before there are up to this level. Heck, even the world’s strongest man can only do six.

Somewhere along the way, Blake had extra leather as he was crafting belts. He decided to rivet spare leather strips together to create the Deadlift Jack which is by far the most simplistic yet useful accessory in your gym bag. 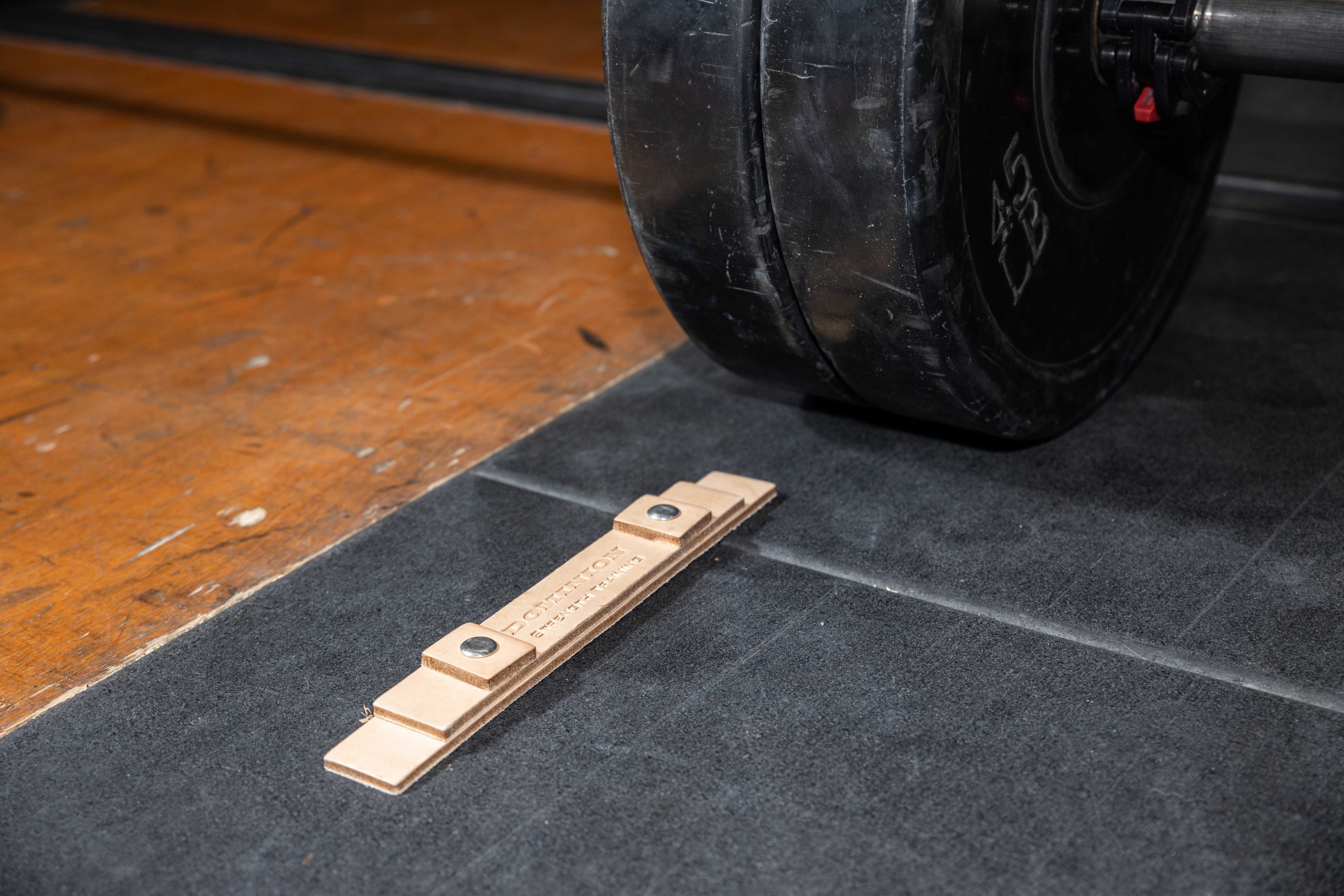 For deadlifting, most gyms have plates that are the same diameter from 10 all the way to 45lbs. As the poundage goes up, it becomes harder to lift one end of the bar to add weights.

For someone like myself that is pulling over 315lbs, that’s three 45s on each side. It takes a lot of awkward movement and energy just to get the bar loaded.

In comes the deadlift jack. With one set of weights on each side, just roll the bar up onto the jack. The riveted squares at the top are perfectly spaced to hold the bar in place that way you can easily add or remove weights.

One use and you’ll wonder how you ever lived without them! 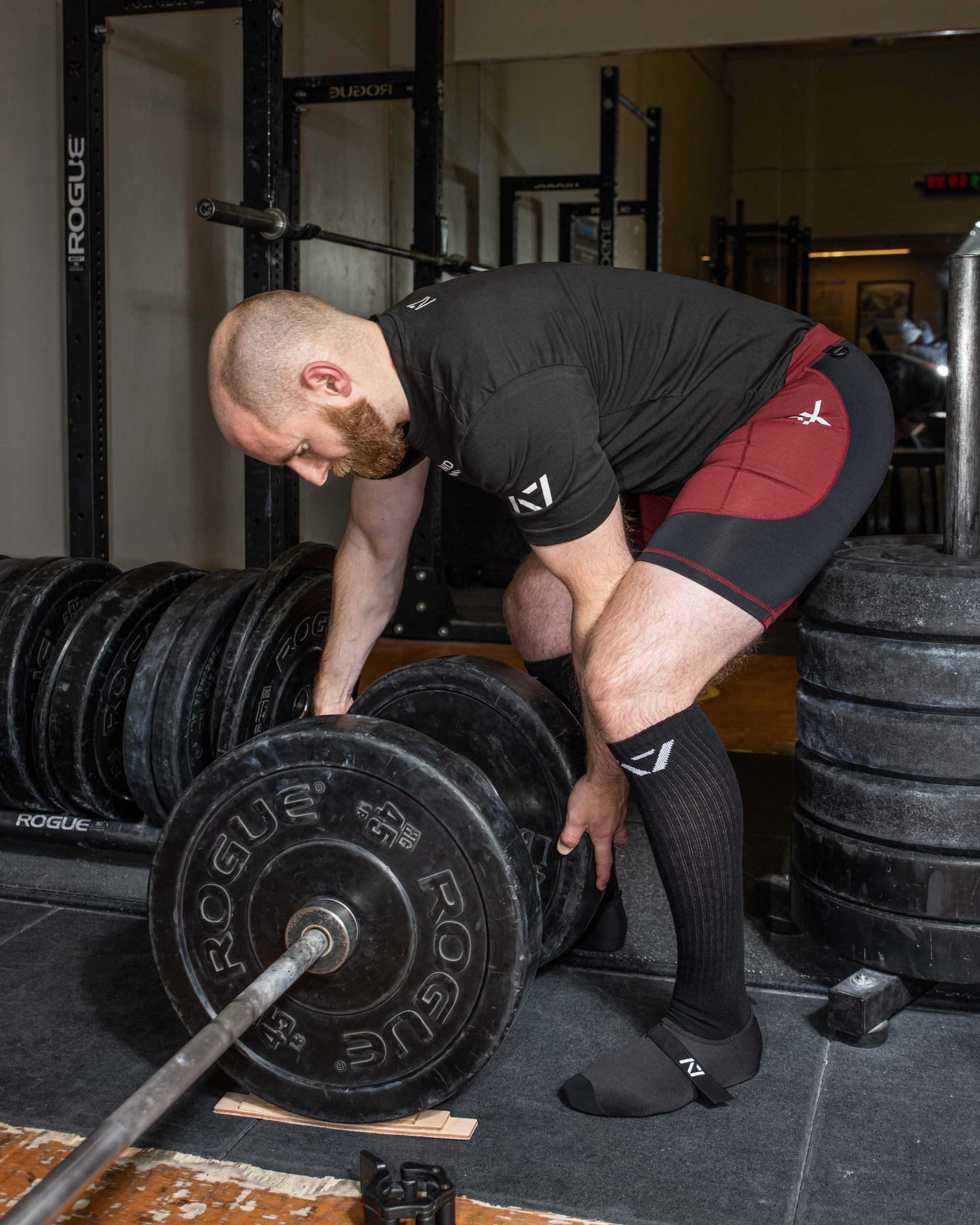 The deadlift is a max exertion exercise which requires every bit of energy you’ve got. Messing around trying to put on plates while bent over can be exhausting.

Considering the Rogue Deadlift Bar Jack is running at $165, the Dominion Deadlift Jack is by far the best $10 you’ll ever spend on barbell related fitness equipment.

Dominion Strength Training is an excellent company ran by a couple that believe in the power of the barbell. Their product is one of the best on the market with speedy delivery and excellent customer service. 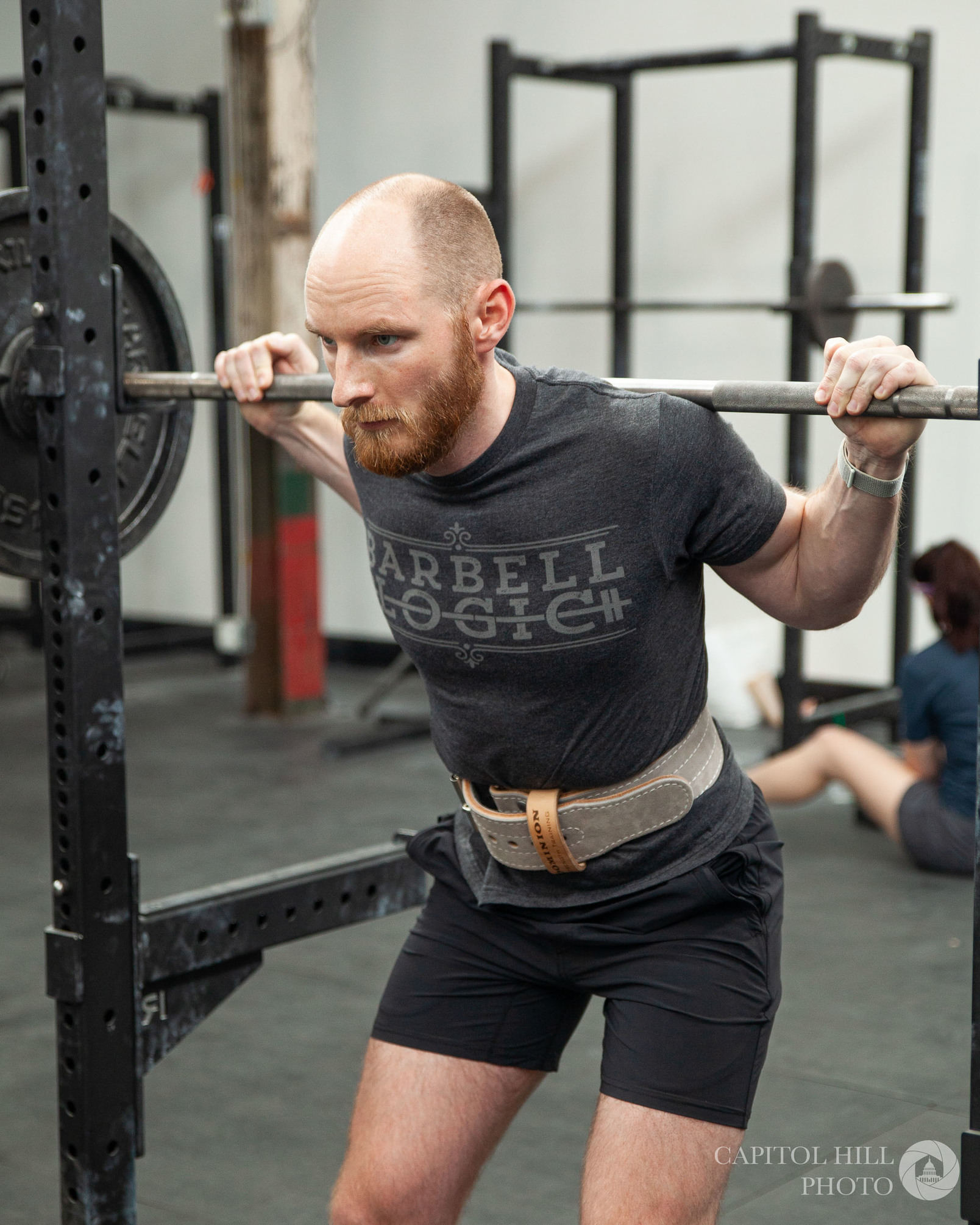 A good belt should last you a lifetime and theirs are guaranteed for just such a timeline. If you are looking to get into fitness training, start with barbells. 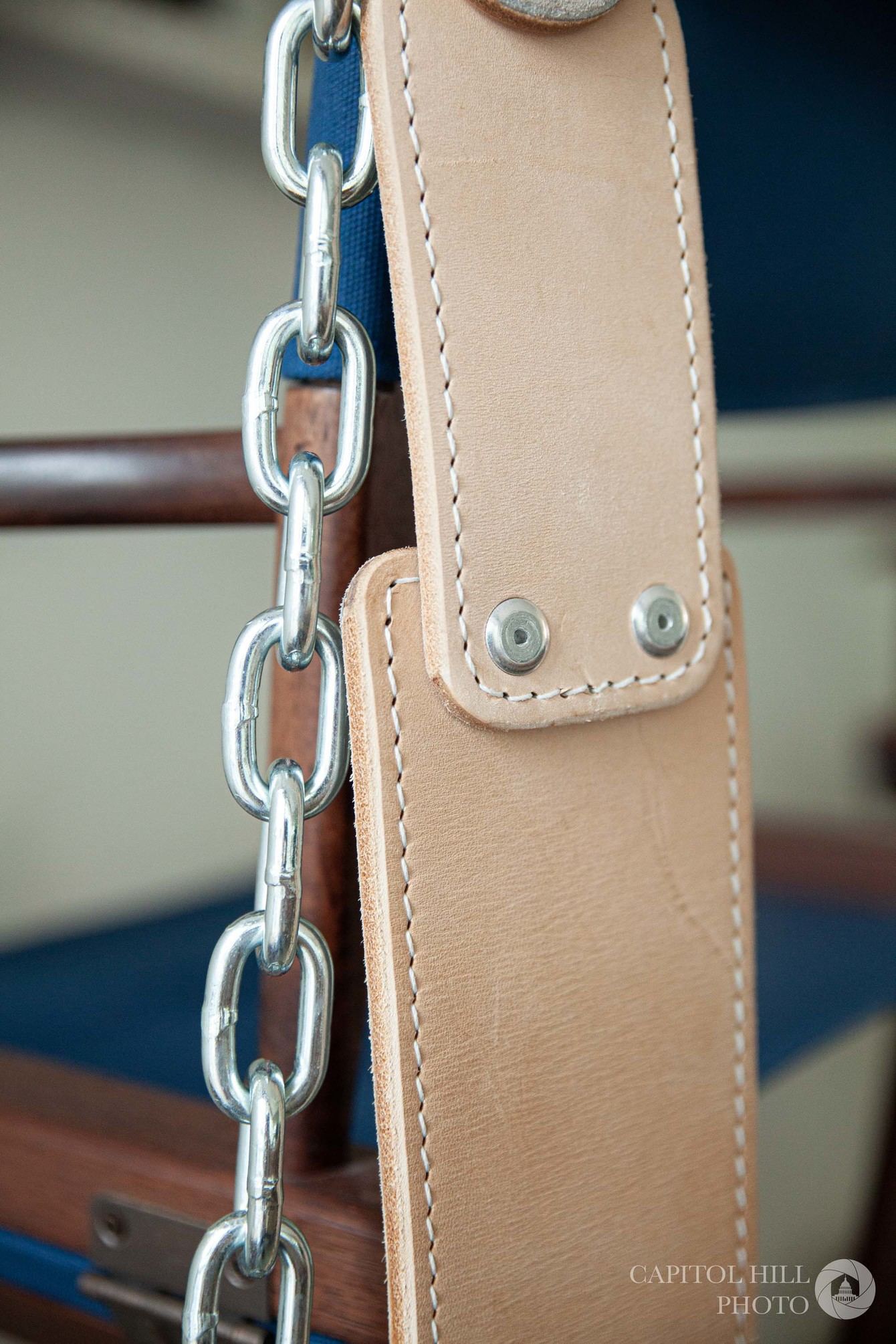 When you do that, shoes and a belt will be your first investment. If you get that far, give this company a look before taking action.

You won’t be disappointed.

For TMM readers, use the code “modest” for $10 off your order.