This is a review of the Hamilton Khaki Field Officer Mechanical watch (after owning it for over three years). 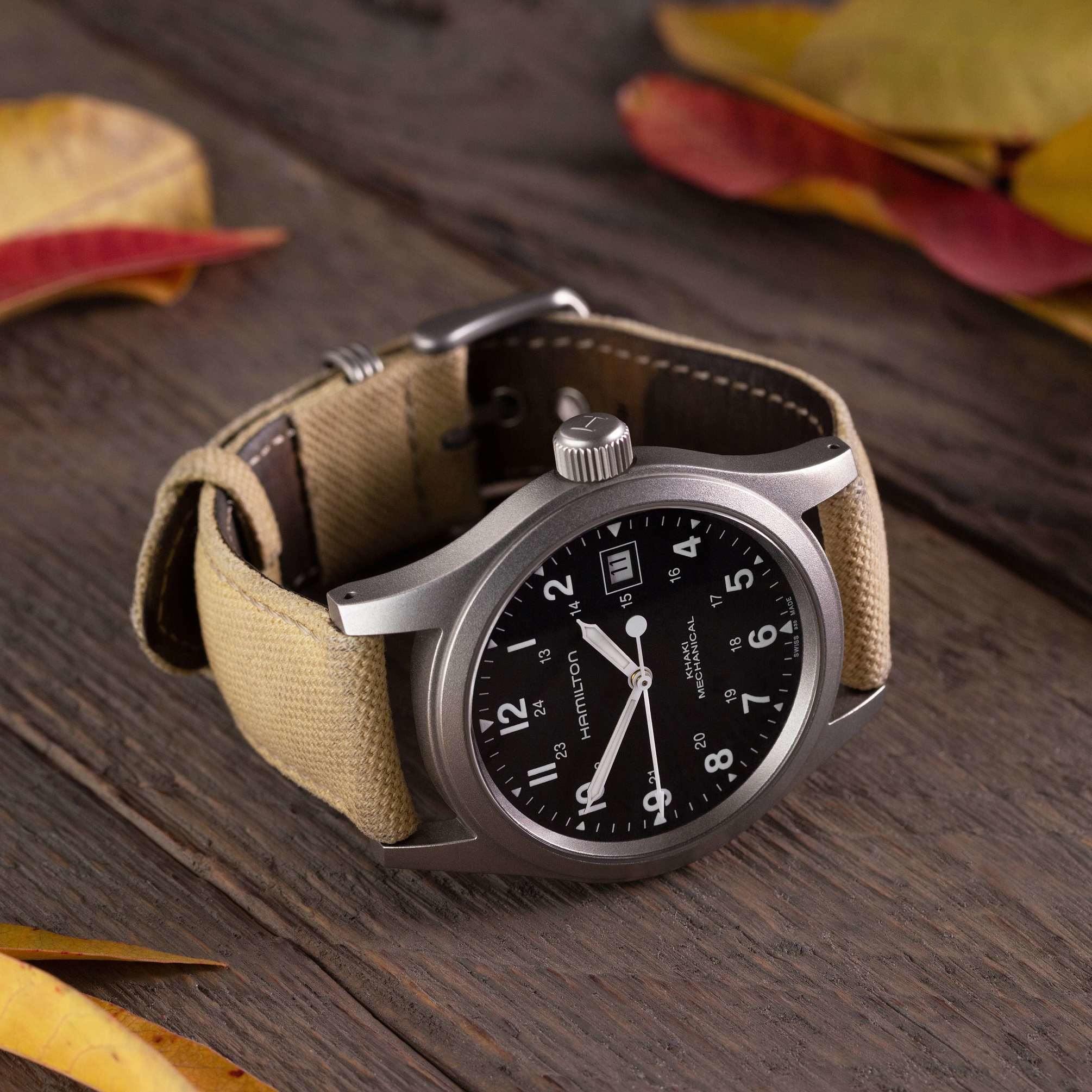 I’ve owned this little Hamilton watch for a little over three years now, and while it doesn’t get a ton of wrist time at the moment, I’ve definitely worn it more than any other watch in my collection.

It’s a great little Swiss made field watch, and I’m excited to share my thoughts about it. If you’re thinking about buying this watch, this review should help.

Since there are other versions of this watch, I’ll just tell you that the reference number is: H69419933

This version has a black dial and comes on a beige canvas strap. It sells for $495 if you buy it directly from Hamilton, but you can usually find it for $300-400 on Amazon and Jomashop.

Let’s look at the specifications for this watch:

We need to look at one spec in particular…

While a 38mm dial is almost universally flattering, we do need to discuss the lug to lug distance on this watch.

The Hamilton Khaki Mechanical has a lug to lug distance of 47mm, which is pretty long for a relatively small watch.

In my opinion, this watch would look better with a slightly shorter lug to lug. This isn’t an issue for most people, but if you have very thin wrists (say, less than 6.25″ inches around), you might experience some lug overhang.

Why I Bought It

I love the simple, casual, functional nature of field watches. They’re easy to read and easy to pair with most casual outfits – especially when you have a neutral dial (black or white).

And I love the size of this particular field watch. It’s 38 mm in diameter and under 10 mm thick, which is perfect for small or average sized wrists.

One reason I chose this hand winding version over its automatic big brother is the thickness. Both watches are 38 mm in diameter, but this simple manually wound movement is very thin.

That means this watch slides neatly under any shirt cuff, almost like a dress watch. In fact, in a pinch, you could absolutely throw this watch on a patent leather strap and wear it with a suit. 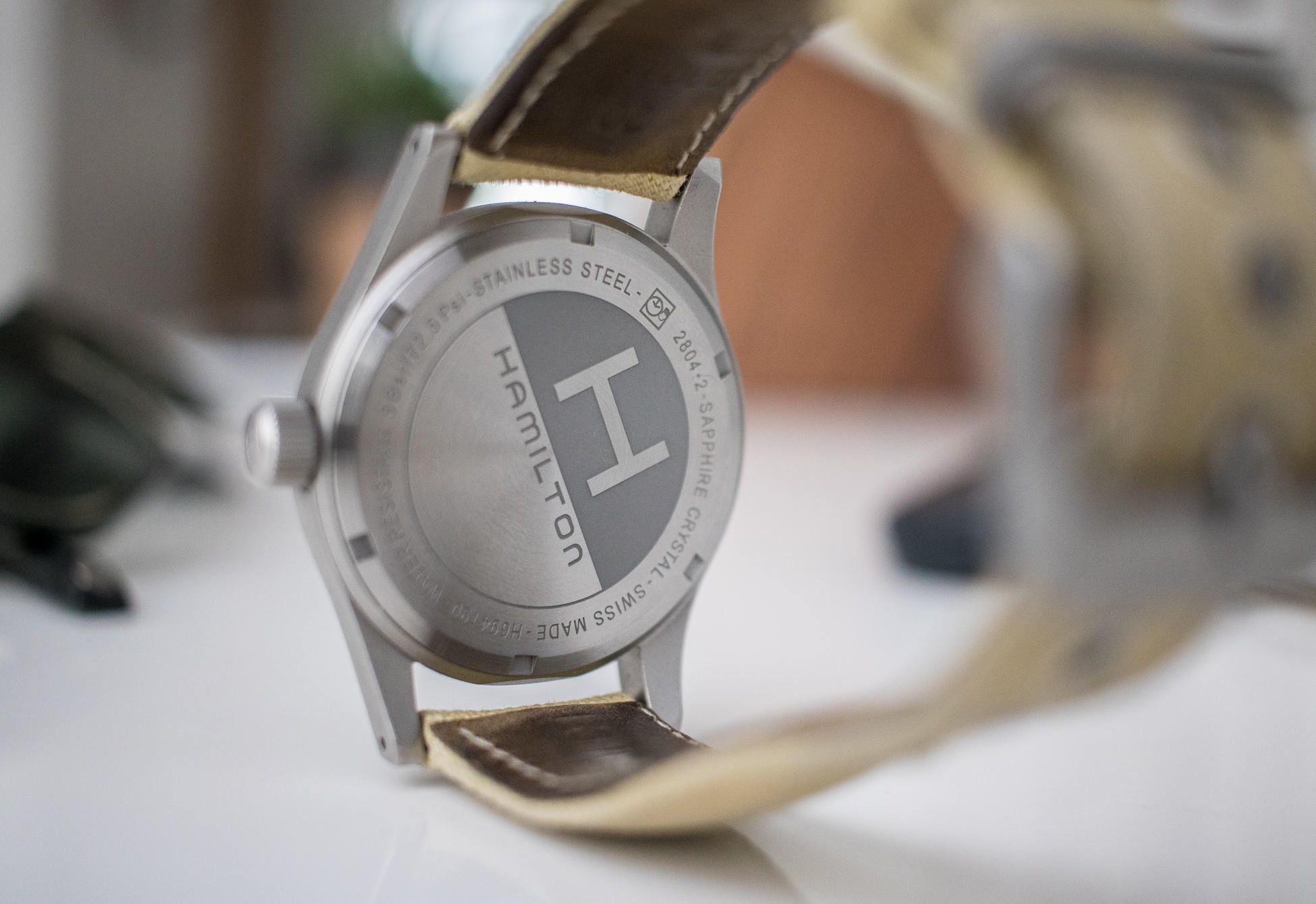 It’s also very light, so it really disappears on your wrist after you wear it for a while. I think this watch offers a ton of value for the price. It’s a Swiss made watch from a company with plenty of heritage.

Hamilton was originally founded in Lancaster, PA, not too far from where I grew up. The company made a name for itself with super accurate pocket watches for the railroad industry.

During WWII, Hamilton provided hundreds of thousands of watches to American soldiers. Their field watches – like this one – are still some of their most popular models.

In the 1970s, Hamilton was bought by the Swatch Group, a giant Swiss watch company that owns brands like Omega, Longines and Tissot.

So they have this American heritage, even though they’re technically Swiss watches. And the fact that you can get this mechanical, Swiss watch for under $300 is ridiculous.

A lot of people complain about the strap that this watch comes on, and I think many people who buy it end up putting it on a leather or NATO strap.

I actually had it on a black perlon strap for a while, but I ended up putting it back on its original canvas strap because it’s so comfortable.

I’m not in love with the color of this strap, but it has broken in very nicely, and it feels great on the wrist.

Of course, you could put it on a leather strap or NATO, and I think black is nice choice (regardless of which type of strap you choose).

In case you can’t tell, I love this watch, but there are some things I don’t like about it.

First and foremost, I wish it was more resistant to water. Technically, this watch is water resistant up to 50 meters, and it’s supposed to be able to withstand brief submersion.

But I’ve heard reports of this watch being damaged during heavy rainfall and light swimming, so I don’t want to risk getting it wet. 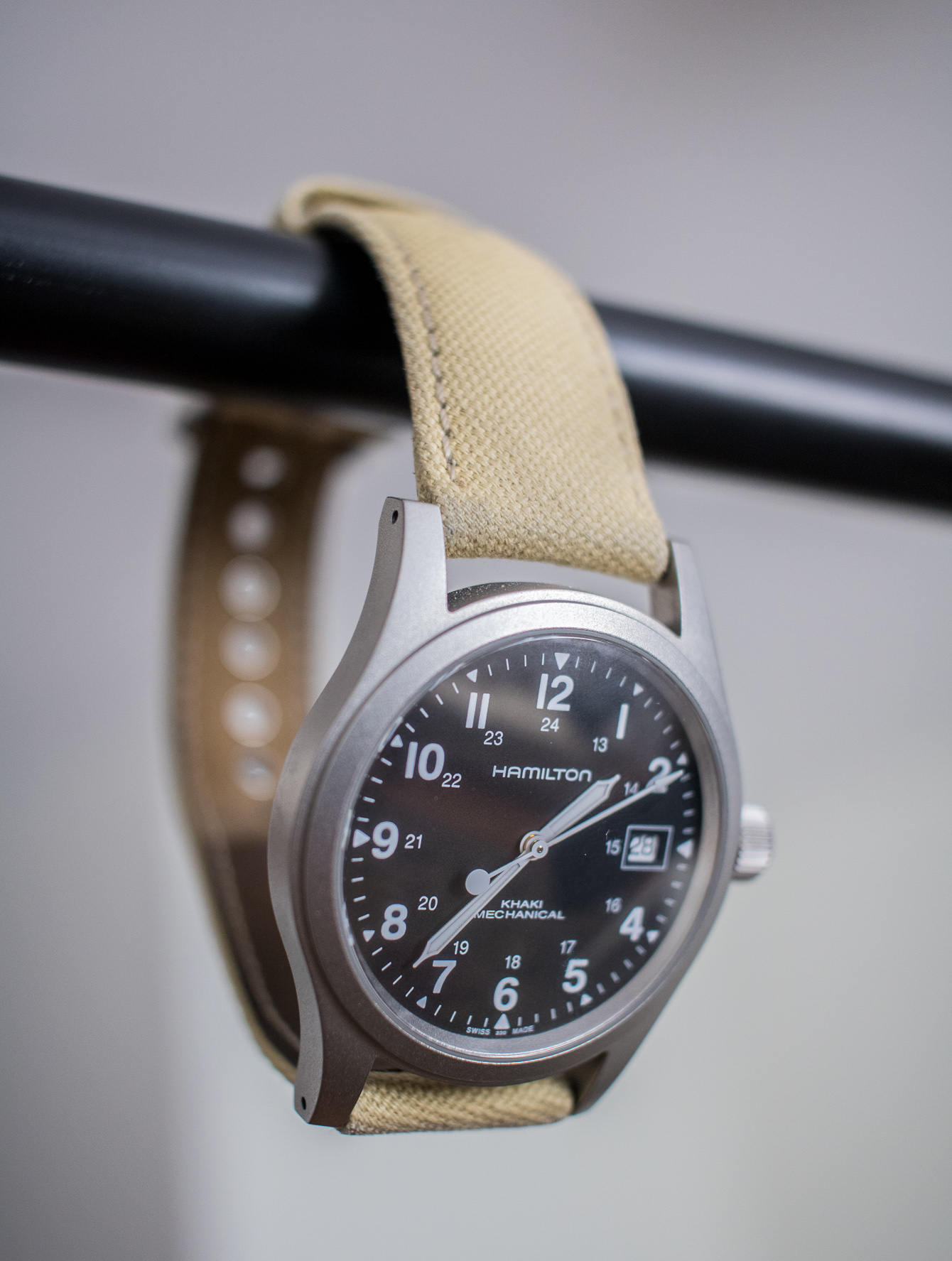 If this watch were more water resistant, it would truly be a great beater – something you could take hiking or to the beach without worry.

The other thing I would change is the size of the crown. The large crown makes winding and setting this watch a breeze, but in my opinion, it looks a little too big for the case.

Compare it to the Seiko SNK809, for example. The SNK has a tiny little crown that almost sits flush with the case when it’s in its default position.

Granted, this makes it harder to manipulate the crown, but it definitely looks better.

Should You Buy It?

If you want a casual, mechanical watch that’s Swiss made and has some heritage, I can’t think of a better option under $300 – especially if you have small or average sized wrists.

And if you’re debating between manual wind and automatic, I really haven’t felt inconvenienced by having to wind this watch each morning. 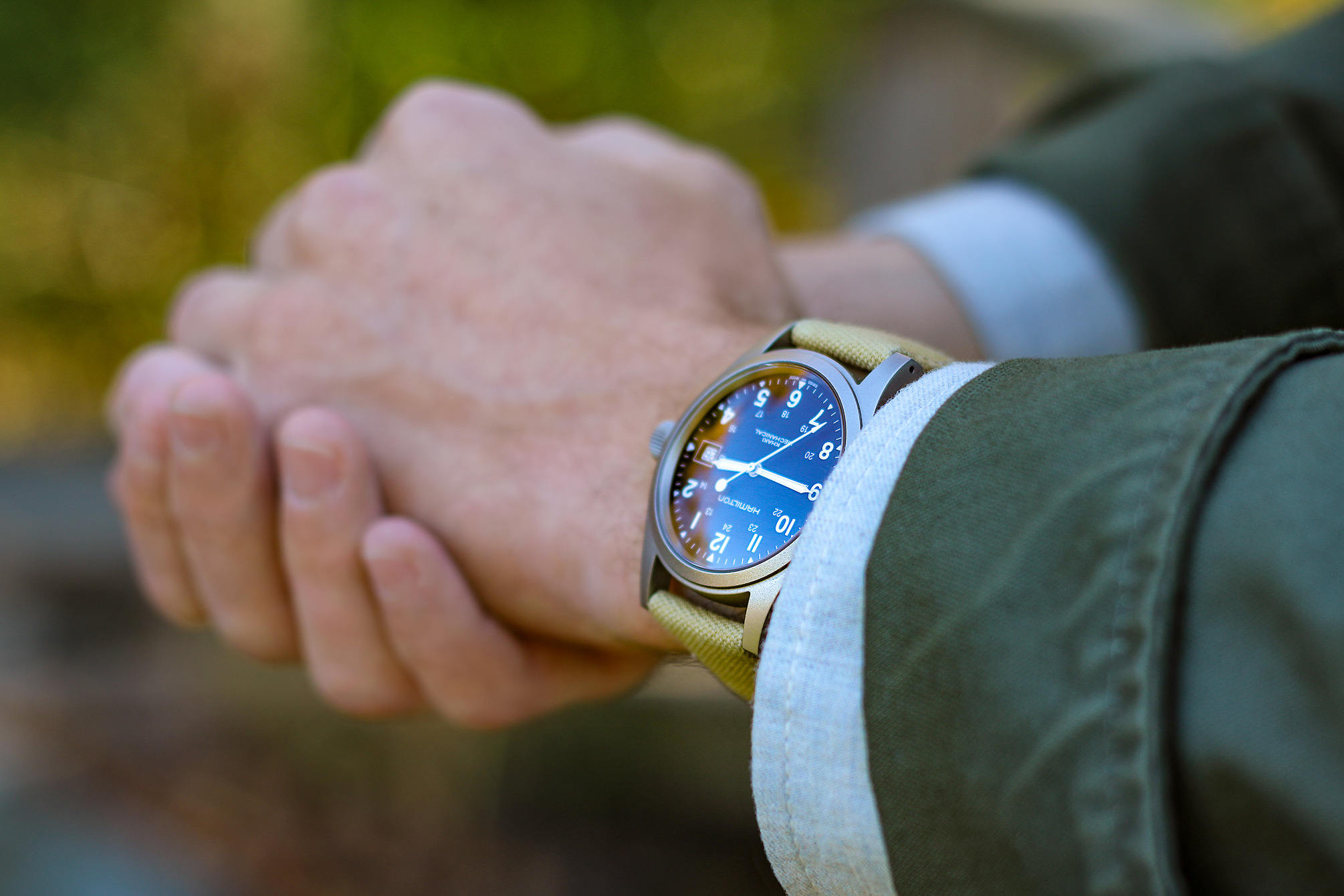 In fact, it’s an enjoyable little ritual. I’ve actually found that this watch doesn’t run out of juice as much as my automatic, non-hand winding watches do (because I’m always winding it up).

After I bought this watch, Hamilton released a new and slightly different version of the Khaki Mechanical: the H69439931.

It’s the same in many ways, but it does look a little different. According to Hamilton’s website:

The new Khaki Field Mechanical is a faithful recreation of its original 1960s forebear and is true to Hamilton’s military heritage.

It’s a great choice for anyone who doesn’t want or need the date complication, or if you happen to prefer the leather-trimmed stock strap.

I think they’re both really cool, but I do like having the date window, so I won’t be swapping my H69419933 for the newer release.

You really can’t go wrong with either version of the Hamilton Khaki Mechanical, so just go with your gut!