Hamilton is an iconic American Watch Brand with a rich history. 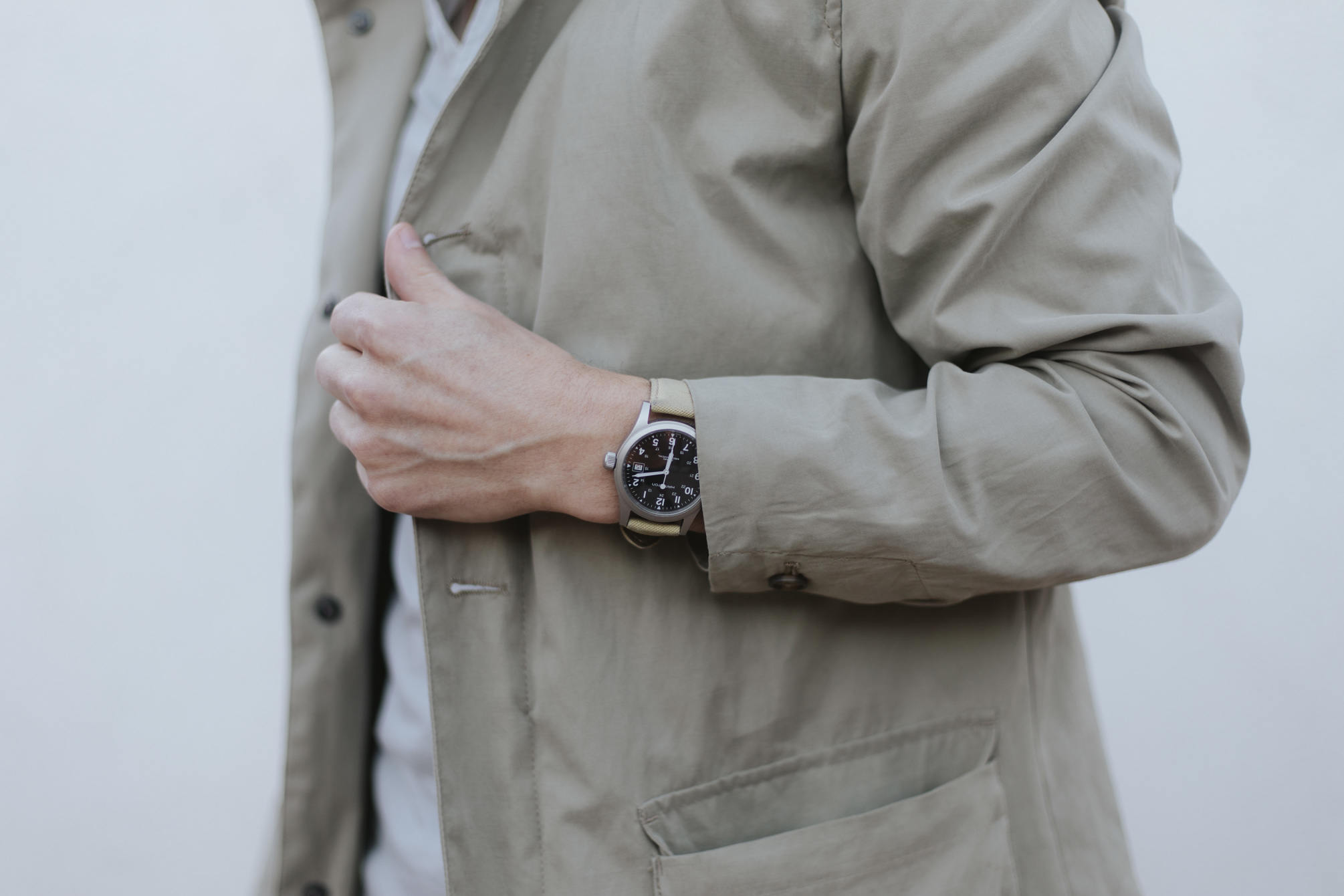 They are highly-respected in the watch community and one of the most affordable brands with popular offerings in every price class.

Hamilton continues to refine its selection by adding a variety of popular retro models. And nearly all of Hamilton’s styles are perfect for everyday wear and almost any occasion.

Short on time? Here are our top two picks for the best Hamilton watches you can buy right now: The Hamilton Khaki Field Mechanical is one of the most famous field watches of all time and definitely one of the top Hamilton watches.

The BelowZero is a 46mm military-inspired dive watch with 1,000m of water resistance and a super durable sapphire crystal. It also features a helium release valve for those who actually use it for diving.

Hamilton continued producing tool watches through the turn of the century. During World War I, they were one of the main watch and clock suppliers for the U.S. Military.

The success of these endeavors led Hamilton to transition to aviation watches and chronometers for the Navy. As a result, Hamilton was able to refine both their accuracy and design notes. In fact, you can see a lot of industrial and military styles in all their watches.

Hamilton gained more national attention in the 1950s with the launch of the Ventura. The Ventura was the world’s first battery-powered watch, revolutionizing the industry.

The watch and its military design caught the eye of many, including Elvis Presley who wore it in the film Blue Hawaii, foreshadowing Hamilton’s aggressive entry into Hollywood.

From there, Hamilton continued to refine its technology, introducing automatic movements and one of the world’s first digital watches. This included the ultra-futuristic Pulsar.

Hamilton went on to join the Swatch group in 1969 and continues to focus on innovative tool watch designs today.

What Makes Hamilton Watches So Good?

Despite being a part of the Swiss watch group, Hamilton is an iconic American watch that stays true to its rich industrial heritage.

Hamilton makes functional, timeless watches that are both stylish and accurate. They also make some of the best adventure watches on the market for those looking for a multi-faceted timepiece.

Hamilton is one of the better-marketed brands for watches, punching well above its weight class. Hamilton watches are easily recognized in films such as Men in Black, Pearl Harbor, and Interstellar.

In every film, the main character can be seen sporting a Hamilton timepiece. This relationship has heightened the brand’s status and made it a cultural icon all across the watch community.

Here are the five best Hamilton watches, in our humble opinion…

Genuine field watches are extremely rare. The Hamilton Khaki Field is among the best available. The Hamilton Khaki is a 38mm military-inspired watch that stays true to its roots. It features a black watch face with large, legible markers including a 24-hour time indicator.

The Hamilton Khaki comes in a variety of watch faces, but the black dial with the luminous hands gives it a truly vintage feel. Also, the watch features a green NATO strap that fits the classic military vibe perfectly.

More importantly, it’s one of the most famous field watches of all time and definitely one of the top Hamilton watches. It is extremely affordable at roughly $329.

Pilot’s watches are extremely popular for two key reasons. Firstly, they tap into our sense of exploration and travel. Secondly, they are extremely functional. Well-made pilot’s watches usually offer several complications that make it a perfect travel companion.

The Hamilton Khaki Aviation Pilot’s watch is a great example of a well-executed pilot’s watch, stainless steel, 45mm, with a sapphire crystal. The watch also offers an automatic movement and is water-resistant to 200m.

However, the watch’s true appeal is the large, legible face. Pilot’s watches require quick referencing and even some low-level guidance when needed. The Hamilton Khaki Aviation features the traditional pilot’s markers with the hours on the inner area.

It also features a day-date complication at the 3 o’clock position as well. For these features, the $687 price tag is extremely reasonable.

Watch brands are rarely able to claim a signature design element in watches. From cyclops windows on Rolexes to helium release valves on Omegas, certain elements scream a certain brand.

The Hamilton Khaki King II features one of Hamilton’s signature design elements, the day window at the 12 o’clock position.

The day window displays the full day of the week with a smaller date window beneath it. It is well proportioned on a smooth black watch face with Hamilton’s classic 24-hour markings.

The Khaki King II is a compact 40mm military-inspired watch. It features Hamilton’s H-40 automatic movement and an impressive power reserve of 80 hours. It also has a unique display case back which allows the wearer to see the quality of Hamilton’s movement.

The watch is very affordable at around $380.

Hyper-functional tactical watches can be somewhat commonplace. Many brands such as Casio already offer some of the most popular options on the market. However, Hamilton made a major splash with the BelowZero.

Originally released in 2008 as an answer to both G-Shock and deep-sea dive watches, the BelowZero is a 46mm military-inspired dive watch with 1,000m of water resistance and a super durable sapphire crystal. It also features a helium release valve for those who actually use it for diving.

The BelowZero features a rubber strap with a PVD coated screw-in case back. The watch is extremely durable with a sapphire crystal and Hamilton’s automatic movement with 46 hours of power reserve.

This watch is the most expensive Hamilton at roughly $1600 but can be found cheaper on the secondary market.

The Pulsar is one of the most legendary watches from Hamilton. It was featured in the James Bond film Live and Let Die giving it immediate cult status and cool factor. When originally launched, it became a cultural icon and this version is no exception.

The Pulsar is a 40mm digital watch in a stainless-steel case. It features a singular digital display in a clean, minimalist package.

The watch is also offered in a stylish bracelet and comes with 100m of water resistance. While there are other options, this is probably the best Hamilton watch under $1,000.

Hamilton is a well-respected watch brand with an amazing history. Their adventure watches, particularly the Field Mechanical, are some of the most popular in the industry.

Hamilton also offers watches that are immensely recognizable due to their aggressive marketing. Hamilton is a great choice for nearly every watch collector or even those just starting their hobby.

The Modest Man staff writers are experts in men's lifestyle who love teaching guys how to live their best lives.

If an article is published under TMM Staff, that means multiple writers worked on it. For example, sometimes several of us have experience with a certain brand, so we collaborate to publish a more thorough review.

Or, if an article was originally written by one person, but then it was updated by someone else, we'll re-publish it under TMM Staff.

Remember: all of our articles (including those below) are written by real people with decades of combined experience in men's fashion and lifestyle topics.