Fall and winter will be here before you know it. Here are some of the best winter fragrances you can buy.

Those freezing temperatures are just around the corner, and in the blink of an eye you will find yourself digging out cashmere sweaters, shivering in your overcoats and draping those scarves elegantly round your neck.

It is time to think about the next most important element of your wardrobe – namely, your fragrance. The light, fresh, breezy scents of summer will no longer cut it, unfortunately. They should now be relegated to the back of your bathroom cabinet.

Consider them a thing of seasons past! Summer scents are just too skimpy to make an impact when it is 20 degrees outside.

You need a bold and in-your-face fragrance, not a fleeting, maybe whisper of a scent.

It is time to take charge and to seek out those musky, deeper notes of oud, amber, cedarwood, vanilla or sandalwood in a fragrance designed to go the distance.

Winter is an excuse for stronger, sexier scents; longer-lasting colognes with full-bodied base notes and hints of exotic, faraway places in their composition.

Luckily, there are plenty of options on the market.

Here is our top recommended list of the best fall and winter colognes. If possible, try to test them on your skin before buying, as fragrance is largely dependent on your particular pH balance and body chemistry.

A quick note here: you will soon notice how many fragrances these days contain oud. It has become one of the most popular raw fragrance additives in the world, and the darling of designers around the world.

So, what exactly is oud?

Oud is one of the most expensive perfume ingredients in the world; it is said to be 1.5 times the value of gold.

The finest oud oil can retail for $50,000 per kilo. Oud has an intoxicating, animalistic, sweet, musky, woodsy scent and it has been used for centuries in India in religious ceremonies.

It comes from the tropical Agar tree, also called the Aquilaria, and it is formed when the tree is invaded by a type of parasitic mold called Phialophora parasitica, causing a dark, sweet resin to form.

Yes, oud is a parasitic mold, strangely enough, but do not let that put you off.

Aquilaria trees are not only endangered, but the resin only forms in about 2% of the trees, hence the soaring price of oud for use fragrances on the world market.

Short on time? Here are our top three picks for the best winter colognes you can buy right now: The Viktor & Rolf Spicebomb Extreme bottle looks like a hand grenade – and it will give you a knock-your-socks-off-in-a-good-way blast of spicy, oriental-y fragrance that is both long-lasting and distinctive. 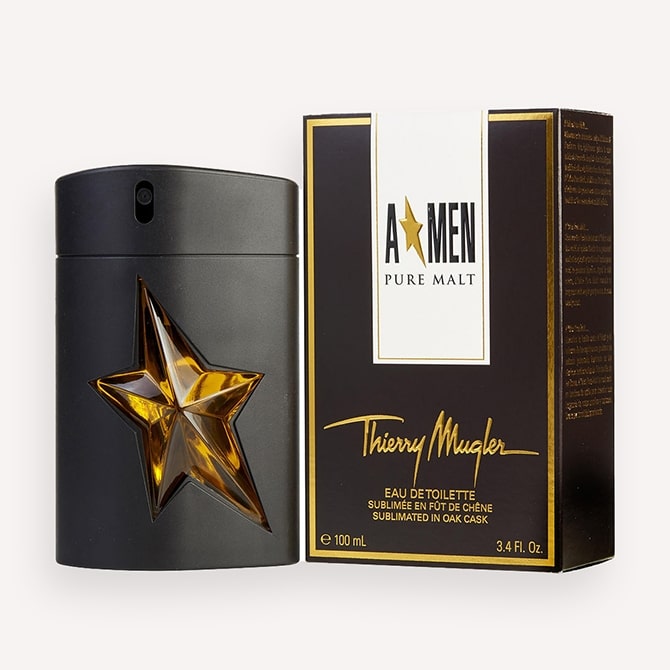 The reference in its name to malt whiskey should give you a hint as to the intended market for this fragrance. It's for a mature, sophisticated man with refined tastes. Tobacco Vanille is rich, addictive and potent, like a great cigar.

The Best Men’s Colognes for Winter 2020

Here they are, in no particular order…

Tom Ford is a big fan of oud. And why not? If sheer luxury had a smell, it would be Tom Ford Oud Wood and the newest iteration of his Oud Wood phenomenon, Intense Eau de Parfum.

This is a fragrance powerful enough to announce your presence, but one which will only scare off those who are not cool enough to understand. Loud, perhaps. Persistent, certainly.

It takes the original Oud Wood up a notch – and then some. Tom Ford himself describes it as “Unrestrained. Lavish. Intense.”

Oud Wood Intense starts out with a hit of spice, then fades into essence of oud with the kind of smoky intensity of burning wood, angelica, cypress, ginger and castoreum.

With leathery undertones and faint hints of juniper, Oud Wood Intense is for a bold, masculine man who needs to be seen and appreciated for his great taste – and it is perfect, of course, for winter wear.

It opens with top notes of leather and myrtle combined with heart notes of saffron and oud and finishes with deep base notes of cedar wood and sandalwood.

Noir Absolu Oud Essence is a rich, woody fragrance, yet with some powdery elements and softly spiced floral notes in a distinctly oriental aroma.

Masculine and highly seductive, the sleek black bottle pimped out with rockstuds and gold accents completes its unabashed virile image. It is all male – and then some.

Be prepared to have women you don’t even know stop and ask what fragrance you are wearing. Not a bad thing, right? Acqua di Gio Absolu is the new iteration of the original Armani fragrance, and it was launched in 2018.

If you can imagine hints of marine and woody tobacco, blended with grapefruit, patchouli and amber you will have it. It is earthy, it’s sensual, it’s sophisticated and it’s totally masculine. Women seem to love it – and it won’t break the bank either.

Enjoyed and often worn by both men and women, Creed Royal Oud is in the woody, spicy aroma category. It is refined and sophisticated, with a fresh, clear opening and with deeper, incense- like base notes of oud, sandalwood, and Tonkin musk.

With Calabrian lemon, pink berry, Sicilian bergamot, and heart notes of cedar, galbanum, angelica root, if you are not a fan of those slightly lemony-sharp top notes, you will soon come to appreciate its almost creamy, woody, dry fragrance once it settles down on your skin.

Be prepared to pay a typical Creed price tag, though.

Here are our picks for best winter cologne for younger men…

We are not guaranteeing you will automatically look like a million dollars when wearing this fragrance, but you will certainly smell like it.

In the woody, spicy category, this fragrance is beautifully presented in a luxurious gold bottle which is meant to represent the ultimate in wealth and power.

Paco Rabanne 1 Million has a surprisingly fresh, sensual, bittersweet blend of grapefruit, blood orange and peppermint in its top notes, with neroli, rose, cinnamon and nutmeg heart notes combined into patchouli, oud (there it is again!) and labdanum base notes.

Although it was originally released in 2008, it is a must-have for the cooler weather and it is still one of the most iconic fragrances around, especially for the younger male market.

Launched in October of 2018, the nose behind this fragrance, dedicated to pop idol Nick Jonas, is Carlos Vinals.

Dynamic and irresistible, it was created to “capture the pulsing energy of the city as dusk settles and nightlife takes over.” Party on!

Here is another fragrance with rich, aromatic oud as an ingredient, but this time it is more discreet.

Wonderwood is subtle, spicy and smokey with top notes of bergamot, nutmeg, pepper, and Somalian frankincense. Its heart notes are of cashmeran, gaiac, caraway and cedar wood, with base notes of sandalwood, oud (there it is again) and vetiver.

If you like a woody fragrance tempered with a goodly portion of sweetness and spiciness, this one is for you. It is a little more reserved than other winter scents, but still packs a nice oud-y punch.

The name says it all. The Viktor & Rolf Spicebomb Extreme bottle looks like a hand grenade – and it will give you a knock-your-socks-off-in-a-good-way blast of spicy, oriental-y fragrance that is both long-lasting and distinctive.

Look for hints of chilli, saffron and leather mixed with grapefruit, bergamot and elemi for a sexy, warm scent that stays with you all day and into evening, without overpowering you or any loved ones surrounding you. One spritz is all you need.

The Best Fall and Winter Colognes for Men Over 50

The reference in its name to malt whiskey should give you a hint as to the intended market for this fragrance. It is for a mature, sophisticated man with refined tastes.

Pure malt whiskey is about as up market as it gets in the beverage alcohol department, so you can imagine a globe-trotting multi-billionaire relaxing comfortably in his exclusive men’s club sipping back The Balvenie 50 Year Old, wearing Angel Men Pure Malt.

Rich and enticing, it has a boozy type of aroma mixed with inklings of tobacco. Top notes include fruits, vanilla, whiskey and patchouli with the later creamier, smoother levels of sweetness consisting of vanilla, tonka bean, and a vague suggestion of coffee.

Pure Malt is fruity and malty, as it should be, and redolent of extremely expensive alcohol. And, of course, its richness makes it perfect for the winter months.

Here is another take on sophistication brought to you by the “veddy proper” British luxury goods manufacturer, dunhill London. (Yes, in case you did not know, the ‘d’ has to be lower case.)

It was created by legendary perfumer, Carlos Benaïm. Let’s look at its construction; top notes include bergamot, grapefruit and mandarin; heart notes are essences of neroli, cardamom and olibanum and base notes contain sandalwood, musk and cypriol.

It opens with a citrus freshness before becoming spicy in a musky, woodsy but not overpowering way. Century is not a hugely complicated fragrance, and it will not knock you sideways, but to us it is elegance personified, rather like a true British gentleman.

Watch out. This fragrance may announce your presence long before you come into view. That’s actually not as bad as it sounds, because Tobacco Vanille is rich, addictive and potent, rather like a great cigar.

It opens up with a powerful blast of sweetness in an intoxicating blend of vanilla and tobacco, cocoa and tonka bean. Don’t be put off by its powerful sweetness, though.

Stick with it and you’ll discover layers of cinnamon and other spices below which temper its sugary first impression. This fragrance packs a punch at first, but it has great longevity and versatility.

You can wear it to work, in moderation, then forget about it as you go out in the evening. It will not forget about you, however. You will get positive reactions all day (and night) long.

Which Scent Will You Choose?

We’ve given you some great suggestions for fall and winter colognes, and even though you might be tempted to stick with your one favorite fragrance all year round, remember that your own smell alters with the seasons.

When the temperature changes, your body odor changes with it. In winter you need a heavier, woodier, spicier, and more lasting fragrance; lighter, refreshing perfumes go better with the summer months.

Fragrance is a vital part of every man’s wardrobe. The right one can up your attractiveness quotient by miles. We guarantee it.