Men have been wearing short, fitted shorts for decades, and that’s not changing anytime soon. 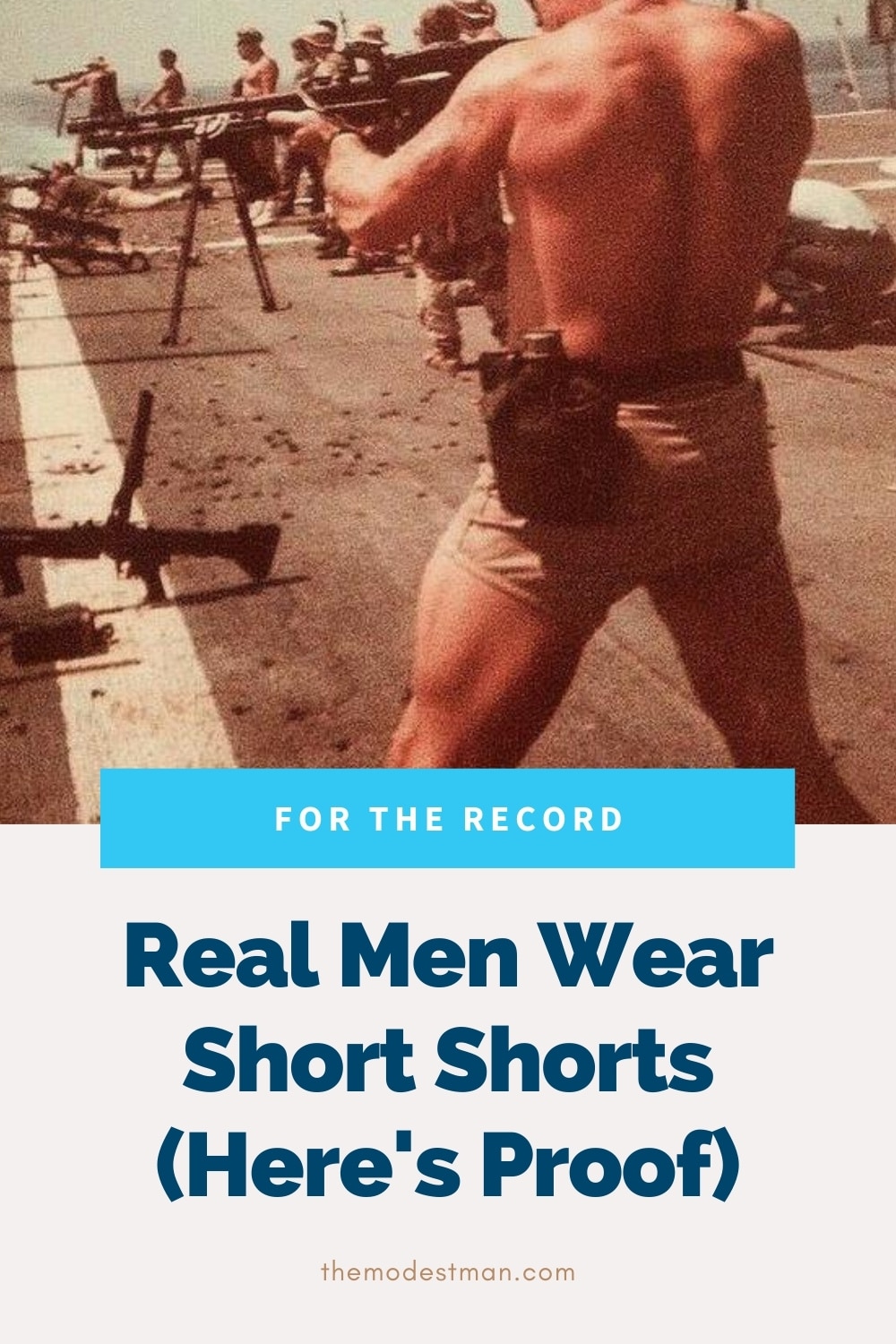 A few years ago, I wrote an article called How to Wear Shorts. In this article, I told guys to avoid wearing baggy shorts that go past their knees.

I thought it was pretty good advice. Nothing too controversial, right?

This post became some sort of troll mecca. In short order, the comments section was flooded with “real” (fragile) self-proclaimed alpha males saying things like:

I won’t even show you the worst comments – those have been deleted – but it’s safe to say that my advice struck a nerve.

Anyway…the point if this post isn’t to define what a “real man” is or isn’t. That would be impossible.

Instead, I’m putting to rest, once and for all, the notion that men shouldn’t wear short and/or fitted shorts.

They absolutely can and probably should.

In no particular order…

This entire article could be summarized with one photo:

Did you know Bob Marley was into socc–I mean, football?

It’s true. And when it was warm outside, he opted for short shorts:

It just goes to show, you don’t need massive muscles to pull off shorter shorts.

This MMA legend rocks short shorts inside and outside the octagon.

In fact, you’d be hard pressed to find a photo of “The Notorious” wearing shorts that go anywhere near the top of his deadly knee caps.

One of youngest, coolest and most popular U.S. presidents loved showing some thigh while he went sailing with his wife, Jackie.

In this pic he wore short swim trunks, a white tee with contrast ribbing, and old school Nike Killshots.

The one and only “Larry Legend” fist bumping Magic Johnson is a show of sportsmanship, both wearing short that hit above mid thigh.

These guys were at the top of their game and knew a little something about function over form.

Rookie, Michael Jordan in 1984 from OldSchoolCool

If MJ preferred short shorts, so do I. Simple as that.

Oh, and if you thought short shorts were just a weird 80s thing, here’s another basketball legend wearing even shorter shorts in the early 60s.

He’s even got a belt buckle on those bad boys. Nice!

There are a few guys on this list who could almost certainly kick your ass (and mine, probably simultaneously).

Jackie Chan is one of them.

Jackie Chan rocking short-shorts in the 1980’s from OldSchoolCool

Tom Selleck and Morgan Fairchild on the set of Concrete Cowboys, don’t show Chandler this photo (1979) from OldSchoolCool

The tucked in polo is a nice touch! #modestmanapproved

Sir Elton John in Los Angeles in 1986…notice the smaller sized watch too?

This just goes to show, you don’t have to be a professional athlete to wear shorter shorts. It’s all about your attitude!

Look at these jacked strongmen showing off their hard work with some high cut shorts.

Go tell this Navy Seal his shorts are too feminine.

Navy Seal shooting from an aircraft carrier. 1970’s from OldSchoolCool

I don’t who you are, guy, but I’d like to shake your hand.

Rollerskating in the late 70s from OldSchoolCool

His shorts are shorter than hers, and neither one of them seems to mind.

My dad taking me for a spin circa 1988 from OldSchoolCool

I bet his kids are awesome too.

Two of the sports GOATs looking mean in the early 80s, back when men weren’t scared to show some thigh.

Try to insult McEnroe’s shorts and you’d get a swift racket to the face!

If you made a Venn diagram with sports and shorts, Andre Aggasi would be right in the middle, rocking a pair of high cut stonewashed jorts.

What a legend! By the way, his autobiography is worth reading.

This British model/bodybuilder/TV personality loves showing off his m a s s i v e thighs.

Can you blame him?

Ronaldo, one of the greatest footballers of all time, is no stranger to short shorts, on and off the field.

He’s not exactly jacked (although definitely lean), which goes to show that short shorts look good on thin guys too.

He’s one of the best pound for pound mixed martial arts fighters in the world.

He’s not afraid of trolls, and he’s certainly not afraid to show some thigh.

Let’s just round out this list with one of the most traditionally masculine men in the public’s eye today, tough guy David Goggins:

Next time you hear someone say something stupid like “short shorts are for women” just send them a link to this post.

From pro athletes and movie stars to elite soldiers and regular guys, short shorts have been a go-to wardrobe staple for decades.

Do you wear them? Share your thoughts in the comments below!