Here are Dev’s top 12 outfits from the seasons one and two.

First off, if you haven’t watched Master of None yet, I highly recommend it. It’s about a young New York City actor trying to build his career while figuring out what he ultimately wants to do with his life.

If you’re in your 20s or 30s, you’ll notice that the cultural commentary is spot on. From wasting an afternoon trying to find the best lunch spot on Yelp to the nuances of texting a potential romantic partner you just met, it’s just so…accurate.

The show’s writers and directors, Aziz Ansari and Alan Yang, really have their fingers on the pop culture pulse, and they’re incredibly adept at putting viewers in these everyday situations that feel so familiar.

Moreover, since Dev’s fictional life is loosely based on Aziz Ansari’s real-life experience and preferences, he’s borderline obsessed with fashion and food.

The show is beautifully shot and directed – everything from the camera angles to the lighting and music. And every episode is laced with a healthy dose of #FoodPorn and outfit inspiration.

I could write a whole post about Arnold’s unique sense of style, but that might be better suited for a “big and tall” blog.

Master of None employs a stylist named Dana Covarrubias to help put together each character’s outfits. According to Dana, Dev’s style is heavily influenced by Aziz’s actual real-life style:

…Aziz is into fashion, he loves fashion…he came in and told me the five or six brands he really loved and was like, let’s start from there. We even incorporated some of his personal closet in the show…

In fact, they even use pieces from his personal wardrobe in the show, which is very cool!

From what I could find, Aziz’s (or Dev’s) favorite brands are:

For season two (much of which was shot in Italy) Dev wears lots of Italian designer brands, according to his stylist Dana:

…his blazers were Caruso, all of his pants were Isaia. We did a lot of Brunello Cucinelli and Zegna and Boglioli.

You might have noticed that many of these brands are pretty high end. Apparently, Dev has expensive taste and can afford nice things – much like real world Ansari.

In the outfits below, I’ll try to link to everything Dev is wearing, but it won’t be 100% accurate. In many cases, I’ll just link to something similar (and probably cheaper).

In no particular order…

It appears to be sold out at places like Barney’s and Farfetch, but then again, most of us aren’t about to drop thousands of dollars on a new coat.

A budget alternative would be the Levi’s Sherpa Trucker Jacket, although it’s not quite the same thing.

It looks like Aziz wearing suede Chelsea boots in a taupe color, like these ones from Reiss. He’s been seen wearing this Penfield beanie throughout the show and on the streets of NYC. 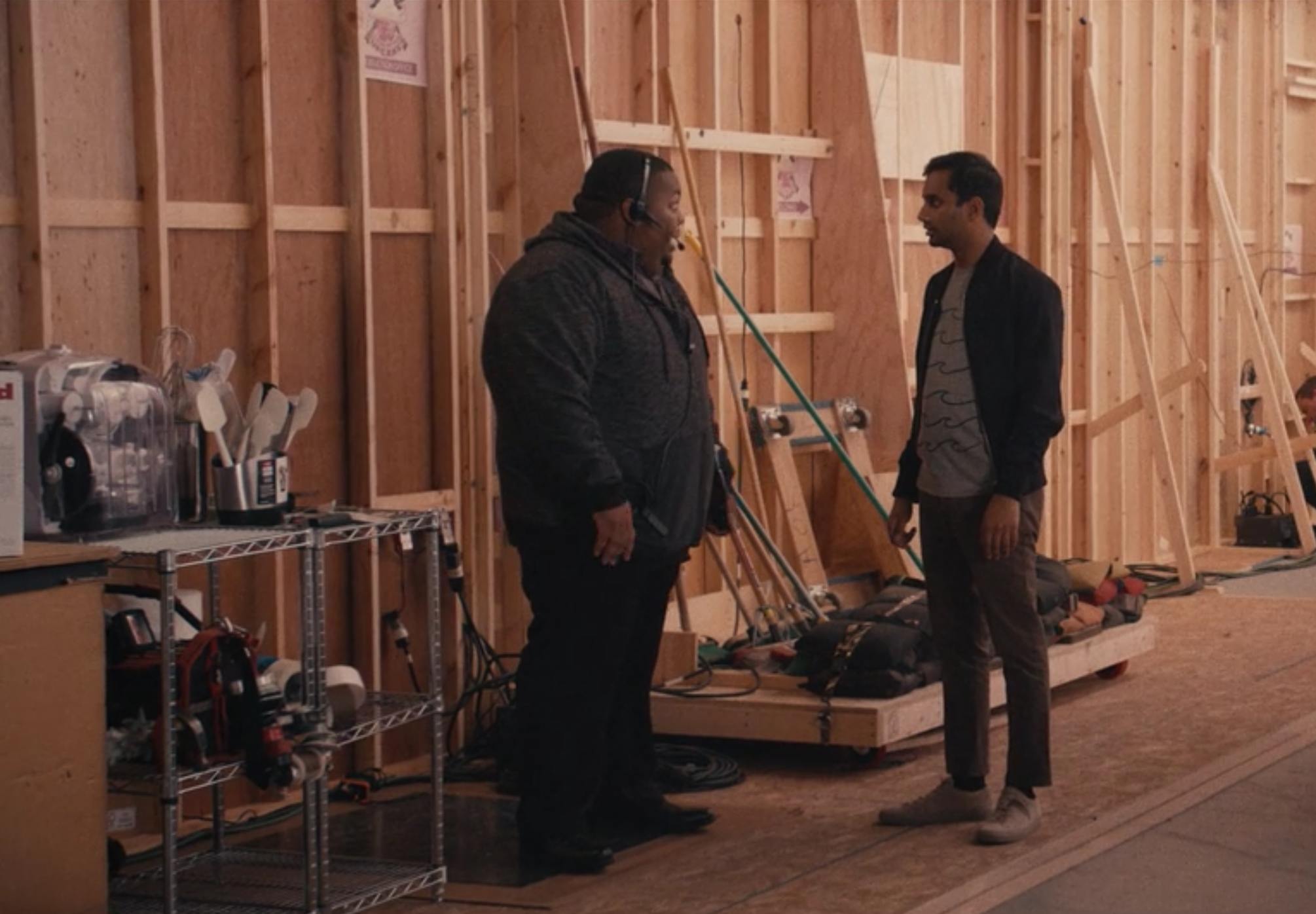 #2: This outfit is right up my alley. Any guy could pull off this color palette, but it’s especially great for shorter men, due to the fact that it’s relatively low contrast.

Aziz loves lightweight jackets like this navy bomber by A.P.C. (most likely).

I’d probably go with a solid grey t-shirt, but the wave print tee is consistent with Aziz’s style. He loves to add something unique – like an interesting graphic tee – to his outfits.

Knowing Aziz, these greyed out, perforated are probably by Vince, but these Puma Classics would get the job done for half the price!

The loafers are from J.M. Weston, and the slacks are from Isaia. The t-shirt looks a lot like this one by Sunspel (probably in XS).

It’s an older leather flight jacket that’s sold out everywhere, so you’d have to find it secondhand on Grailed or eBay.

#5: This is one expensive getup…

Dev’s beanie is from Loro Piana, and it’ll run you about $315. The coat is that same YSL one from the first outfit (above).

The black leather gloves are probably Prada or something similar, but these would work too.

#6: This black leather jacket might be the coolest individual garment Dev wears on the second season of Master of None.

It’s the Saint Laurent Leather Biker Jacket, and it’s available on Mr. Porter now. You could also buy it secondhand on eBay.

You could also save about $4,700 and buy this similar jacket from Zara. The black jeans are from A.P.C., available on Mr. Porter. 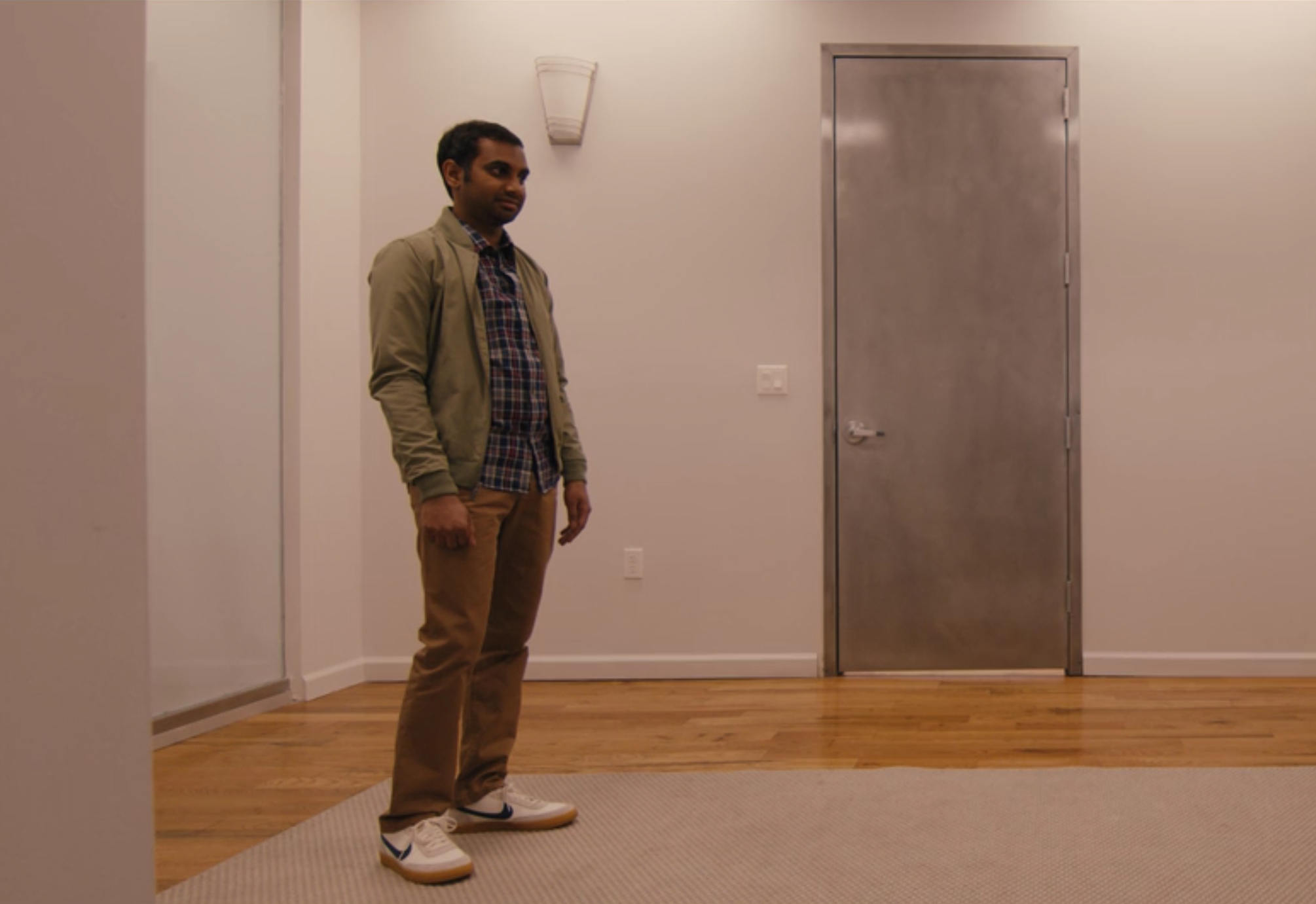 #7: Here’s another versatile, basic and kind of “safe” outfit that anyone could pull off without breaking the bank.

Dev has swapped his much-loved CP Achilles for the Nike Killshots, a more affordable (but equally cool) sneaker.

Note: Can’t find any Killshots in stock? Check out these 10 alternatives.

He’s wearing Unis chinos, but you could go with the Banana Republic Fulton in acorn. The olive bomber is probably from Asepsi, but the Uniqlo version would work just as well.

#8: This is one of my favorite outfits from the second season of Master of None.

It was just fun to play with the idea of Italian tailoring. We made their inseams a bit shorter than they’re used to and had them rock the no-sock and loafer look. We played [with] pocket squares and had them unbutton their shirts a little more than they normally would. It was a lot of fun.

#9: This is a classic, super casual Aziz Ansari look.

His clothes pretty much always fit properly, but they’re never tight or restrictive. He seems to appreciate comfort.

Also, the splash of color in his hoodie is a hallmark of Aziz’s style, both in real life and on the show. I think warm tones like orange and yellow look especially good with his skin tone. 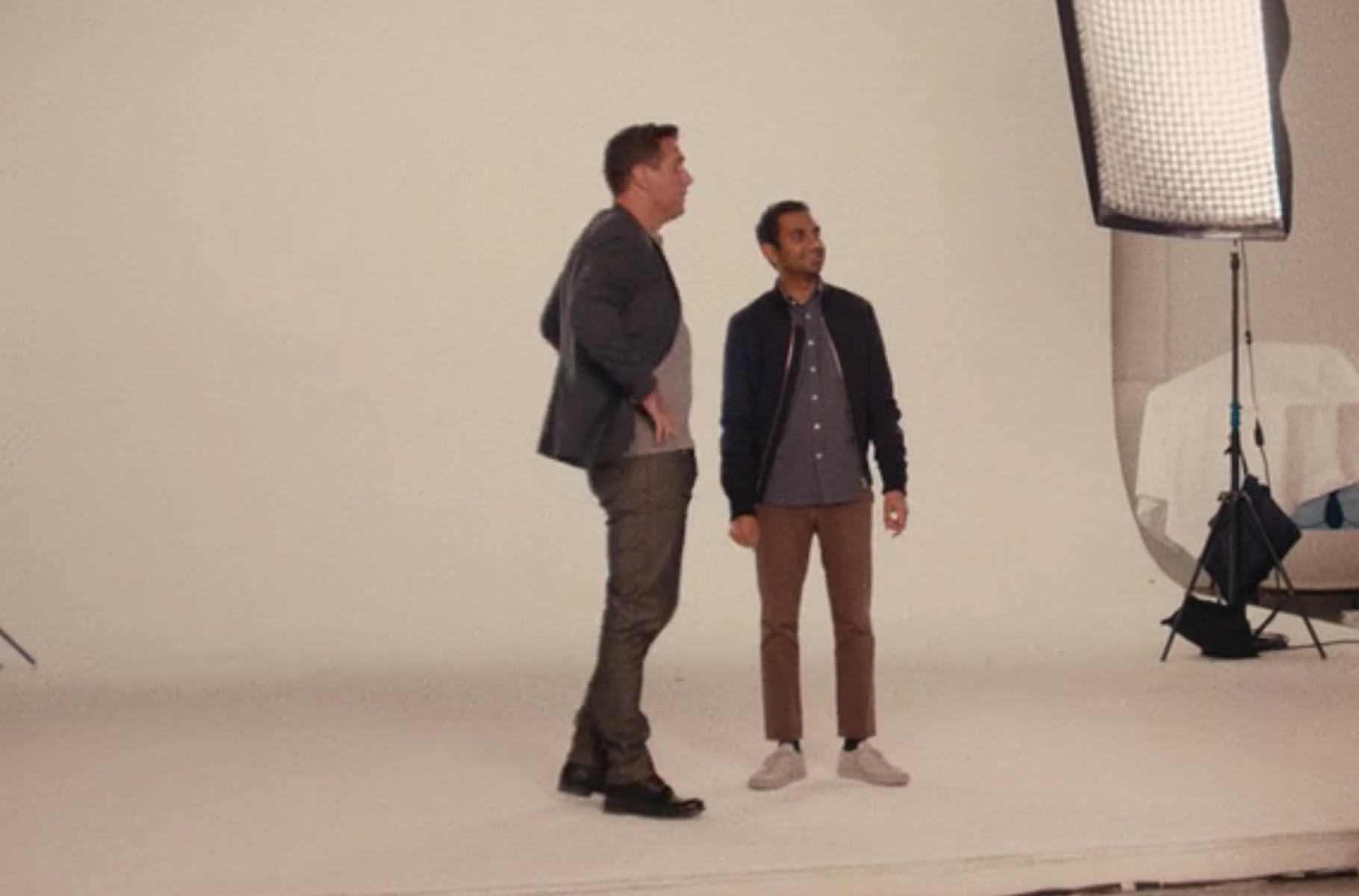 The navy bomber, acorn chinos and white are a classic combo that won’t go out of style anytime soon.

The are classic Common Projects Achilles, but you could go with the less expensive New Balance 791s or Vans Old Skool by J. Crew.

I couldn’t find this exact jacket, but it’s most likely from a high end designer brand.

Personally, I’m not a huge fan of the varsity jacket look, but it’s definitely somewhat of a statement piece.

#12: This man knows how to travel in comfort and style!

I’m not totally sure who makes the duffle bag, but this one from Filson is almost the same color.

Do you like his style? Would you wear any (or all) of these outfits? Do you watch this show?

Leave your answers in the comments below!