There’s no doubt that height can be an advantage in sports, but that doesn’t mean shorter men can’t compete (and win) at the highest levels. 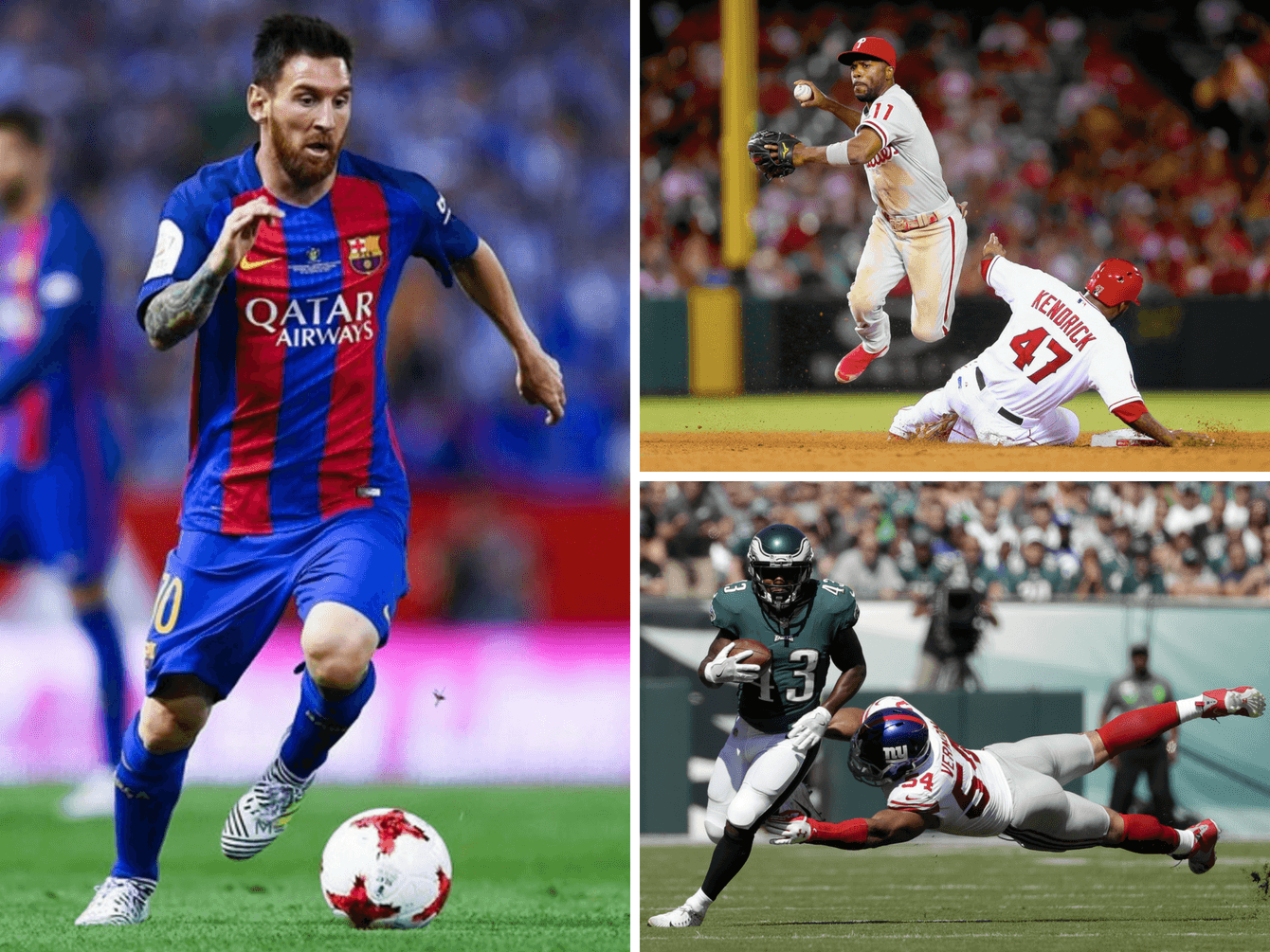 Whether they’re stealing bases during America’s favorite pastime, ducking around defenders on the basketball court, or dodging punches in the boxing ring, short men often boast a distinct competitive advantage.

Short on time (heh)? Feel free to jump to one of our Top Three Favorite short athletes:

Want to see the whole list? You’re in luck! You can use the sortable table below or keep scrolling for a more details about each athlete (including some fantastic photos).

From baseball and basketball to cycling and MMA, here are 46 famous athletes who reached the very top of their game.

Tim Raines is widely regarded as one of the greatest leadoff hitters and baserunners in baseball history.

He was the 1986 NL Batting Champion, a seven time All-Star and four time stolen base leader. Not bad for a five foot eight Hall-of-Famer!

This 18-time All-Star is better known for his witty quotes and managerial abilities than his ten World Series championships (still the MLB record for one player).

Berra is also one of only five players to win AL MVP three times.

J-Roll is the Philadelphia Phillies’ all-time leader in hits and was regarded as one of the best defensive shortstops in baseball.

His NL MVP in 2007 came right before key contributions to his team’s 2008 World Series victory.

Furcal is a Dominican and former professional baseball shortstop.

He was the National League Rookie of the Year in 2000 with the Atlanta Braves, and he won a World Series title with the Cardinals in 2011.

One of only five players to ever have four hits in three consecutive games, Furcal was also a reserve member of the 2010 NL All-Start team.

Joe Morgan did two awesome things in the 1975 and 1976 seasons: led his Cincinnati Reds to World Series victories and won NL MVP twice.

This 5’7″ man of modest height is considered one of the better defensive players of all time, which is why he was inducted into the Hall of Fame in 1990.

Kirby spent his entire major league career with the Minnesota Twins. He leads the franchise all-time in hits, doubles, runs and total bases.

He also retired with the second highest career batting average at .318 (right-handed).

“The Scooter” was part of the legendary Yankees dynasty that ran for 10 AL titles and 7 World Series victories in his 13 seasons.

Rizzuto is hailed as one of the best bunters in MLB history.

Tyrone Curtis Bogues was the shortest player ever to play professional basketball in the NBA.

His height (or lack thereof) didn’t stop him from a stellar 14-year career that, incredibly, included 39 blocked shots!

Spud is famous for winning the NBA slam dunk contest in 1986.

Think about that for a minute: one of the shortest players in NBA history won the slam dunk contest.

Webb is one of two men under six feet tall to ever win this infamous contest.

Hirsch played for the Boston Celtics, way back when the NBA was still the BAA (Basketball Association of America).

Behind Mugsy Bogues, Boykins is the 2nd shortest player to ever grace the NBA court as a pro baller.

He famously nailed two free throws to seal a Wizards’ victory in 2009.

Grant played for six different teams across his nine year NBA career after being picked 52nd overall in 1989.

He later released an autobiography titled 94 Feet and Rising: The Journey of Greg Grant to the NBA and Beyond.

Pernell was more than just an accomplished boxer: he won titles in lightweight, light welterweight, welterweight and light middleweight!

He was also named fighter of the year in 1989 by The Ring Magazine.

A truly legendary short athlete, Pacquiao is one of the greatest boxers of all time.

He’s won 11 major world titles and currently serves as the Senator of the Philippines.

Tactics and attitude aside, Money Mayweather is undisputedly one of the best fighters of all time.

He’s been ranked by ESPN as the #1 best pound-for-pound boxer of the last 25 years.

In addition to having garnered an intimidating reputation at the CrossFit Games, “Speal” is an affiliate owner and trainer for CrossFit headquarters.

Spealler continues to train and coach at CrossFit Park City in Utah, where he lives with his family.

A former college wrestler and Navy Seal, Bridges has been a CrossFit athlete since 2005.

Bridges is known for his intense victory scream, as he’s on or near the podium almost every time he competes.

He is the head coach at Reebok CrossFit ONE and a part of the CrossFit HQ Seminar Staff.

He won the Tour of Spain a record breaking three times and raced alongside Lance Armstrong on the U.S. Postal Service team.

Bettini is considered one of the better cyclists and classics specialist of past decade.

He’s a former Italian world champion road racing cyclist, and he did a stint as the coach of the Italian national cycling team.

He ended up finishing 12th overall, in addition to winning a few minor competitions over the course of his career.

Sproles is the all-time leading rusher in Kansas State history. He broke the NFL single season record for all-purpose yards in 2011 with 2,696 yards.

He’s the first player in NFL history with over 2,200 all-purpose yards in four consecutive seasons and is ranked 8th all-time in career all purpose yards.

Soapy Shapiro played for the Staten Island Stapletons in the 1929 NFL.

He’s officially hailed as the shortest man ever to play professional football in the National Football League.

Leonard was a solid contributor to multiple NFL teams over his 10 year career.

Rice played his entire professional career for the Baltimore Ravens before famously being indicted for assault.

He is ranked as the Ravens’ second all-time leading rusher behind Jamal Lewis.

He became known as “The Hitman” because of his hard-hitting style. Apparently, powerful things come in small packages!

Jones-Drew led the NFL in rushing yards in 2011 and is a three time Pro-Bowler.

He now works as an analyst for multiple programs on NFL Network.

Gionta captained the U.S. Olympic team in 2018’s bid for the title.

He holds a number of franchise records for the NHL’s New Jersey Devils, including number of goals in one season (48).

His birth name was Lee Jun-fan, but his millions of fans know him as Bruce Lee.

Perhaps one of the most iconic men of modest height, Lee was an accomplished martial artist, fight choreographer, actor and film director.

Dodson is ranked #7 in the official UFC Bantamweight rankings.

He is the winner of Spike TV’s The Ultimate Fighter: Team Bisping vs. Team Miller.

He is known for his ultra aggressive fighting style. Call it a Napoleon complex if you want, but sometimes modest men just need to let it out.

Brimage is a versatile MMA fighter, clocking in 14 wins over the course of his career.

His interest in mixed martial arts was sparked while watching Dragon Ball Z as a child. I was more of a Ninja Turtles kid, but then again, I’m not in the UFC.

Pazeres is a Brazilian mixed martial artist currently fighting as a lightweight for the UFC.

As a youngster, Prazeres was inspired by Bruce Lee (another famous short martial artist). He won his first six professional fights, and he has an impressive career record of 24 wins and just 2 losses.

A professional MMA fighter since 2004, Howarrd is currently (2018) competing in the Middleweight division.

Howard is 25-13 overall in his MMA career so far, and he’s competed for a number of international teams.

Santos is currently ranked as #1 in contention for the Professional Fighters League belt.

Mighty Mouse Johnson is the current Flyweight Champion of the UFC.

He holds the current record for the longest championship reign and has defended his title 11 times.

Generally considered one of the best Lightweight competitors of all time, Muscles Sherk holds one of the longest undefeated streaks in MMA history.

He only lost four times!

Retired American stock car driver, Martin started his racing career as a young man on the dirt tracks of Arkansas.

Martin has been described by ESPN as the best driver to never win a championship, despite the fact that he holds the all-time IROC record with 13 wins.

Gordon is undoubtedly one of the best NASCAR drivers of all time, winning at least one pole in 23 consecutive seasons.

Fox Sports ranks him as the fifth best driver in NASCAR history.

One of the shortest professional racers, Abreu has won a number of titles, including the 2015 and 2016 Chili Bowl.

He’s run 26 races over three years in the NASCAR Camping World Truck Series with a best finish of 13th place.

Hellebuyck become a U.S. citizen in 2000 and competed in the U.S. Olympic Trials, but he sadly did not make the team.

Messi is a legendary soccer player who is considered by many to be the best of all time.

He has a record-tying five Ballon d’Or awards and has won 31 trophies with Barcelona.

Often considered the best professional soccer player of all time, Maradona was joint FIFA player of the 20th century (along with Pelé).

Maradona played in four FIFA World Cups and led Argentina to a 1986 championship (while earning the coveted MVP award).

Also widely regarded as one of the best players to ever grace the field, Pelé won three FIFA World Cups over the course of his career with the Brazil national team.

As it turns out, the top three soccer players of all time have been men of modest height. Represent ??

He is widely regarded as one of the best speed skaters of his generation. On top of that, Ohno is a sought after motivational speaker and generous philanthropist.

These famous short athletes aren’t just as good as their taller counterparts. They’re some of the best competitors in their respective sports.

Height didn’t hold them back from reaching great heights, and it shouldn’t hold you back either – in sports, business, relationships or life.

So go set that record, get the championship ring, defend your title and lead your team to victory! Oh, and make sure to look good doing it 😉

Justin Gage is a Product Manager, Data Scientist and writer. He spent some time as a VC Analyst and I majored in Data Science at NYU Stern. You can follow Justin on Twitter.