If you’re looking for the best non-Luxottica sunglasses, we’ve rounded up 11 great brands and models. Read on to see the full list.

These days, EssilorLuxottica is looking like the Disney of the sunglasses game. Since French Essilor and Italian Luxottica merged in 2018, it’s as if every brand in the industry is in their club. After all, Luxottica doesn’t just own several eyewear brands, but lens technologies.

There’s absolutely nothing wrong with wanting iconic Ray-Bans or sleek Pradas, but if that’s not what you’re going for, it’s definitely easy to pay more than you have to under the Luxottica umbrella.

Money aside, maybe you want something unique, indie and unheard of, or what may be ahead of the curve. There are many reasons to check out these non-Luxottica sunglass brands and models. 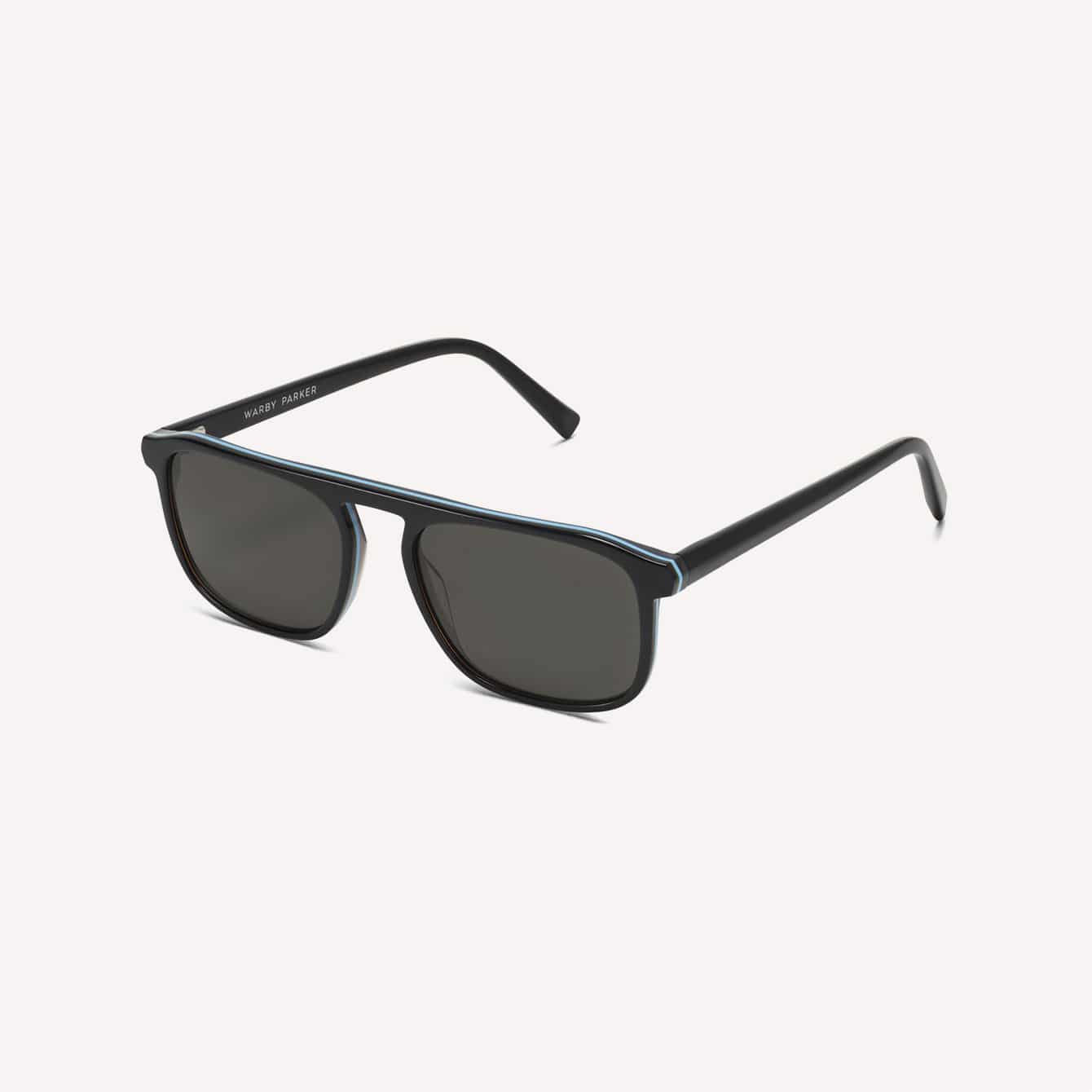 The Black Sky Eclipse Lyon from Warby Parker is a popular model with a rectangular shape. The lenses are scratch-resistant and block 100% of UV rays. 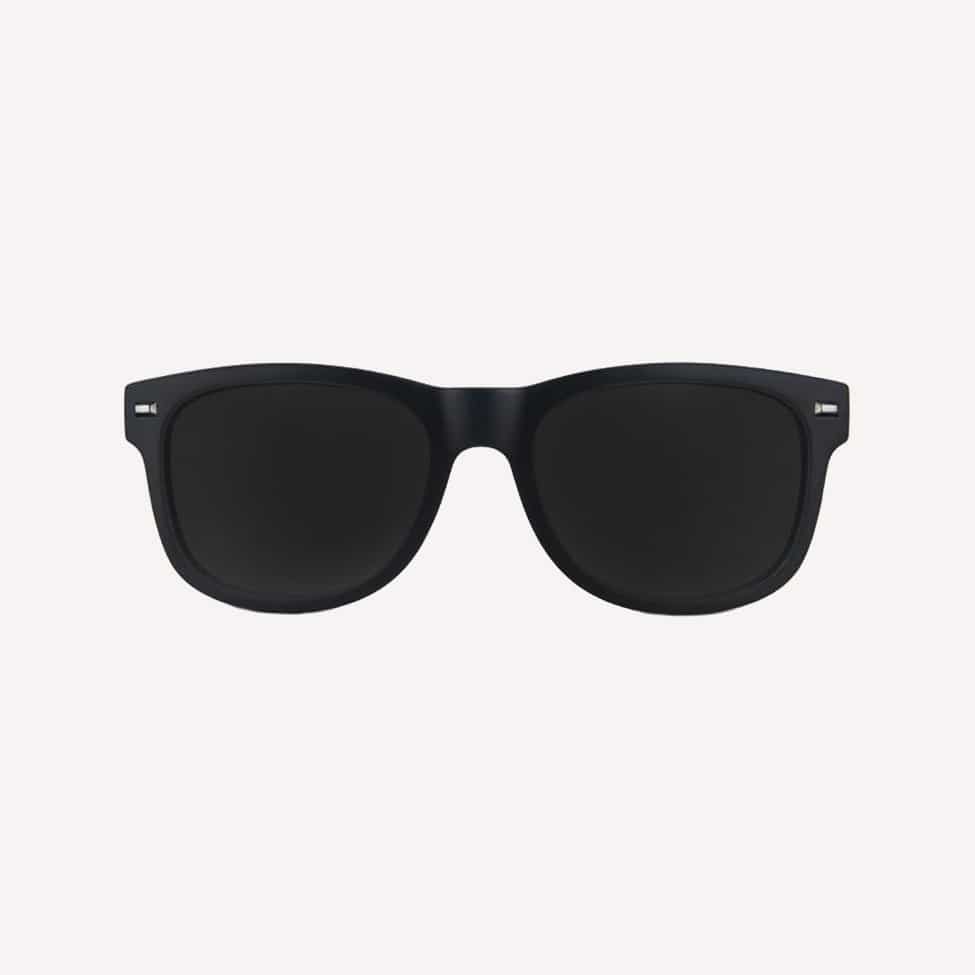 Tomahawk Neuralyzers shades are equipped with smoke-colored lenses with UV400 protection. They’re an understated take on the classic Wayfarer design. 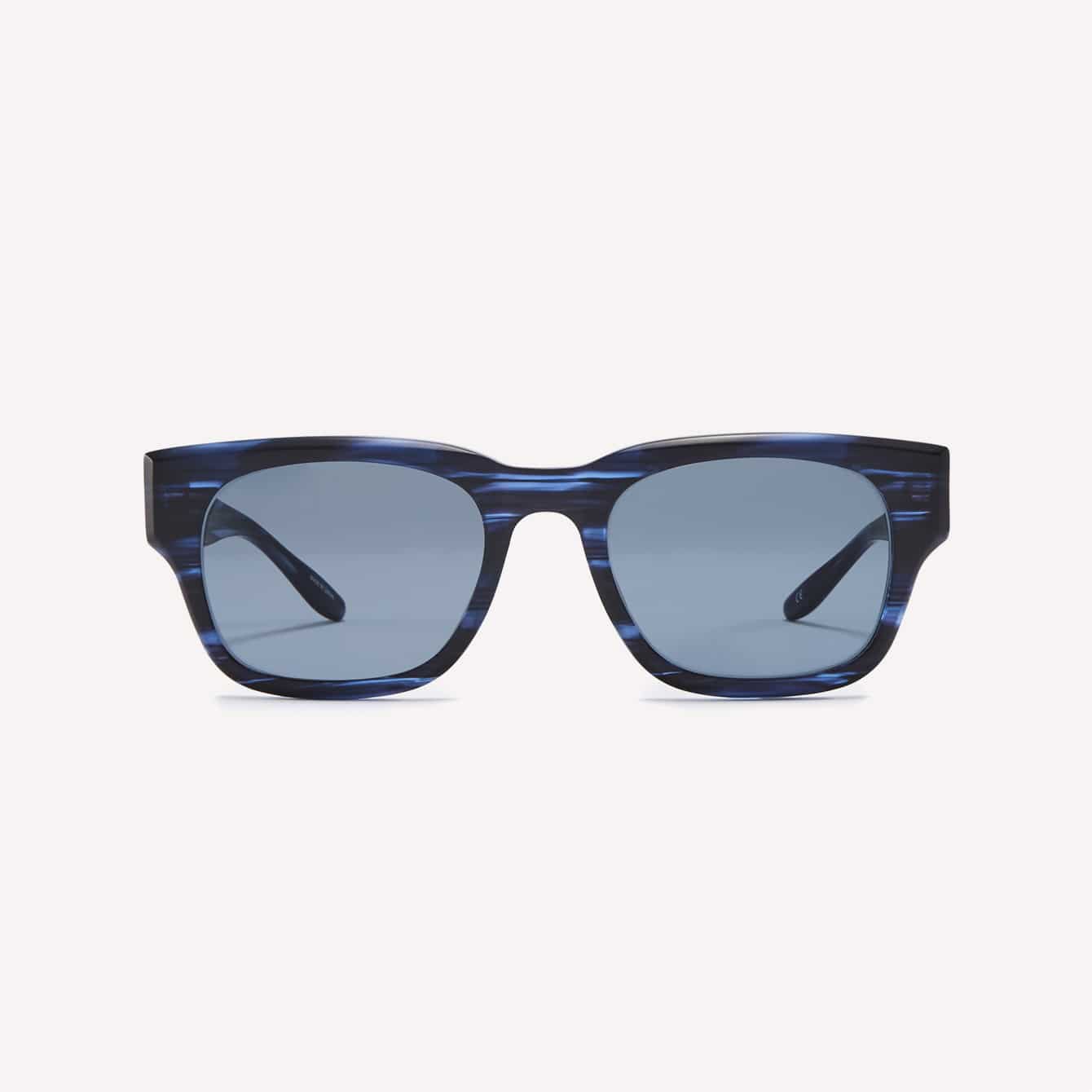 The Domino is a stylish and masculine pair of shades. They have a strong and sturdy look. The blacks are conservative but not stuffy and look great on most face shapes.

Here are some non-Luxottica brands listed in no particular order…

Tomahawk was launched with the pretty standard purpose of serving up good sunglasses at lower price points, and utilizing small-batch production to do so.

What makes them different is how well they deliver on the price-to-quality ratio, and how they literally have a style for every type of guy, experimental or classic.

Quality-wise, the small batch approach allows them to be meticulous with their QA. Tomahawk even has their own glare reduction and blue light filtering technology called BlueLight+, so they’ve got style and performance.

And instead of being movie star-approved like most of Luxottica’s brands (nothing wrong with that though), Tomahawk works with pro athletes, like two-time Super Bowl champ Chris Hogan. There’s a genuine focus on practicality, functionality, and efficiency, on top of style.

One of their major best-sellers are the matte black Neuralyzers. They’re an understated take on the classic Wayfarer design, and are versatile enough for most, if not all, guys. In that sense, they represent the Tomahawk brand overall. They’re equipped with smoke-colored lenses with UV400 protection.

Randolph Engineering is a Massachusetts-based sunglasses company started by Royal Air Force Jan Waszkiewicz and machinist Stanley Zaleski in 1973. As such, they’ve got some of the best metal frames and aviators out there.

Their jewelry-grade sunglasses come in several thin-line styles, and the metal construction is truly top-notch. Each is made using a 200-step process, twisting, soldering, assembling, all by hand.

I actually think their metal-frames are better than Ray-Ban’s metal glasses. At least, they feel more substantial when I wear or hold them.

Whether in gunmetal or 23k gold, check out their Aviator shades. Unsurprisingly, given Randolph Engineering’s heritage, these are Air Force-accurate with a slick but utilitarian-understated design.

Their growing collection is based on classic silhouettes that have been popular for a long time (i.e., frames that stand the test of time).

They’re an absolute steal for under $100, and they’re available in regular and large sizes.

The only thing we’d like to see from Enemy is a few options designed to look great on narrow faces.

If you’re looking for a luxury brand name that’s like Luxottica but not Luxottica, Carrera belongs to the Italy-based Safilo Group, a company that focuses on sports eyewear.

They’ve been popular since the 1950s for their oversized shades, which go in and out of style, but always seem to be acceptable if it’s a Carrera regardless of the day’s trends. This is likely thanks to Scarface’s Tony Montana, and its Luxottica-like celebrity following.

The brand is famous for its historical relationship with Porsche cars, hence its Carrera namesake.

So with these sunglasses, you get the focus on performance usually saved for diving goggles and a sort of guy street cred that luxury brands don’t always have. It’s like the Tag Heuer of sunglasses.

The Carrera Safari65 is one of their best sellers. It’s a reissue, or a “remaster” as Carrera dubs it, of the iconic original design to celebrate its 65th anniversary. It boasts the oversized mask and bold brow bar aesthetic that people go to Carrera for.

It’s made out of Optyl, which was invented by the brand’s founder in 1964. It’s a plastic that’s heat-hardened resulting in a material that weighs 20% less than acetate and is allergen-reduced.

A New York City staple, Moscot has been providing eyewear for local city dwellers, and the discerning set, for over a century. They manage to encapsulate a style that can simply be described as “city guy fashionable.”

By that, I mean downtown creatives, uptown preps and normcores, and borough cool guys, can all agree that Moscot makes nice sunglasses.

That’s because these are genuinely high-quality frames and lenses. They’re handcrafted from Italian acetate with diamond rivets and comfortable nose bridge designs.

Best-seller, Lemtosh, was designed and prototyped by the 5th generation of Moscots right in the city. It features the signature acetate tips, a keyhole nose bridge, and a seven-barrel hinge.

The shape is so classically cool, that you can go from Cary Grant in North by Northwest with the simple tobacco or tortoise variations, to bold and artsy with the transparent sapphire version, to anywhere in between with the brown ash or umber crystal.

A surprise to no one, Warby Parker makes this list for offering great styles that undercut the competition. They’ve obviously blown up as a brand since they debuted in 2010.

People loved their digital try-on system, though today they’ll send you up to five pairs to try on and return, or you can just visit one of their ~70 locations.

The fact their glasses are made in China isn’t offensive because they use the exact same higher quality factories that Luxottica does. Unlike Luxottica sunglasses though, they’re priced like they’re made in China. And speaking of pricing, Warby uses a uniform system, starting at $95.

You can consider one style over another, making your decision solely on the style without worrying about whether one or the other costs more.

The Black Sky Eclipse Lyon is a popular model with a rectangular shape and subtle angles throughout for added visual dimension that doesn’t distract.

Within that same different-but-subtle theme, a stylish sky blue line that travels all around the edge of the frame. The lenses are scratch-resistant and block 100% of UV rays.

Italian brand RetroSuperFuture has been feeding the sartorial appetites of rebels, fashion-forward non-conformists, and the quirky since 2007.

From colorful acetate sunglasses to lenses so oversized the frames literally sit inside of them, their eclectic collection is still underscored with a sleek and modern aesthetic. They’re fun, but they aren’t cheap toy store products or costume accessories.

If you love an edgy, unique, and off-the-runway look, you can look to RetroSuperFuture for shades or eyeglasses for around $200 a pair.

The Tuttolente Paloma is one of the brand’s many styles that take an iconic design, in this case a sort of Wayfarer-esque look, and build them completely out of lens material.

The sunglasses are literally a reflective silhouette. Despite that, the ivory variation manages to be relatively understated. If you like this unconventional concept, but aren’t ready to go all-in, their Screen Palomas feature plastic-constructed arms.

The most glamorous brand on the list, Jacques Marie Mage is an LA-based maker of collectible and rare sunglasses.

Their claims to fame are historical Hollywood and fashion motifs, the use of precious metals, and their partnerships with celebrities.

Jeff Goldbum and Jacques Marie Mage designed sunglasses based on his iconic spectacles, but in different hand-crafted colorways.

The Velvet Underground & Nico Squeeze frames are inspired by Andy Warhol and come with a custom tie-dye vinyl LP. Naturally, this brand has attracted a following from celebrities and taste-makers.

Jacques Marie Mage are top-quality, small-batch, and certainly not cheap. However, this combination of qualities will ensure that you’ll often, if not always, be the only guy sporting a pair in most situations.

One excellent example is their oversized Enzo sunglasses. They’re a remake of the same blocky and bold shades that Enzo Ferrari himself wore. They even come with red-tinted frames -literally rose-colored glasses.

With their focus on athletics, performance eyewear, and goggles, I consider SunGod the non-Luxottica answer to Oakleys.

Like Tomahawk, actual athletes help develop these shades, so they have all of the usual suspects of good performance sunglasses, and then some: 100% UV protection, triple-layer scratch resistance, and unlike Luxottica, you can actually buy affordable replacement lens kits from SunGod.

The best Ray-Ban has ever done for me in a broken lens situation is a $25 voucher for a brand new pair.

While they have plenty of goggles and hardcore cycling and running shades, its their more versatile Renegades that seem to be the star of the show. They’re so popular that SunGod decided to give them a direct link on their landing page.

The Renegades are made from their trademark Adventureproof material, which are some of the most flexible frames I’ve ever seen. Some grey variations have a cool carbonesque aesthetic.

The lenses are made from SunGod’s 8KO, a technology that uses nylon-based materials for a higher grade than the industry standard. This means great protection without compromising clarity.

The go-to Instagram spectacles, Lexxola has made a name for itself by gracing the faces of influencers, the on-line set, and trendsetters all over. Part of the reason is how photographable their retro-inflected tinted shades are, but they’re also just undeniably cool and fun looking.

Lexxola takes pride in combining tried-and-true manufacturing techniques with brand new cutting technology. This ensures they can get that perfect shape each time, without sacrificing human quality control.

Their black and blue Jordy shades are unisex, sporting the brand’s signature square silhouette. Aesthetically, they have a best-of-the-60s quality. But less in that groovy sort of way, and closer to how 1990s fashion had a ‘60s nostalgia factor.

The shape is very Michael Caine, but details like the raised nose bridge and perfectly clear blue lenses lean into Millennium futurism.

Launched by Oliver Peoples veterans, Barton Perreira is an independent brand that takes a technique and science-focused approach and dresses it up in a fashion-with-a-capital-F brand of luxury.

All of their glasses are handcrafted by Japanese artisans, made with painstaking specifications and using plant-based acetates and lightweight titanium.

Few runway-focused brands invest in the things you can’t see, but Barton Perreira is all about attention to detail and exacting craft. It’s practicality, but leveled up with chicness.

The Domino is a stylish feline-esque pair of shades made masculine by their strong and sturdy look. The beveling is hand sculpted for balance and sleekness.

The blacks are conservative but not stuffy, and look great on most face shapes. Meanwhile, the midnight blue sports a stylish texture that’s fashion-forward, but only borderline experimental.

Yes, Luxottica does a pretty good job of ensuring their brands keep their pre-merger personalities. It’s sort of like when Seiko bought Orient.

However, I doubt clothes-focused fashion houses like Prada or industry forever-icons like Ray-Ban would ever go the RetroSuperFuture route.

On top of that, even the most objectively high-quality sunglass brands will charge that extra for the kinds of designer names under the Luxottica umbrella. And even if the lore of a great brand is your thing, there are indeed still options outside of Luxottica.