Looking for the best boxer briefs money can buy in 2021? We’ve got you covered (pun intended). 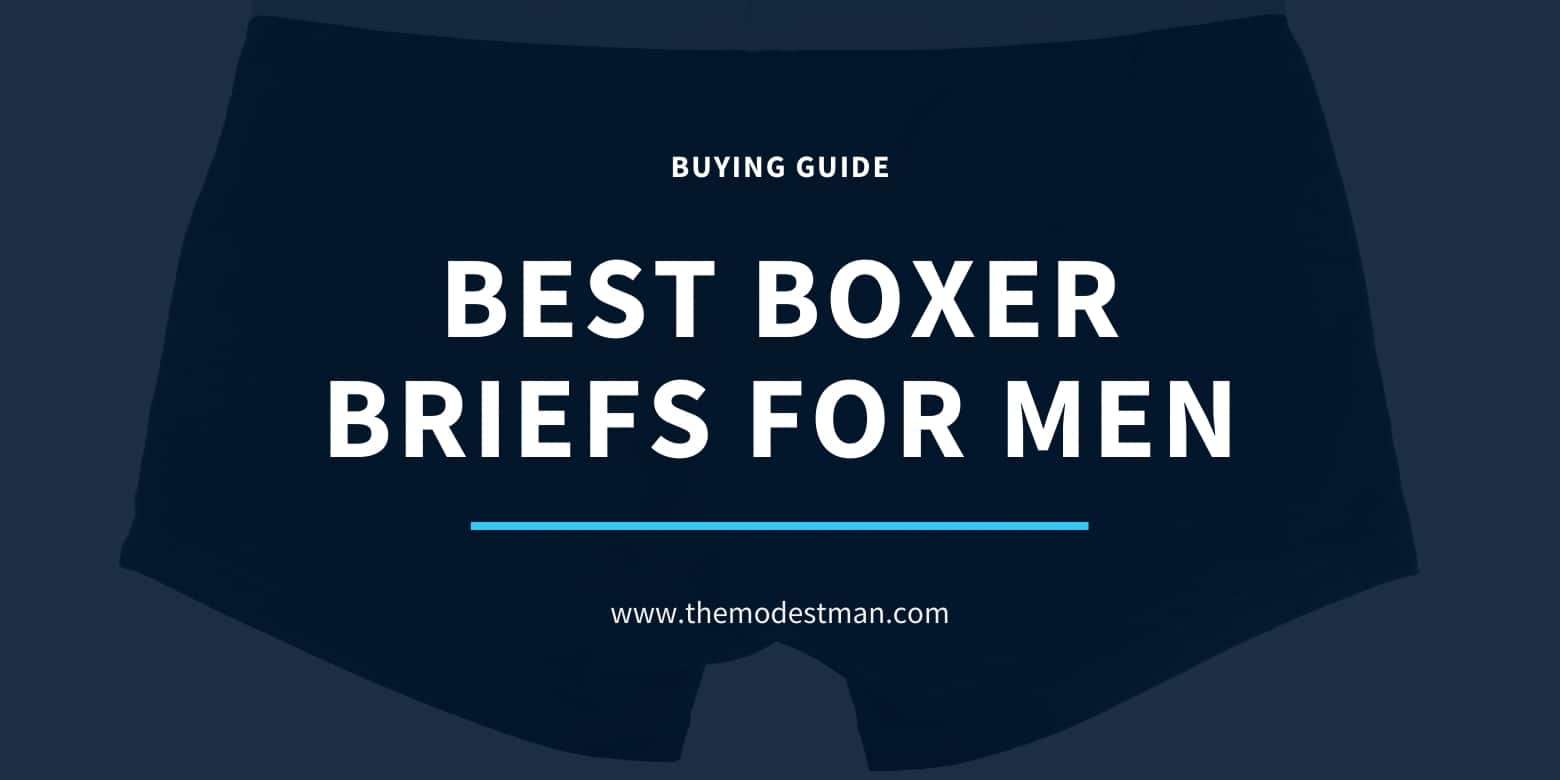 Not only do you wear underwear more than any other article of clothing, but it also covers one of the most important parts of your body.

It’s crucial that your underwear is comfortable, but too many guys settle for ill-fitting, low quality underwear that was probably under questionable working conditions.

I used to be one of those guys. I wore whatever cotton boxers I could find in a multipack on sale at the department store. I thought this was as good as it gets for underwear.

These days, though, there are so many amazing underwear options for men. This is awesome, but it means you have to figure out which brands are best for you (and worth your money).

Want the short list? Here are our top three picks for the best boxer briefs you can buy right now: This lesser-known brand offers tremendous value for the price, plus two different fits (standard and athletic). These 7" lululemon boxers are made from super soft, stretchy, breathable modal fabric. If your budget allows, they're worth the price. 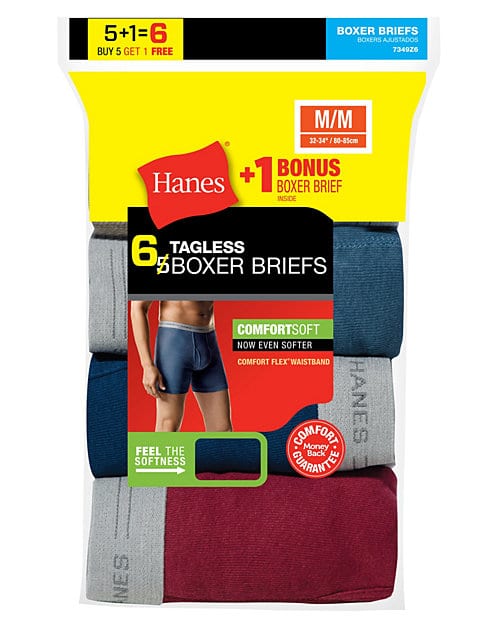 These Hanes ComfortFlex Boxer Briefs are super comfortable and surprisingly durable for the price (roughly $3/pair on Amazon).

Buy on Amazon Buy on Zappos

Every guy is going to have their own preferences when it comes to which type of underwear takes the crown (and jewels), but for me it’s boxer briefs, hands down.

Boxers are too baggy to wear with slim fit pants, so those are out.

I don’t like the way traditional briefs feel tight along each side of the crotch, and I don’t think they look as flattering as boxer briefs.

Trunks are okay too, but I find that the shorter leg tends to ride up much more than longer boxer briefs.

So for me, boxer briefs are definitely the best type of men’s underwear. But what are the best boxer brief brands?

I’ve tried many, many different pairs of boxer briefs, from long-standing popular brands to relative newcomers (some of which are incredible).

My two main criteria for great boxer briefs are:

If it also looks great, that’s a bonus. If I can work out in them, that’s a double bonus!

So without further adieu, here are the best boxer briefs for guys, in my opinion:

Most of the boxer briefs on this list are somewhat premium (between $15-35 per pair).

I understand that many guys can’t or don’t want to spend that much money on underwear, and I have good news!

These Hanes ComfortFlex Boxer Briefs are super comfortable and surprisingly durable for the price (roughly $3/pair on Amazon).

I’ve worn these for a couple of years, and I still rotate them in with my higher end underwear.

They are definitely my top pick for the best affordable boxer briefs on the market right now.

I first heard of All Citizens on a Reddit r/malefashionadvice thread. The verdict was that these boxer briefs are incredible for the price.

They’re sort of a middle-of-the-road option: not super expensive like some premium brands, but definitely not a cheap cotton multipack.

After trying these out for a few months, I can tell you that $15/pair is a steal. These wear just as well as boxers I’ve tried from lululemon and Mack Weldon, if not better.

Plus, unlike most underwear brands, All Citizens sells their boxer briefs in different lengths and fits.

I wear the standard fit, standard length boxer, but you can get an athletic fit or longer fit if it suits your fancy.

They also have a “horizontal fly” which is a bit unique but surprisingly functional.

In terms of design, the colors are pretty basic. I have a pair in navy, and it’s kept its saturation through multiple laundry cycles.

Bottom line? If you want to upgrade your underwear without breaking the bank, I think All Citizens is a great choice.

If you’re interested in learning more about All Citizens, you can check out our full review here.

I know what you’re thinking – isn’t Lululemon where your girlfriend goes to buy overpriced yoga pants?

Well yes, it is. And maybe Lululemon realized that all those guys waiting for their ladies to try stuff on might want to buy themselves something nice. Who knows?

But they created some of the most comfortable and durable underwear I’ve ever worn.

Actually, I have to give my dad credit for finding these. I thought I had the underwear game figured out, but he swore by these boxers, and I have to say: he was right.

They’re made from Mesh Modal fabric, which is very soft and dries quickly, but they have Lycra woven in for stretch and durability.

They’re really good at wicking moisture too, so you can work out or hike in these bad boys.

They’re also available in a 7″ inseam if you prefer a slightly longer leg. I like the 7″ version with pants, but not with shorts (since I wear shorts above the knee).

If you’re searching for a well-rounded pair of boxer briefs, I recommend Lululemon.

If Lululemon is the laid back girl next door, Tani is that babe at work who you’re pretty sure is out of your league but might have been flirting with you the other day…

These luxurious under garments are cut from Micro Modal AIR, which is thinner and softer than silk.

They’re 6% elastane, so they’re pretty stretchy compared to something like ExOfficio.

In fact, they’re so soft and thin that I was sure they wouldn’t hold up well over time, but I was wrong.

I have two pairs that I’ve rotated through my underwear drawer regularly for a couple of years, and they’ve maintained their shape and color perfectly.

What really sets Tani apart from the crowd is how they look. The only word I can think of to describe these silk cut boxer briefs is “sexy.”

If looks are a priority, I highly recommend Tani. If you want something yo can exercise in, these might not be your best bet.

I got my first pair of ExOfficio boxers at REI, right before a hiking trip. I had heard great things about the brand from Tim Ferriss, who recommended them especially for travelers who like to pack light.

And he was right. These boxer briefs wick moisture, they don’t retain much odor, and they dry super fast, which makes them extremely easy to clean.

They’re a nylon/spandex blend, so they have a little stretch, but not as much as most of the other options on this list.

Also, these aren’t exactly sexy. They’re workhorses, and they’re awesome for travel, but they’re not winning any beauty contests.

I have two pairs, and I’ve worn them a lot. They’ve started to show signs of age, but that’s to be expected after a lot of use.

Since these are my go-to travel underwear, they get a lot more wear than my fancy stuff.

They’re super comfortable and durable, and they’re reasonably priced, especially on Amazon. I highly recommend trying them out, especially if you like to travel light.

There’s a whole category of men’s underwear that offers extra support by way of additional lining or built in “pouches” for your boys (plural) and even your boy (singular).

Several companies, like Saxx, have built their entire brand around this feature.

Personally, I’m okay with the traditional, pouch-less boxer brief. But some guys swear by the extra support, so if you haven’t tried it for yourself, it might be a worthwhile endeavor.

I do have one pair of Saxx that I keep in my rotation, but it’s an honorable mention because I kind of have mixed feelings about it.

While the minimal, lining style pouch is pretty comfy, and they are very flattering underwear, I’m just not sure the pouch is necessary.

I just wanted to include them so you know that this type of underwear is a thing, and it might be worth checking out, especially if you’re prone to sweating down there.

I’ve found that these ride up less than many other brands, and the wide variety of available colors/patterns are actually very flattering.

The Cool Breeze Boxer Briefs have a mesh like feel, and I much prefer this fabric to traditional cotton. It’s great for daily wear, travel and working out.

Considering the fact that some of the underwear on this list cost $25+ per pair, I think that Pair of Thieves multipacks are a pretty good deal.

In terms of fit, Mack Weldon is a hit or miss brand for me. Most of their menswear (shirts and pants) are too big for my svelte frame.

But their underwear is incredible. Of all the different underwear they offer, my favorite is the AIRKNITx Boxer Brief.

These have this soft, lightweight mesh texture that sort of disappears between your pants and skin.

The waistband is very comfortable too, which is something the brand prides itself on.

I haven’t experienced any riding up with the AIRKNITx Boxer Briefs, and I’ve worn these in a variety of scenarios, including while exercising.

One thing to keep in mind: these are fly-less boxers (no quick access for #1). For me, this isn’t a dealbreaker.

They ain’t cheap, but if you have the budget, these boxer briefs are worth every penny.

What did I miss?

You really can’t go wrong with any of these brands, and I really do think it’s worth investing a bit of hard-earned cash in higher quality undies.

What’s your favorite pair of men’s underwear? Let me know in the comments below!